Instagram’s feed will now show users recommended posts – a change that earlier this month was spotted while in testing, and has since quietly gone live. The feature, described here in the company’s Help documentation, will suggest posts for you based on those that have been liked by other accounts you follow.

The new section, “Recommended for You,” is clearly labeled so as not to be confused with your own home feed. It will contain three to five suggested posts, we’re told.

This isn’t the first time Instagram has offered recommended content. But previously, you’d have to head to the Explore section to see recommended posts and videos – they wouldn’t be pushed to your home feed. You could also see what posts friends have been liking in the Following section, if you chose. 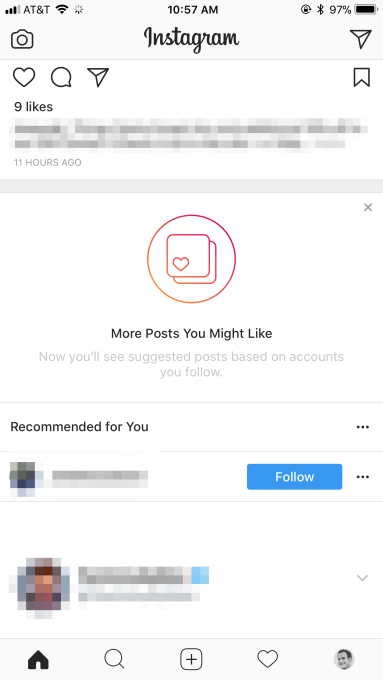 The injection of recommended content is a fairly big change for Instagram’s feed – perhaps one of the largest since the switch from the chronological feed to the algorithmic one, or the introduction of ads. It means users scrolling through their home feed will now no longer only see posts from accounts they directly follow alongside the ads. They’ll see things from their wider network, too – not entirely different from Facebook’s new Explore feed, in fact.

The change comes shortly after another update also focused on broadening users’ access to content beyond what’s being posted to those accounts you explicitly follow. Earlier this month, the company introduced a way to allow users to follow hashtags – in other words, you can now follow your interests, not just accounts.

But unlike the hashtags feature, which is opt in (as you choose if you want to track hashtags and, if so, which ones), you can’t really disable the new recommendations.

As the Help documentation explains, you can only choose to temporarily hide the “Recommended for You” section. This is done by tapping the three-dot menu above the post, then tapping on “Hide.”

The good news is that the “Recommended for You” section is not meant to displace the content you care about in favor of Instagram’s own suggestions. Rather, the section will appear after you’ve viewed all the posts in your feed, an Instagram spokesperson explains, while confirming the feature’s public launch to TechCrunch.

But even still, its appearance has irked some users, who prefer the classic experience – including, in many cases, the chronological feed.

Why does @instagram insist on showing me photos of “recommended” people on my feed? I don’t care. I wanna see pictures from people I actually follow, and chronologically at that!! Get tf outta here with recommended pages.

@instagram stop with all the extra stuff! especially please take away these recommended people I follow in my feed! if i wanted to follow them i would…..🙄

If I wanted to see recommended, I would go to the recommended page. GET OFF MY TIMELINE. THIS IS WHY I NEVER USE YOU. IM LOOKING AT YOU, @instagram!!! 🙄clear up my feed. Go back to a chronological timeline PLEASE. #overit

Not a fan of @instagram 's recommended and suggested accounts that appear in my feed. If I wanted that I'd just go to Discover. Pls.

Why can’t y’all keep the “recommended for you” in the explore feed? @instagram

I don’t even see 75% of the people I’m following posts but now @Instagram is sticking “recommended posts” in my feed. Unreal 🙄😒

Instagram says the feature, which is available on both iOS and Android, is currently rolling out. It didn’t confirm when that rollout would complete and become available to all of Instagram’s user base.