Amazon this week officially launched the first skills for Alexa offering premium content that customers can purchase while using the voice apps – a move the company had announced was in the works back in November. The ability for developers to generate money from their skills comes at an opportune time, as it turns out, given that new data indicates the rate of skill growth is beginning to slow.

In terms of the time frames involved here, skill growth was accelerating between November 2016 and September 2017, but has since slowed down over the past three months, the report also found.

That’s despite the fact that one publisher, Cumulus, this month launched a massive 300 Alexa skills with the help of XAPPmedia to bring radio stations onto the Alexa platform as individual skills. That launch likely helped the skill count in the U.S. to top 25,000 for the first time.

To be clear, Amazon has publicly stated during its third quarter earnings that the number of Alexa skills on its platform is over 25,000, but that figure includes skills available in international markets, like the U.K. and Germany. The U.S., the largest skill market, hadn’t yet reached 25,000 on its own at that time. 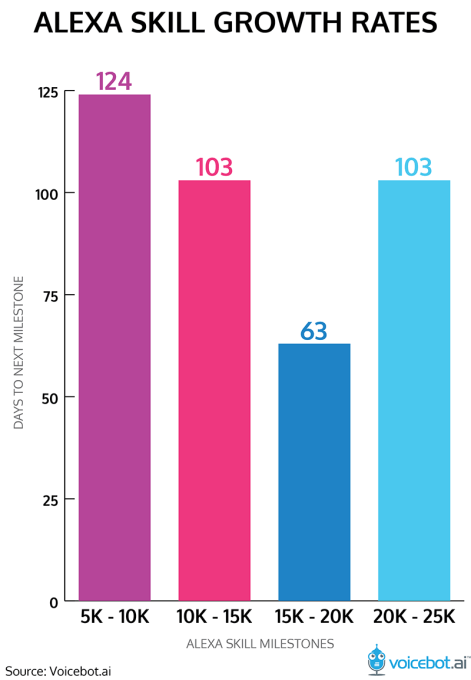 Amazon hasn’t updated the total number of Alexa skills available – it continues to tout the 25,000 number on its developer portal, for example.

This newly observed slowdown in growth may not be anything to be concerned about, however. It could just be a natural blip in the cycle, rather than a more worrisome indication that Alexa’s skill store has reached a saturation point of sorts.

In addition, the release of tools to allow developers to make money from their skills will likely soon have an impact on the market.

That includes the introduction of paid subscriptions, announced this fall, which allows developers to offer access to premium content in their skills. The first to go live with subscriptions was the popular game Jeopardy!. This was followed by the launch of in-skill content available for one-time purchase, which was unveiled recently at Amazon’s re:Invent developer conference.

Alexa users can opt to buy the extra packs via voice by saying something like, “Alexa, ask [skill name] to buy a pack.”

Beyond just fueling further development of Alexa apps, these monetization opportunities also allow Amazon to push its Prime subscription, as Prime members can buy the upgrades for a discount.

Despite the popularity of a handful of skills, largely games, there’s still some question about how important skills are to the Alexa platform as a whole.

As Voicebot noted in an earlier report, a majority of skills – 62 percent – have no ratings. That means they likely have very few users, as well. After all, skills are not really what sells Alexa devices, like the Echo. Consumers are purchasing these for easy access to music, news and information, utilitarian features like timers and reminders, and voice controls for their smart home. Skills are just a bonus.

* We’ve asked Amazon for comment on the third-party data from Voicebot, and will update if the company has a response.