Bitcoin prices are hockey-sticking on a hockey stick.

The cryptocurrency’s gains Thursday morning hit new heights, striking well above $18,000 across widely varying exchanges, coming to rest above $16,000 while the popular Coinbase exchange had been suffering major issues due to “record high traffic.”

Bitcoin was trading below $8,000 two weeks ago.

This is a truly, truly volatile game at this point; the swings didn’t appear as consequential when the market cap rested in the low billions, but as institutional pocketbooks push that cap to nearly $300 billion, the stakes are raised considerably.

What’s further disturbing is how widely the prices are varying across exchanges — there doesn’t seem to be a stable consensus on where the price is. While bitcoin prices on Coinbase’s GDAX exchange approached nearly $19,000 (!!!) this morning, others had the price sitting at thousands of dollars less. 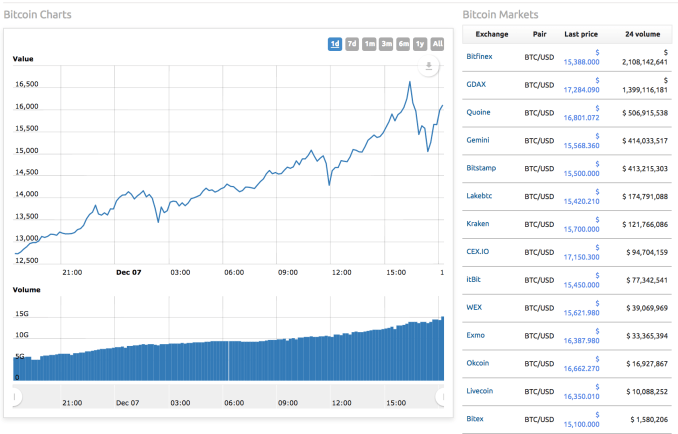 via www.worldcoinindex.com/coin/bitcoin a few minutes ago

The price is currently trading at $15,499 on Bitfinex and $17,639 on GDAX. Coindesk’s bitcoin price index currently has the cryptocurrency trading around $16,000. These figures have probably swung by several hundred dollars since I typed this sentence.

The fact that even the most established exchanges are having trouble holding consensus on price isn’t great for buyers who can stand to lose (or gain) to exchange volatility on a currency that already has volatility baked into its ethos at this young stage.

The arbitrage opportunities appear to be significant here; generally, that alone is enough to correct the markets, but extreme congestion in both the bitcoin and ethereum blockchains are making it much harder to move bitcoin and ether between exchanges. For example, New York-based Gemini had temporarily suspended both bitcoin and ether withdraws this morning because the odds of a transaction actually processing were so low.

Something to always keep in mind:

а divorcing couple divides their Beanie Baby investment under the supervision of a judge, 1999: pic.twitter.com/NkMtsEvINe