Apple is expanding its social media outreach. The company has just launched a new YouTube channel to teach people how to use their Apple devices, like the iPhone and iPad, via video tutorials. The first set of videos focus on common and fairly simple tasks, like taking screenshots, adding attachments to email, deleting photos, changing the wallpaper and more.

The videos are short, with most around the minute-and-a-half mark, and the longest being two minutes. They also include English captions for accessibility, and are formatted with instructions on the left with a demo on the device to the right.

The new channel was first spotted by 9to5Mac, which noted that Apple had before posted similar “how to” videos on its main Apple YouTube channel in the past. 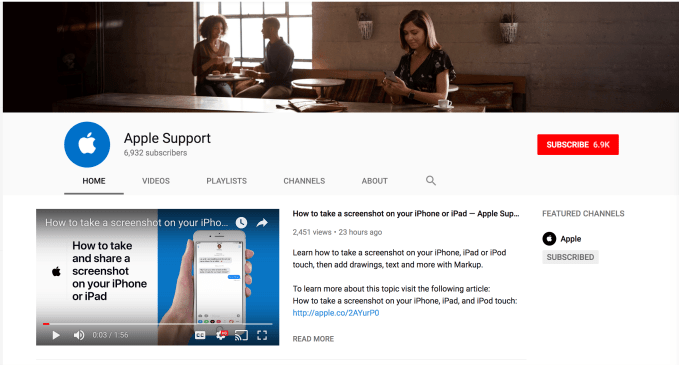 Apple has not yet made a formal announcement regarding its plans for the channel going forward, but it seems it could lend itself to a variety of tutorial videos, including those for non-iOS devices in the future, if it chose. It’s also unclear how often new videos will be posted, as the channel was initially seeded with 10 videos posted at the same time.

Already, the new resource has nearly 7,000 subscribers, and individual videos have hundreds of views apiece. The most popular, so far, is the featured video “how to take a screenshot,” which has over 2K views as of the time of writing.

This isn’t Apple’s only social media account by far.

In addition to its main YouTube channel, Apple runs Twitter accounts like Apple, Apple Education, App Store, and Apple Support, as well as an Facebook page, a couple Tumblrs, and multiple Instagram accounts, most recent addition being one to showcase photos shot on iPhone.