As Verizon’s digital media business Oath rolls on with its merging of Yahoo and Aol (which includes TechCrunch), today comes news of a significant departure. David Karp, who founded and led the Tumblr business, is leaving by the end of the year to be replaced by the social media site’s president and COO, Jeff D’Onofrio.

The news was making the rounds on Twitter, and we have confirmed it with the company directly.

“David Karp will depart Oath by the end of the year,” the spokesperson said in an emailed statement. “David founded Tumblr ten years ago as a space for the world’s creators, and we thank him for his commitment and passion driving the growth of the platform to almost 380 million blogs and over 155 billion posts. Going forward, Jeff D’Onofrio, President and COO of Tumblr, will continue to lead the team.”

And here is Karp’s internal memo, where he refers to his own “personal ambitions” as the reason for the departure. 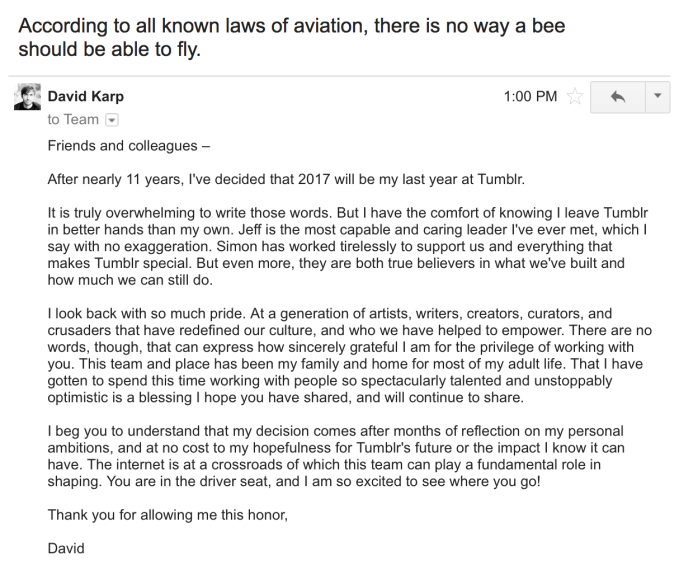 Oath — which is the combined business of Yahoo and Aol — has seen some layoffs since merging, most earlier this month when just under four percent of staff were let go (equivalent to 560 jobs). This departure we understand is not related to those layoffs.

Notably, Karp didn’t have a specific role publicised when the merger of the companies was closed.

Karp’s departure is a big deal, in no small part because he was synonymous with the brand and the business. 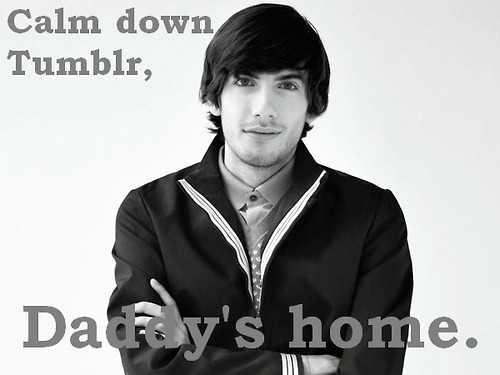 Tumblr was a marquee acquisition by Marissa Mayer when she was CEO of Yahoo, made in 2013 for $1.1 billion as it looked for more growth among younger audiences around the platforms that they liked the most.

At the time, and in months and years subsequent to that, it seemed very much like part of the allure of the startup was Karp himself, who had started Tumblr 11 years ago (as of this year) and found unexpected success with the service, which combined a blog-style format with a social network style feed, where you could follow users and skip around from place to place through links. Tumblr grew on virality and was one of the big driving forces behind the rise of GIFs.

However, there were always questions about how Tumblr would monetise its free-form audience. It also had a persistent problem with NSFW or other explicit content (which it seems to not have eradicated but made it easier to obscure it from view).

More recently, it feels like the world has moved on to other platforms to share their quirky ideas, creative musings and more practical thoughts. Tumblr’s own post traffic — one engine of its growth, the other being traffic coming to consume those posts — has been steadily dropping from less than a year after Yahoo acquired it.

I’m not sure Yahoo, or Oath, ever managed to really turn it into a money machine.