It’s been a while since my Facebook notifications feed was filled to the brim with invites to play FarmVille, but I’ve been reminded every so often at how awful those times were. It seems that tool for growing an app’s audience is not long for this world as Facebook has announced that App Invites, alongside a bunch of other developer integrations, will be sunsetting over the next few months.

These features, which also include the Native Like Button, App Links Host, Comment Mirroring, Send Button, Sharing Insights and Follow Button products, are going to be shut down February 6 “in order for [Facebook] to build new products for [their] developer community.”

With Facebook’s 4.28 SDK version, App Invites are done and there doesn’t seem to immediately be another replacement coming for developers who relied on the tool. Comment mirroring is another feature getting the boot, if you had it enabled. It allowed Facebook comments to appear on pieces of content offsite that used the plug-in; now those comments will only live on the big FB itself.

The Sharing Insights tab lived inside Facebook Analytics and has previously been a pretty significant way for Page admins to get their hands on some of the more broad trends regarding demographics of users that were sharing their content. 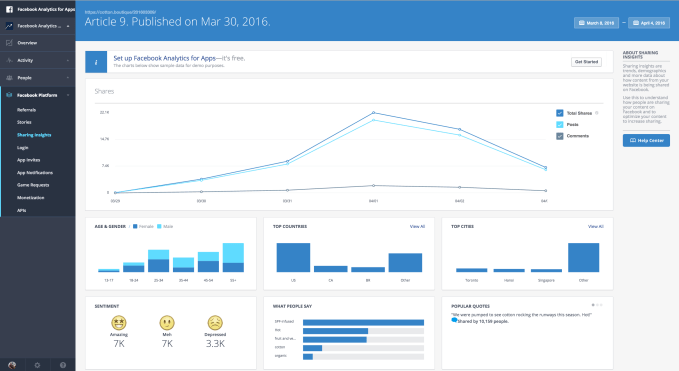 The Native Like Button for Android and iOS mobile apps allowed companies to hop into people’s Facebook feeds without even requiring them to leave the site or app they were on. Now alongside the loss of widgets like the Follow Button it seems like Facebook is done giving away freebies and wants companies and organizations to think of their Facebook page as their central home and treat it accordingly.

One trend from many of these features is that Facebook is paring down the connection between its site and the web at large as many of these products sought to enrich outside experience and may only be detracting from core experiences buried inside Facebook at this moment. These features are living on for 90 days, but no longer.