Bad news for Yelp and good news for nightlife lovers. When you want to go out, it doesn’t necessarily have to be to an event. So to help you discover bars, restaurants, and nearby attractions, Facebook is rebranding its standalone Events app as “Facebook Local”. Launching in the U.S. today on iOS and Android, Facebook Local combines events and permanent places to a single search engine powered by Facebook’s 70 million business pages plus reviews and friends’ checkins.

Facebook Local product manager Aditya Koolwal tells me the goal was to “Make it a lot easier to do certain kind of looks ups that are very common when making plans with friends.” Easier is key, considering Facebook Events never made it above #139 on the social networking app charts and SensorTower estimates it only got 100,000 downloads.

For now, he tells me Facebook Local won’t feature ads from businesses and events trying to stand out, but says “we’ll think about advertising way further down the line.”

Back inside Facebook’s main app, the Nearby feature that’s buried in the More tab is getting rebranded as “Local” too. But there, it’s still separate from Facebook Events. While Koolwal says he hasn’t thought about it, the Facebook Local app could one day be a good home for Facebook’s Nearby Friends, which shows real-time locations of your friends similar to Snapchat’s Snap Map. Facebook’s recently launched Order Food feature could also be a smart addition if you and friends decide leaving the house is too much work. 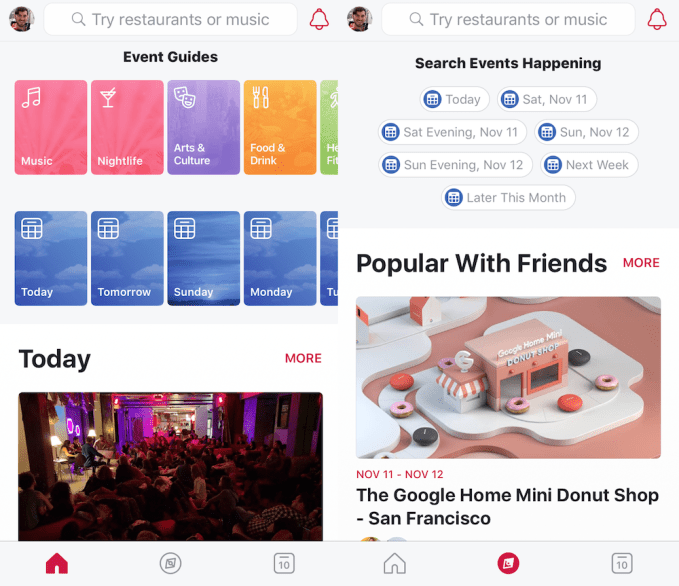 Facebook first launched the Events app just over a year ago to help that one friend who rallies everyone to go out and figure out where. It was useful for seeing Event invites and wall posts in one place, and seeing nearby happenings on a certain day. But it was a bit buggy, redundant with the main Facebook app’s event feature, and ruled out places that were fun every night rather than just when they threw parties.

Facebook Local could help you pick between great bars on a block, and find out if one has a band playing. Here’s how the app works:

Facebook Local’s home page shows shortcuts to see nearby restaurants, cafes, drinks, attractions, and more, as well as where friends and people you follow go. You’ll see a calendar of your day’s Events, a Trending Events feed, guides to music, nightlife, art, and other happenings, and options to see everything going on certain days. 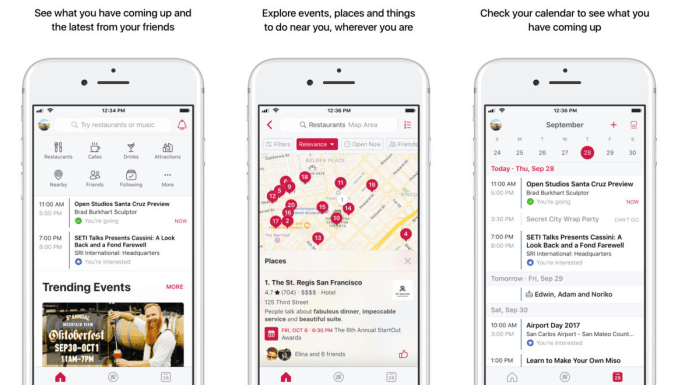 A Discover feed shows top suggestions and what’s popular with friends. And a Calendar tab lays out all your Event invites and RSVPs, and you can import your phone’s calendars to have everything in one spot. If you’re travelling, Facebook Local lets you change your location to see what’s up in another city. For now, you can’t order directly from Local like with the Facebook app’s Order Food feature, but restaurant Pages do sometimes include a link to a deliverer like Grubhub.

Even if you don’t use the standalone Facebook Local app, you’ll still benefit. Koolwal tells me Facebook and Local share the same code, so when it improves something like the ability to search for ‘cappuccino’ not just ‘cafes’, those “enhancements reflect back to Facebook immediately.”

If Facebook actually promotes the Facebook Local app, it could become a legitimate alternative to Yelp or Foursquare, using both Facebook’s wide range of local business data with your social graph and user generated content like photos and reviews. That in turn could convince businesses to invest more in their Facebook Pages, turn all their offline happenings into Facebook Events, and seek more social content from their customers.

Facebook’s new mission is “Bringing the world closer together” and few things do that as vividly as nightlife. The company is often criticized for supposedly isolating people, but there’s no replacement for Facebook Events. When I hear people considering deleting their Facebook account, it’s often Events that they stay for. By bundling these with local business listings, Facebook could finally give Events the spotlight they deserve.