650 million people use Facebook Events — 100 million every day — but it’s a smaller sect of hardcore extroverts who discover these parties and meetups, then invite everyone else.

Now Facebook is giving its most outgoing users a dedicated app for browsing and searching for stuff going on nearby. And thanks to the Facebook Events app’s ability to pull in calendars from your phone, you can see all your plans in one place, so you know when you’re free.

The Facebook Events app launches today on iOS in the U.S., and is coming soon to Android. Facebook’s core app will still offer its Events feature, so you won’t be forced to switch like with Messenger. Facebook is still considering how to promote or shortcut to the standalone product from its core app.

Facebook Events product manager Aditya Koolwal tells me, “The core thesis behind this app is that if we build something for the people really eager to discover events, people will have a good time.” The bigger goal is to find out which features work so the company can “take the best parts and put them back in Facebook.”

Events is perhaps Facebook’s most unique, differentiated feature. While you can create profiles, share content and chat on tons of services, there’s no real substitute for Facebook Events. 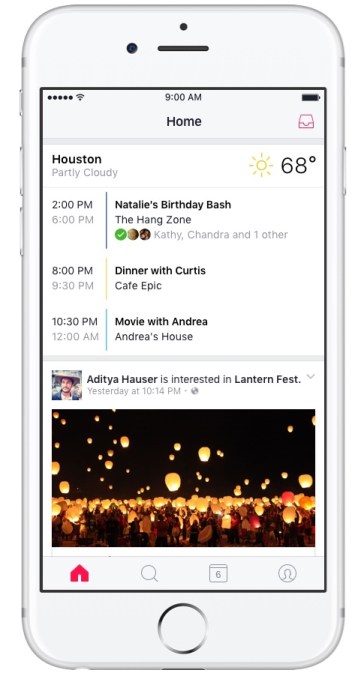 By doubling down with a standalone app, Facebook could make itself even more indispensable. Attending social, cultural and professional events creates memories people attribute to Facebook’s help. Events are also where people make new friends and take photos that end up bolstering Facebook’s network.

And if event promoters can get more organic reach thanks to the Events app, they’re more likely to post their events to Facebook and even pay to promote them with News Feed ads. It broadens the funnel of promoters who might potentially pay, Koolwal believes.

Events is one of Facebook’s oldest features, having launched in 2005. But while steadily growing, it was neglected until 2011 when Facebook began trying to recommend local happenings. Facebook ramped up the redesigns and recommendations in 2014, around when Mark Zuckerberg first suggested it could eventually get its own app. Events hit 450 million Events users by 2015, and this summer it started offering “Featured Events,” picked by human curators in major cities.

Last year, Facebook shut down its standalone apps incubator “Creative Labs” and several of its products, including Slingshot, Rooms and Riff. But Koolwal tells me, “Individual project teams do have some degree of autonomy to develop things.” Over the last few months, his crew has been running Events app alpha tests to find out what users would want in a standalone product.

“We went directly to the community. We did several trial runs in six cities across the U.S. with a few hundred people using it,” Koolwal explains. Users asked for easy browse-ability, powerful search and a simple way to know what was coming up.

When you launch Facebook Events, you’ll immediately see Events you’ve been invited to or RSVP’d to that day. Scroll down and you’ll get a feed of Events that Facebook thinks would interest you, based on what friends are going to, your location, your Interests, Pages you’ve Liked and other signals. 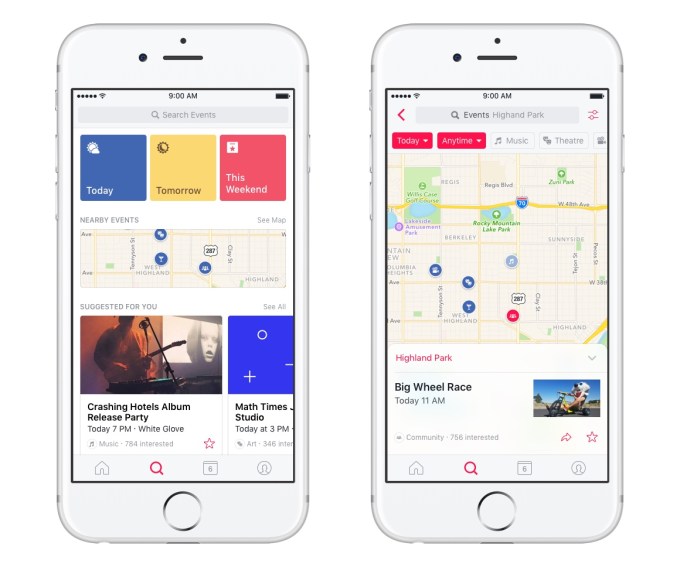 In the Search tab, you can instantly tap tiles to browse what’s up today, tomorrow or this weekend. A map lets you see events by location, which you can move around in case you’re planning a vacation or a venture to the far side of town. The search feature lets you choose certain characteristics like day, time and genre, so you can just see concerts or theater shows.

Koolwal recounts how his team was leaving a bar in San Francisco and they didn’t want to go home. One member suggested trying to find a comedy show, so Koolwal set the Events app’s search feature to find them a comedy event nearby that night. Minutes later they were in Cobbs’ Comedy Club, at an event none of them had been invited to but that was finally more discoverable.

Lastly, the Calendar feature lets you pull in your iPhone’s calendar to show you all your appointments in one place. You can sync other calendars, like Google’s, to your phone, then sync that to Facebook to pull in appointments from wherever. Koolwal says there was some hesitation amongst the team about whether to build the calendar in because it might seem too utilitarian compared to the glossy event pages people can browse, but testers wanted it. He says don’t expect a Facebook app solely for calendaring though, as the space seems pretty well handled already.

If extroverts enjoy the standalone app, it could help them dispense invitations to the rest of Facebook’s network, getting more users involved in the feature.

When I talk to people who are grumpy about the world’s incessant social media usage, many say Events is one of the features that keeps them on Facebook. While you can make profiles, share content and chat on tons of services, Facebook is still the only place to see what things friends are attending, and join in.

Facebook has long been criticized for isolating us from the real world, encouraging us to watch it through a screen instead of live it. But if the social network can find you a gallery opening, résumé workshop or tailgate in your neighborhood, that might offset those nights alone scrolling the feed.