Apple is soft-launching direct, person-to-person payments in an iMessage today with the Apple Pay Cash beta. The feature, which was announced earlier this year, allows you to send and receive cash inside the Messages app on iPhones.

The program is launching in public beta today on iOS 11.2 beta 2, and you can opt in using the iOS Public Beta program here. Once you’ve updated, you’ll see an Apple Pay button in the apps section of Messages that allows you to initiate a payment. Payments can also be triggered by simply asking for money in a message or tapping on a message sent by someone else asking for money.

The beta is available for U.S. customers only with iOS devices on 11.2 or later and with two-factor authentication set up on their Apple ID.

The source of funding is any debit or credit card you have currently added to Apple Pay. Apple will charge no fees for money that is funded via debit cards and an ‘industry standard’ fee for credit cards, likely in the few percent. 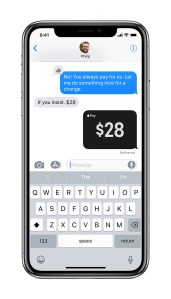 The first time someone sends you money, you will opt in to accept it and be issued a new virtual Apple Pay Cash card. This card can only be used to send money or pay for things via Apple Pay, so it’s not a completely discrete “credit/cash card”, but it functions as one as long as you’re within Apple Pay. The reason for the card is multi-faceted, but one big one is that this allows Apple to fund payments to the card immediately. This means that when you get paid via Apple Cash, you’re going to be able to spend that money right away as long as it’s via Apple Cash to someone else or via Apple Pay at a retailer or website that accepts it.

The card also functions as a transaction log for all of your Apple Pay purchases on the web or at physical locations. Just tap on the ‘i’ icon to flip the card in Wallet to see them. You can also add money to the card from this screen from any funding source. Touch ID, passcode or Face ID are used to verify any Apple Pay Cash transaction.

When you get money for the first time, you’ll tap on the payment bubble to accept terms, the card will get generated and put into your wallet and the balance will instantly appear on that card. From there you can use it or transfer it out to your bank (with the normal transaction times).

This isn’t a card that anyone can just ‘use’ like a credit or debit card though. If, for instance, you’re splitting rent and your roommate pays you for their half you have the following options:

Otherwise, they’d have to be an Apple Pay merchant for you to just boop your phone and pay them on a terminal or via the web.

The Apple Pay Cash card in has an iridescent effect matched to gyro – just like a 'holo' on a real card. Someone in  design having fun. pic.twitter.com/8u3pI38tGB

I’d be remiss if I didn’t mention that there are already several very widely used person-to-person payment systems out there like Square’s Cash, Venmo, AliPay and WeChat Pay. Apple is certainly doing a job of ‘validating their space’ with this launch, but I’d expect some press from those firms with a variety of vanity metrics and differentiating factors like “cross platform,” “social” and “popular with youths”. I personally really like Square’s Cash a ton and my close group has long used it to pay each other back and balance our friendship books. It will be interesting to see how Apple Pay Cash affects that behavior among people who have mixed iPhone/Android usage.

Sending and receiving works pretty much as you’d expect. If you ask for money in a text, say ‘hey you owe me $10 for movie tickets’, the other party can tap on the underlined dollar amount and send it. You can also use the Pay Cash app in Messages to send a formal request, they’ll see that and can tap to pay. When they send it you’ll get a notification and you tap on that to accept the money. You can choose to automatically accept payments or not in settings. The first time you use it you’ll have to accept the money within 7 days. 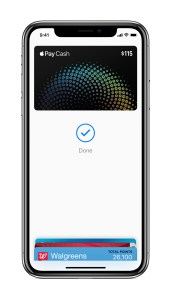 You can also send money directly from the Contacts app in iOS by tapping a contact and then the $ icon below their name. Siri, of course, is also involved and you can use it to send money or request money from a friend. Saying “ask Sally to pay me $10 for breakfast” will send that message via Messages and they can tap and pay.

Apple Pay Cash provides the vital person-to-person leg of Apple’s payments stool. The journey began back in 2012 when it introduced Passbook, a place to hold airplane tickets and other coupon-type stuff. Even back then, it was clear where Apple was headed with this. I remember writing extensively about the way Apple was building up to offering a payments platform:

Say Apple hooks up an iPayment card of some sort to your iTunes account and tucks it into Passbook. Perhaps you enter a passcode to get into Passbook, then type in your Apple ID and it generates a 2D code, then you scan it, and the code expires after a billing has been made to it. Or the URL can require a passcode, generating a new link for each transaction…Unless, and this comes back to trust, Apple required a direct connection to your bank account to enable your Apple ID for direct payments. This would be a hard sell, but it would be making that pitch to people who have already trusted credit cards to it for some time, so it’s not as outlandish as you think.

Back then, we were still in a big trust deficit hole with mobile payments (and QR codes are still finding their place) but the years since have proven that people are willing to pay with their phone. An impressive recent stat notes that 50% of all US retail locations now accept Apple Pay and that 90% of all mobile contactless transactions in markets where it is available are done with Apple Pay. Clearly, people get that money and mobile go together, and they’re becoming more willing to treat a digital wallet like their physical wallet.

The fact of the matter is that people, by and large, are not ready for mobile payments. I’m probably not even ready and I’m an early adopter. This is why other technologies like NFC haven’t taken off for Google or other mobile makers that have tried to make it happen.

There is a trust threshold that hasn’t yet been breached by any major company, although services like Square are making headway. Apple is uniquely positioned to take its current cachet with regards to credit cards and build on that through the redemption of passes and gift cards through Passbook. Once it has this kind of trust, it can use NFC hardware in a future phone to further expand its payment options.