The iPhone X is already showing strong consumer adoption, according to a new report from Localytics out today, despite the fact that long shipping delays for pre-orders mean many customers have yet to receive their devices. That said, iPhone X managed to grab 0.93 percent of the overall market share for iPhones after the first weekend of sales, the firm found.

To be clear, this data isn’t referencing iPhone sales – it instead measures market share based on consumers’ app usage. Localytics runs a mobile engagement platform across 2.7 billion devices and 37,000 mobile and web apps, which is how it’s able to collect this data. For this specific report, the firm says it examined over 70 million iOS devices. It then compared this weekend’s data (Nov. 3, 2017 – Nov. 5, 2017 at 2 PM ET) to historical data on older iPhone models. 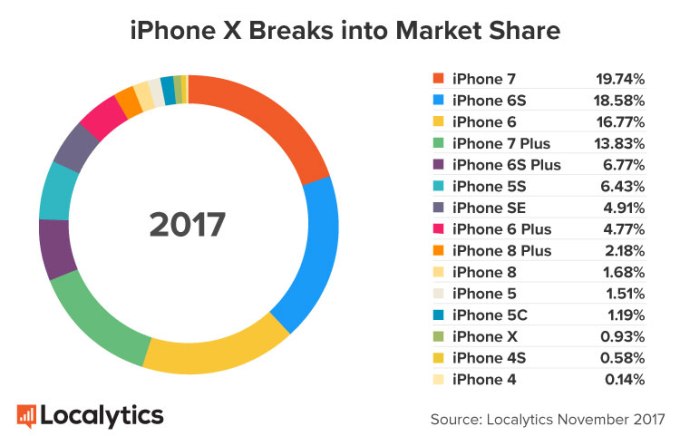 Though 0.93 percent of iPhone market share may not seem like a lot, it still puts the new iPhone X ahead of the 0.7 share achieved by the iPhone 8 models in their first weekend, which may indicate a stronger demand for Apple’s high-end device compared with the more moderate – or as many pundits have said, more boring – upgrade.

In addition to the iPhone X’s more limited availability at launch (20 cities’ retail stores even sold out by Sunday), Localytics cautions that historical comparisons may not be the best way to analyze the new device’s popularity.

For one thing, the company explains, there are “significantly more iPhones in the market today than in 2014.” In other words, Apple isn’t just competing against rivals for market share, it’s competing against itself.

While shipping delays may already be improving, the market share data for the first weekend may not be the best way to measure the iPhone X’s adoption, but it’s what’s available for now. In a few months’ time, the data may tell a different story. Localytics is predicting the Phone X will end up grabbing more of the overall iPhone market share than any of its predecessors did during their first few months on the market, even if it didn’t do so for the launch weekend.

That coincides with Apple’s own forecast that its its holiday 2017 quarter will be one of its best ever thanks to iPhone X sales.