Amazon-owned game streaming site Twitch is continuing to see solid growth, according to a new report from Streamlabs, which found that Twitch increased its numbers of concurrent streamers on the platform by 67 percent in the third quarter of 2017. That growth is being attributed, in part, to Twitch’s newer initiatives focused on allowing smaller streamers to generate revenue from their channels through things like subscriptions, virtual tipping and game sales.

However, the growth in streamers using Twitch hasn’t yet paid off in terms of concurrent viewers, the report also found.

In Q3, the number concurrent viewers remained roughly the same. This could be because it takes time for the newer streamers to gain a following and grow their audiences, the company theorized. It’s estimating we won’t start seeing the actual impact of the additional streamers on Twitch’s platform until either Q4 2017 or even Q1 2018. 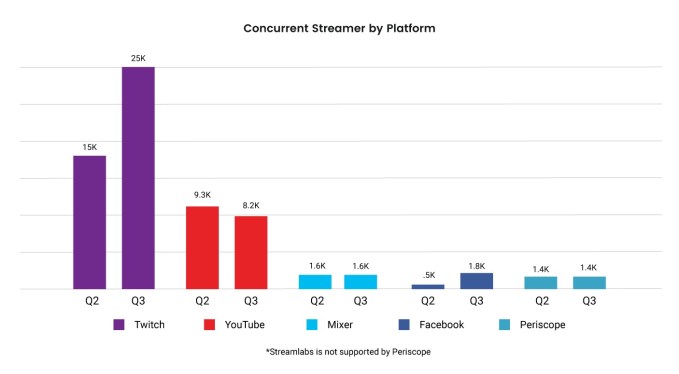 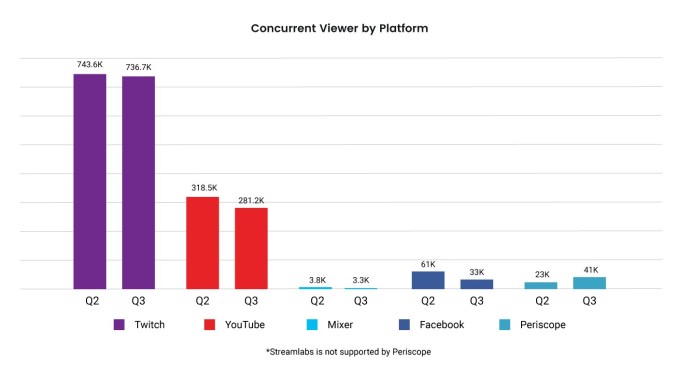 Today’s market for gaming video streaming is huge – over 600 million viewers in 2017, according to another third-party report, and continuing to grow. But things are also changing quickly, with YouTube, Twitter’s Periscope, Facebook Live, and Microsoft’s Mixer all competing with their own live video products.

Twitch, however, seems to be running away with the market for now, with 25,000 concurrent streamers on its platform in Q3, compared with second place YouTube Gaming.

In fact, this represents a 12 percent decline in average concurrent streamers’ and viewers’ growth on YouTube, Streamlabs found.

That said, overall, YouTube Gaming grew more quickly than Twitch in Q3, with a 56 percent increase in monthly active streamers (not concurrents) on Streamlabs’ platform compared to Twitch’s 16 percent growth. In other words, YouTube is gaining streamers and viewers, but they’re less engaged. 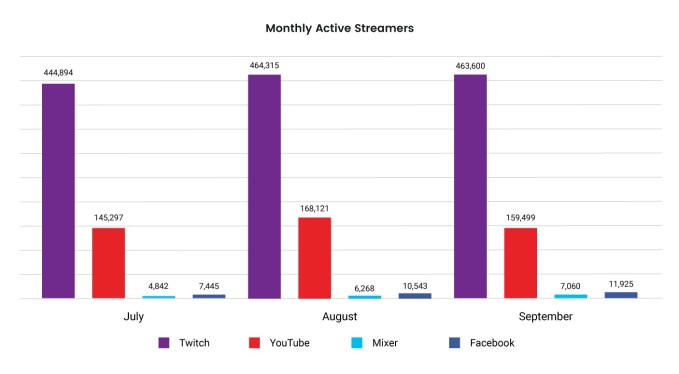 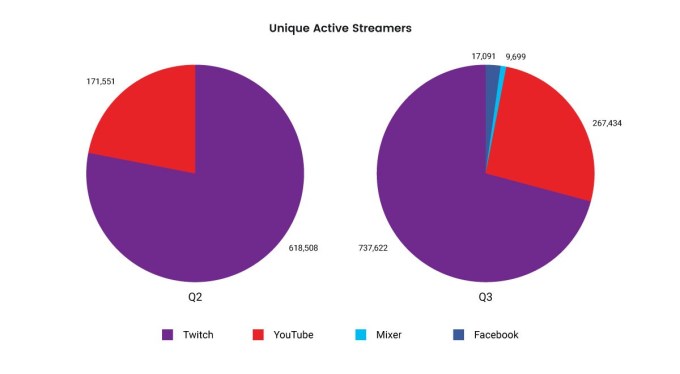 One notable finding from Streamlabs’ new data was Periscope’s growth.

In Q3, Twitter’s live streaming service increased 80 percent in concurrent viewers to reach 41,000. The figure points to live streaming’s potential to be a growth opportunity at a company that’s otherwise been historically challenged with regard to signing up new users in large numbers.

Twitter recently surprised everyone with the addition of 4 million new users last quarter, but the overall user base only grew by 2 million because Twitter had been miscounting its user numbers. However, the company attributed its growth to making the service easier to newcomers, not to live video.

Another big reveal from the new report has to do with monetization of live streams.

One of the more popular ways that streamers generate revenue is through virtual tipping. Twitch offers Cheering with Bits, and YouTube followed with the introduction of Super Chat in January.

Streamlabs found that virtual tipping like this is on the rise, more than doubling from 2015’s total of $43 million to reach $100 million this year. Streamlabs itself processed $25 million in Q3, outpacing 2016 by 25 percent, it says.

The number of monetized channels that received tips during Q3 also grew by 14 percent. 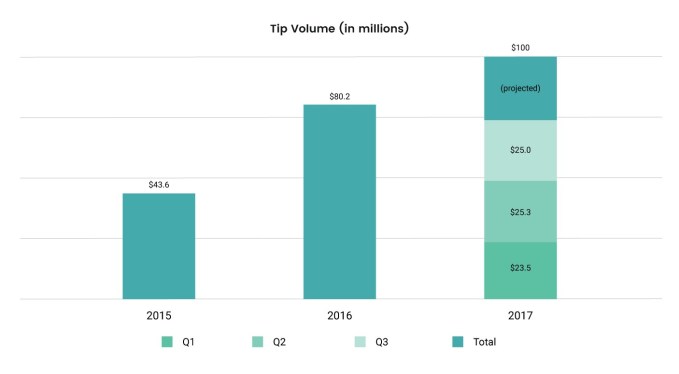 The reports’ data comes from Streamlabs’ platform, which offers a suite of tools that help streamers grow their channels. However, it should be noted that its report doesn’t include YouTube Live, only YouTube Gaming; and it only can see the public Facebook Live broadcasts, not those that are friends-only.

The full report will be available on Streamlabs’ website on Tuesday.