It pains me to have to write this, but write it I must as the past week’s events have shown there are surprisingly many people in Silicon Valley who wouldn’t know what sexual harassment was if it slapped them on the behind without permission.

There are many cases that could be useful as a launching point; let’s start with the recent and lengthy rebuttal of so-called tech evangelist Robert Scoble, following multiple allegations that he has sexually harassed and assaulted a number of women in the industry where Scoble has made his name.

As Scoble wrote in his own defense, on his personal blog this week, “If I were guilty of all the things said about me, I would still not be in a position to have sexually harassed anyone. I don’t have employees, I don’t cut checks for investment. None of the women who came forward were ever in a position where I could make or break their careers. Sexual harassment requires that I have such power.” 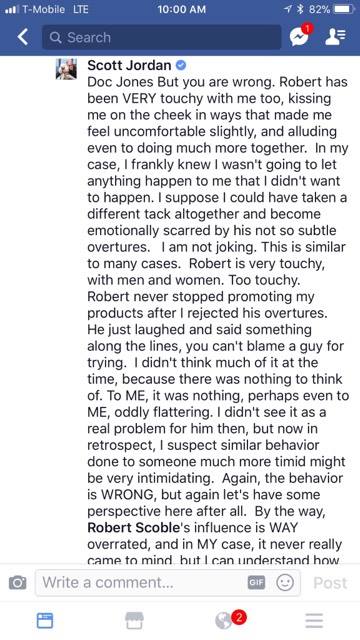 Scores of supporters came to Scoble’s defense in the aftermath of the allegations. Scott Jordan, CEO of Scottevest, was one of the most outspoken, writing on Scoble’s original apology post (now made private) that because Scoble was inappropriately touchy with him in the past —  in a way that made him feel uncomfortable but didn’t emotionally scar him — he didn’t think much of it at the time. After this story was published Scott sent over the following quote saying, “My original point in the Facebook response was that in some cases the victim will simply decide that the actions did not rise to the level of filing a report, as in my case. I am not defending Robert’s alleged behavior in any way, shape or form. I was trying to sum up a very complicated issue by stating there are degrees of harassment and the victim may not feel as offended as other people similarly situated.”

That’s an alarming revelation on its own, obviously. But it’s also a false assumption that just because someone doesn’t think much of something like this that it is not harassment, according to the U.S. Equal Employment Opportunity Commission (EEOC), which defines harassment as “unwelcome sexual advances, requests for sexual favors, and other verbal or physical harassment of a sexual nature.”

Put another way, you also don’t have to be directly in charge of someone or cut their check to harass them. States the EEOC, “The harasser can be the victim’s supervisor, a supervisor in another area, a co-worker, or someone who is not an employee of the employer, such as a client or customer.”

Yet there are other wrong-headed assumptions — many of them.

Take the idea that if a perpetrator was drinking at the same time that he or she was harassing another person and thus impaired by alcohol, that person should not be held accountable for their actions. This one relates to Scoble, too, who posted about going sober in 2015 and who has routinely mentioned that his poor behavior can be traced to a time when he’d been drinking, as if that excuses anything.

It doesn’t, including from a legal standpoint. “Voluntary intoxication is not a defense to sexual harassment or assault,” says Chris Baker of Silicon Valley sexual harassment law firm Baker Curtis & Schwartz. “The law does not think much of the argument that people are free to break the law so long as they are drunk when they do it.”

How about the defense that’s most frequently used to normalize harassment — that it’s just a man being a man? This argument was used by JunoWallet exec Chris Sweis, who penned a Medium post in July, titled “I just watched the public neutering of a good man Dave McClure and cannot keep my mouth shut about it.” In his ode to McClure, Sweis writes, “That is what MEN do…We pursue women and women dress to be pursued, wear perfume to be pursued, and in Silicon Valley there are MANY WOMEN who dress to be pursued.” In other words, boys will be boys, and besides, the women were asking for it.

Sweis, rightly, took a lot of flack for that post. However, the idea that these are good guys just being men continues to pervade the tech landscape. We see it in the attitudes of many of Scoble’s Facebook commenters. It’s on Medium and Twitter. It’s there, in print, in the comments section of my TechCrunch post about Scoble allegedly carrying on after going sober.

To defenders of this brand of thinking, calling out bad behavior is akin to a “witch hunt” (a strange label, considering the historical context of witch hunts). These women’s stories of being groped and propositioned aren’t unnerving so much as they are “lame examples of harassment.”

In fairness, shades of gray do occasionally exist, and no one should be judged prematurely.

DFJ cofounder Steve Jurvetson’s is being investigated for misconduct, but for what precisely isn’t yet clear. One founder wrote on her Facebook page that there is rampant “predatory behavior” at the firm, yet this person has also said the two had a personal, not professional, relationship.

Meanwhile several women familiar with the inner workings at DFJ insist that it’s simply not true that the firm treats women poorly, and two of them have come to Jurvetson’s defense specifically.

There are many things that women might wish were against the law but are not, too.  I consider it harassment when I’m whistled at, told to smile, or offered sexually suggestive comments while walking down the street. Each makes me feel unsafe. Legally, however, I have no defense.

Similarly, when Scoble allegedly touched the knee of Michelle Greer, who worked with him at Rackspace for two years, she felt harassed and she says that feeling affected her work performance.

Yet what Scoble did isn’t necessarily against the law, according to Baker, who suggests that “quid pro quo” harassment is a step beyond what transpired between the two. Specifically, says Baker, it’s when “someone conditions an employment or commercial benefit on putting up with, or accepting, sexual advances or conduct,” he says.

Of course, to victims of harassment, whether the harassment is technically legal or not  isn’t really the point. “Anyone who defends abusive and harassing behavior by claiming it doesn’t violate the law should consider why their bar is so low,” says Paradigm founder and CEO Joelle Emerson. “Harassing behavior, whether it fits within a context anticipated by employment law or not, is incredibly harmful. It threatens physical and mental health. It depletes cognitive energy. It stalls career growth. It reinforces stereotypes, and perpetuates social inequality. Anyone that wants to argue, ‘But hey, it’s technically legal!’ should know what it is they’re defending.”

So why the apparent confusion in the industry over what, exactly, constitutes sexual harassment? Emerson has a theory or three. “I think often people who defend harassing behavior do so because they have engaged in such behavior themselves. Or they defend individuals accused of this behavior because they believe them to be generally ‘good people.’ Or, as a rule, they just don’t believe women.”

Certainly, as we’re seeing — be it claims about Scoble or McClure or Donald Trump or Harvey Weinstein —  not only are some people willing to defend the actions of the accused, but they’ll also question the women who come forward, even when there are scores of them. 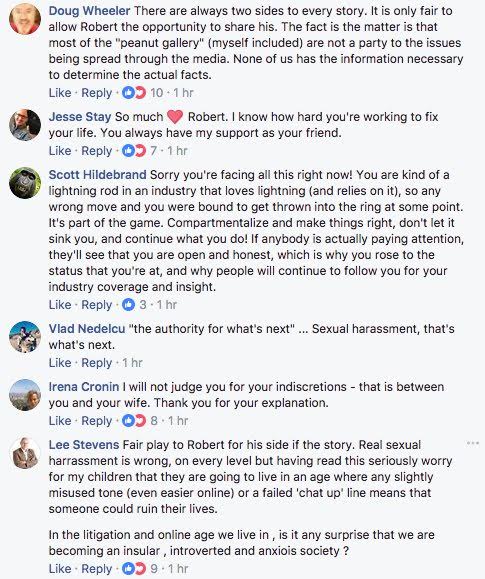 Some have a financial incentive to question the people who come forward with stories about their harassment. Scoble, for example, is listed on Bloomberg as sitting on the advisory board for Scottevest, though Jordan has told TechCrunch there are not financial ties between Scoble and Scottevest now nor have there been in the past. The two have been involved in other endeavors together as well, such as Tech on Deck. Others look to Scoble’s influence in tech, with the hope that he’ll plug their product. For others still, it may be as Emerson suggests — that, as a rule, they just don’t believe women, depressing though that prospect may be.

The one bright spot here is that after decades of repression, women — and even some men —  are coming forward in droves to out their perpetrators. They have suffered under the weight of this type of abuse, and they’re finally able to have their day.

Others are starting to wake up, to take action to protect those of us who wish for a safer, less hostile environment.

Unfortunately, it looks like we still need to spell out what constitutes a bad actor to some who either don’t know or don’t wish to know that someone who they admired might not be the “good guy” they thought all along.

*An earlier version of this story said Scoble was on the advisory board of Scottevest. Though listed online as such, this is no longer so, according to Jordan. We’ve since updated the piece.