There’s no shortage of companies — both legitimate businesses and the seemingly endless supply of spammers who’ve found my email address — promising to improve your performance in online search.

But founder and CEO Ian O’Rourke said Adthena is doing something different, because it uses artificial intelligence and machine learning to create what it calls a “Whole Market View.”

Basically, that’s a visualization of the entire set of keywords, in both paid and organic search, used by a business and their competitors. That visualization helps them see areas where they’re missing out, and therefore where they should be spending their search marketing dollars.

O’Rourke told me via email that without Adthena’s AI, other companies can’t respond as quickly to shifts in the market, because they rely on humans “not only to interpret and action the data, but to also make selections across vast possible keyword sets, again making it impossible to process at the same scale as an AI-driven tool.”

He added that in addition to helping customers find the right keywords, Adthena can also identify instances of “brand infringement,” where “aggregators and travel providers may often bid on an airline, hotel or cruise brand term in order to promote their own sales. … The result is that travel providers end up often having to pay prime pricing for their own brand terms.” 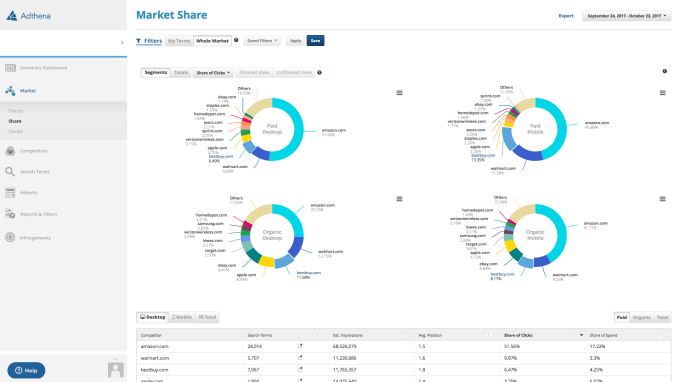 Companies using Adthena include Hotels.com, HSBC and Atlassian. And while it’s been focused on the Europe until now, the London-based startup is finally launching officially in the United States.

Adthena was founded back in 2012, which means it’s waited five years for this U.S. launch. O’Rourke explained that he didn’t raise institutional funding at first, and with “the scale of being successful in the US market,” he knew it would take a serious investment to have “the appropriate resources and maturity of technical solution.”

But he said the company is ready now, thanks in part to an investment of undisclosed size from Mel Morris, the former chairman of Candy Crush-maker King Digital, who’s also joined the Adthena board.

“Search-enabled customer acquisition needs to be smarter – its scale demands the use of AI and machine learning,” Morris said in the announcement.