BBVA, Spain’s second-largest bank that snatched up mobile banking startup Simple for $117 million back in 2014, is now entering the mobile money transfer business with today’s launch of a new app called Tuyyo. The app, which is available on both iOS and Android, is focused on the $73 billion annual market for remittances to Latin America and the Caribbean from the U.S.

However, the service is initially launching with money transfers from the U.S. to Mexico, where the average amount sent by U.S. workers is about $1,900 per year, says BBVA. It also notes that the U.S. to Mexico corridor sees over $27 billion flowing between the countries annually, making it one of the world’s largest.

Tuyyo (whose name spelled out as “tu y yo” would mean “you and I” in English), will later roll out to the rest of Latin America, following its pilot testing phase.

For now, the new app only allows U.S. users to send money to family and friends in Mexico. Within minutes of receiving the funds, the recipient can pick up their money at thousands of cash pickup locations or at any of the 11,000 Bancomer ATMs across Mexico, even without a bank card or account. In addition, funds can be sent directly to a bank account at BBVA’s partner banks.

The app has a social component as well. In addition to sending funds, users can optionally add a personal message with a photo, that’s shared in the app and sent via SMS, WhatsApp or email. In a later version of the app, BBVA says users will be able to send voice and video messages, too. 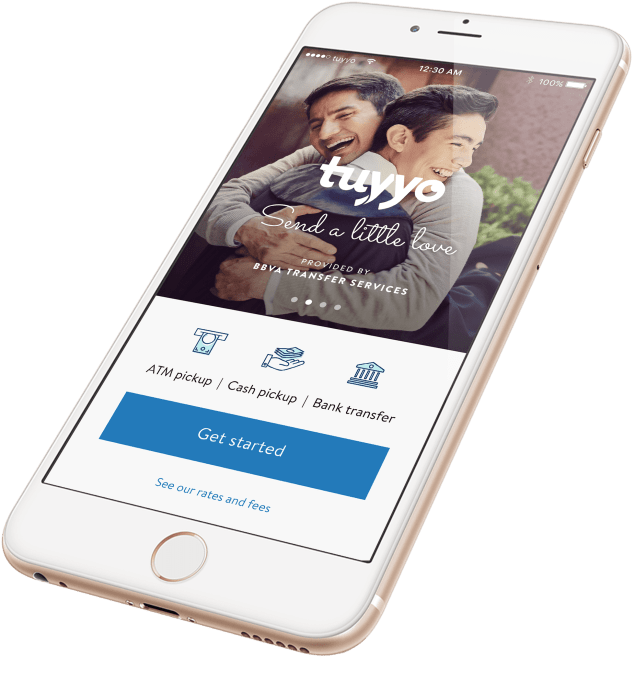 Also in a future release, Tuyyo will add support for insurance and micro-financing, with the sender paying bills through the app. For example, the sender could buy a new refrigerator where installments are paid through Tuyyo directly to the retailer.

The first transfer with the Tuyyo app will only include the FX (foreign exchange) costs, but won’t charge a fee. Afterwards, the flat fee of $5.49 will be added to the FX rate. (TransferWise’s flat fee for Mexico is $3, plus 1% of the amount sent, for comparison).

First-time recipients will also have to visit a BBVA Bancomer branch to verify their identity and receive their ATM code that they’ll later use to withdraw funds.

“People feel a strong sense of duty to help out their families,” said Derek White, Global Head of Customer ands Client Solutions for BBVA, in a statement about the app’s launch. “This is one way to say, ‘We still love you even if we can’t be together right now.’”

(Continuing this theme, app’s website even has a domain name that ends with “love” – www.tuyyo.love).

Tuyyo will compete with a number of money transfer services on the market, including fintech unicorn TransferWise, Remitly, WorldRemit, PayPal’s Xoom, Western Union, and others.

The launch comes at a time when BBVA is trying to reinvent itself as a digital business that’s as nimble as a fintech startup, a recent report by The Economist says. BBVA’s executive chairman Francisco González told the news organization that he expects that, eventually, his competitors will be internet giants like Facebook, Google and Amazon, and that BBVA needs to not operate as a bank but rather a “digital house.”

To that end, it has over the past few years acquired big data company Madiva; digital design specialist Spring Studio; digital banks in the U.S. and Finland plus 29.5 percent of British online bank Atom. It also invests in fintech startups via its VC arm, Propel, the report noted.

Tuyyo is live today as a free download on the Apple App Store and Google Play.