Facebook wants tbh to be its next Instagram. Today, Facebook announced it’s acquiring positivity-focused polling startup tbh and will allow it to operate somewhat independently with its own brand.

tbh had scored 5 million downloads and 2.5 million daily active users in the past nine weeks with its app that lets people anonymously answer kind-hearted multiple-choice questions about friends who then receive the poll results as compliments. You see questions like “Best to bring to a party?,” “Their perseverance is admirable?” and “Could see becoming a poet?” with your uploaded contacts on the app as answer choices.

tbh has racked up more than 1 billion poll answers since officially launching in limited states in August, mostly from teens and high school students, and spent weeks topping the free app charts. When we profiled tbh last month in the company’s first big interview, co-creator Nikita Bier told us, “If we’re improving the mental health of millions of teens, that’s a success to us.” 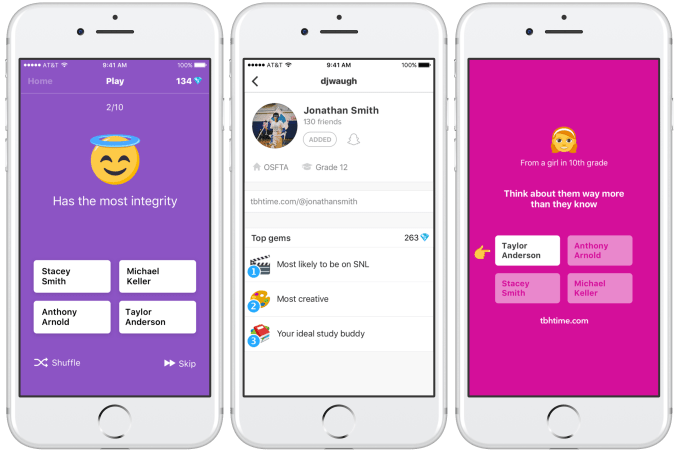 Financial terms of the deal weren’t disclosed, but TechCrunch has heard the price paid was less than $100 million and won’t require any regulatory approval. As part of the deal, tbh’s four co-creators — Bier, Erik Hazzard, Kyle Zaragoza and Nicolas Ducdodon — will join Facebook’s Menlo Park headquarters while continuing to grow their app with Facebook’s cash, engineering, anti-spam, moderation and localization resources.

The tbh team wrote in an announcement post that “When we met with Facebook, we realized that we shared many of the same core values about connecting people through positive interactions. Most of all, we were compelled by the ways they could help us realize our vision and bring it to more people.”

In a statement to TechCrunch, Facebook wrote: “tbh and Facebook share a common goal — of building community and enabling people to share in ways that bring us closer together. We’re impressed by the way tbh is doing this by using polling and messaging, and with Facebook’s resources tbh can continue to expand and build positive experiences.”

It’s interesting that Facebook opted to acquire tbh rather than clone it, since it has been aggressively copying other hit teen apps like Houseparty recently. While Facebook’s Snapchat clone Instagram Stories has achieved massive popularity, other knock-offs it has made haven’t fared as well.

With tbh’s strong brand name, distinctive design and explosive early traction, Facebook seems to have decided it was better to team-up than face-off. 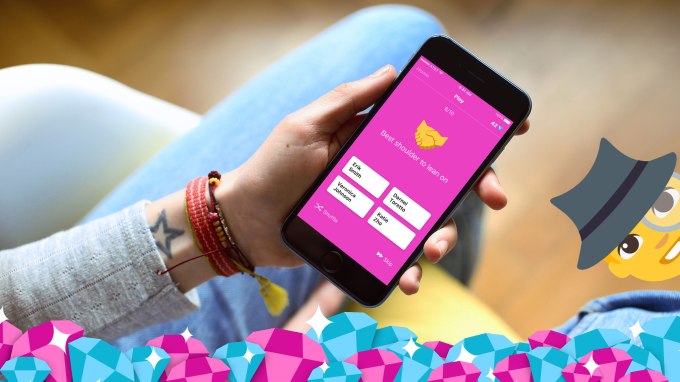 [Correction: tbh has 2.5 million daily active users, not 4 million as we originally published after Bier implied as much in a tweet he deleted after this article was published.]

Bier originally started tbh parent company Midnight Labs back in 2010. The app studio tried a slew of products, including a personal finance app, a college chat app and a personality test. Eventually the company took a small seed round in 2013 from investors, including Greylock via partner Josh Elman, Bee Partners and Indicator Ventures. But nothing took off, and Midnight Labs was running out of money.

With just 60 days of cash left, the company decided to build something at the intersection of the positivity it saw lacking in anonymous apps like Secret and Yik Yak, and the honesty teens craved as seen in the TBH trend where social network users request candid feedback from their friends: tbh was born. “We shipped it to one school in Georgia. Forty percent of the school downloaded it the first day,” said Bier.

📥 Introducing DMs on tbh. Slide on in. pic.twitter.com/ZLBNzbcUW3

The biggest problem quickly became how to keep users engaged with the app; tbh already limits you to answering a few questions at a time, so you beg for more. Its first big feature release came this week with the addition of direct messaging. This lets you message someone who chose you as an answer, and they have the option of revealing their identity to you.

But trying to simultaneously keep the servers online, write new questions and build the next sticky feature was a tall task for such a small team.

Now tbh will have Facebook to help it scale while keeping existing users entertained. The app will remain free to download on iOS and Android, and the brand will remain the same.

Having the backup from Facebook should let Bier and his team breathe a little easier. There’s a lot of advantages to joining forces with Facebook:

But rather than waiting and watching until tbh climbed to be worth nearly $1 billion like Instagram or $19 billion like WhatsApp, Facebook swooped in early. The last thing it needed was tbh ending up being bought by Snapchat. 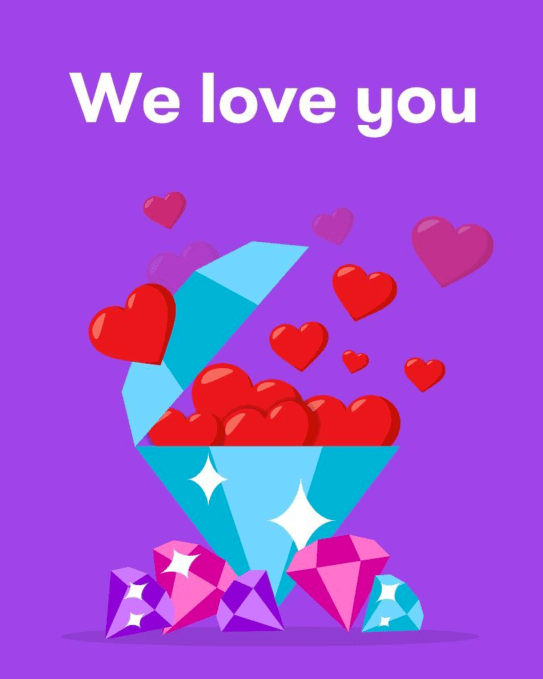 “Nikita and his team have figured out a lot about how teens are using products. This is one of the few that’s gotten this kind of adoption, and that should be celebrated,” tbh investor Josh Elman says. “Hopefully this shows that there’s still room to get lots of people adopting new mobile experiences.”

Before tbh, most social media was about competing for likes or glorifying your offline life. But those little dopamine-inducing notifications had little true connection on the other side, and it’s easy to think you’re uncool when everyone else seems to be having so much fun. Indeed, tbh filled the gap between being “liked” and actually feeling appreciated.

“We think the next milestone is thinking about social platforms in terms of love and positivity,” Bier told me. “We think that’s what’s been missing from social products since the inception of the internet.”

For more on tbh, read our interview with its co-founder about its creation and mission.