Facebook has been quietly testing a new standalone group video chat app, called Bonfire, which allows up to eight friends to engage in conversation as well as use special effects, similar to those you’d find in apps like Instagram and Snapchat.

But upon hands-on testing, TechCrunch has learned Bonfire also lets users join chats straight from Messenger without downloading Bonfire itself. While the Bonfire app is currently only available in Denmark, users with it can invite people from all over the world to join their chats via Messenger.

This strategy could allow Facebook to create a home for Bonfire with dedicated access to launching a multi-screen group video chat, but also let Messenger’s 1.2 billion monthly users instantly join in. That might save it from the lackluster traction that led to the shut downs of other standalone Facebook apps like newsreader Paper, Snapchat alternative Slingshot, news alert app Notify, and video profile app Lifestage. 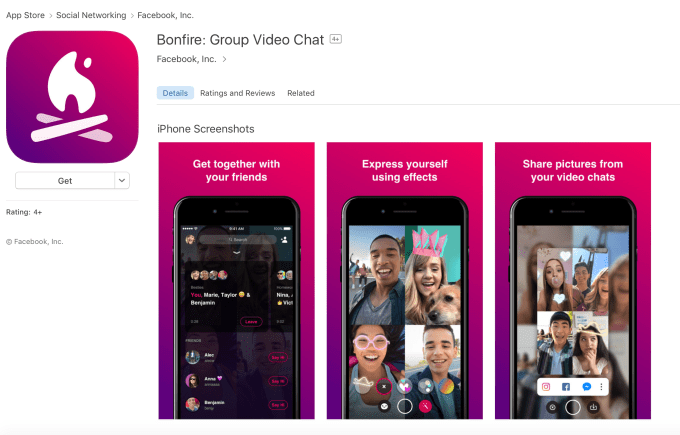 The Next Web’s Matt Navarra first spotted the app in the Denmark App Store. The Verge first reported on Facebook building Bonfire in July. TechCrunch reached out to Facebook for comment on the app and when it might become available in the US. Here’s what a Facebook spokesperson told us:

“At Facebook Inc we continue to build and test new products and services. We already have many great experiences for people to video chat in groups, or as individuals, across the family of apps, including Messenger. We are interested in how everyone uses technology and how we can build great experiences for them. We’re running a very small test in Denmark of an app we call Bonfire. We have nothing further to share at this time.”

By nature of its one-country launch, the indication is that this is clearly a test Facebook is performing, and one that seems to cater to the growing popularity of group video chat. The Bonfire app, which has been downloaded only around 2,000 times, said TNW, was first launched on the Danish App Store in mid-August, then updated this month with the ability to do special effects.

Bonfire is a blatant clone of Houseparty, a teen-focused group video chat from the makers of the Meerkat livestreaming app that received a recent $50 million funding round led by Sequoia.

Recently, Skype updated its app to improve its group chat feature with fun features like emoticons, while a number of newcomers – like iMessage-based Fam – have entered the scene. The app also competes with Houseparty, Airtime, ooVoo, Marco Polo, and many others on group video, and, to some extent, the apps for co-watching videos, like Tumblr’s Cabana or YouTube’s Uptime. 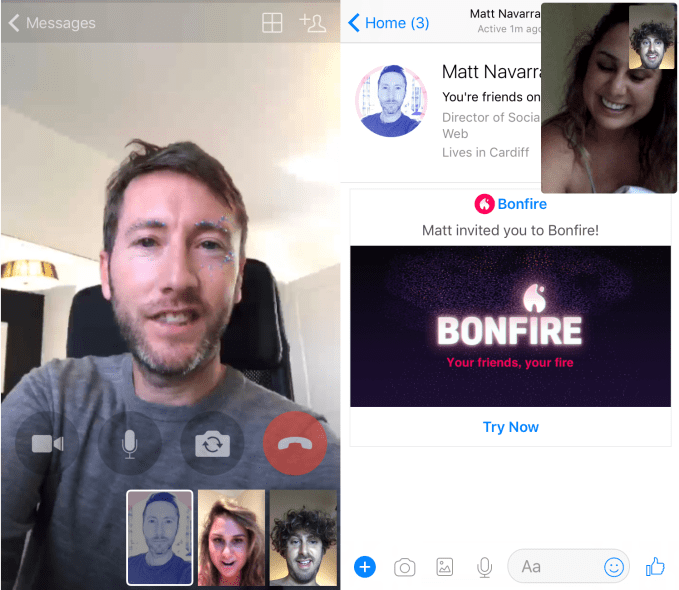 You can join a Bonfire chat straight from Messenger, and keep using Messenger with Bonfire inlaid as picture-in-picture.

Unlike the other apps in this space, Facebook’s Bonfire seems to designed not only as a way to hang out with friends in a private space through face-to-face conversations, but also a way to feed content back to Facebook’s existing social networking apps, including Facebook itself, Instagram and Messenger. You’re able to take screenshots of your video chat and then share them to Facebook, Instagram, Messenger, and elsewhere without leaving the chat.

While chatting on Bonfire, you can switch the screen format from everyone getting equal sized boxes to one where it switches most of the screen to show the person speaking. If you’re in Messenger, you’ll receive a notification if you’re asked to join a Bonfire call, though you can also keep using Messenger with your Bonfire windows inlaid picture-in-picture in the corner.

Messenger already has its own split-screen group video calling feature. But that app is still designed as a utility, with the video feature buried inside. Bonfire brings it to the forefront so you can quickly jump into a chat, but offers the Messenger integration so friends don’t have to go through the chore of downloading a separate app right away.

Facebook has spent the last two years aggressively pushing Facebook Live. But the fact is that not everyone is comfortable performing for an audience. Bonfire lets people “live chill” with friends, offering the urgency and constant engagement of live, but with the low-stress feel of chatting with friends.