While Expedia and Priceline roll out ways to encroach on Airbnb’s space with their own private home listings for travellers, the $31 billion venture-backed Airbnb is also looking at new ways to boost its own traffic and bookings. Airbnb is now rolling out a new call for affiliate partners, where high-traffic sites with over 1 million visitors can embed Airbnb property listings and make commissions when they are booked. Alongside this, Airbnb has now turned on an API for app developers to link in the backend to and offer an easier way to manage listings via other apps.

The two steps underscore how the company is looking for ways to open its platform for the next stage of growth, and come amid a spate of other partnership expansions.

A couple of weeks ago, co-working space WeWork announced it would team up with Airbnb to offer a co-working and accommodation double service to business travellers. And in Florida, Airbnb has been collaborating with a developer to build an Airbnb-branded apartment complex — one way that the company might get around some of the trickier rules regarding Airbnb rentals in private buildings, which are potentially hindering the company’s growth.

Neither the API or the affiliate program have been officially announced, but both were spotted by Matteo Gamba, a product designer who blogs about Airbnb on the side.

Airbnb had an affiliate scheme in place in the past, but it was terminated December 2015. Since then, the company has been partnering with a very limited number of companies on a case-by-case basis (such as a deal to embed listings with two popular travel sites in Japan), which appears to be the basis of the new affiliate program.

“Airbnb has always maintained affiliate relationships with partners around the world,” a spokesperson for the company told TechCrunch in a statement. “In 2015 we ended some inactive partners, but have maintained others. The new landing page serves as simple, single place for potential partners to find the information they need to become an Airbnb affiliate and is available in all countries that Airbnb operates.”

The API — which is available by application only — is also an interesting twist. Up to now, the company has not offered a widely-usable API for third parties to integrate its listings. What you can see if you look around is that developers and others have come up with alternative ways, such as using a man in the middle proxy or scraping the site, to get API-like information. (Using a technique like scraping is a violation of Airbnb’s Terms of Service.)

The API is aimed not at bringing listings posted on Airbnb out of its walled garden to other sites (as the affiliate deals will enable), but about letting developers, specifically of apps that let hosts manage their properties, link up with Airbnb in the backend so that they can manage properties on the site more easily.

“The API allows development teams to securely Oauth into new and existing Airbnb accounts,” Airbnb notes. “Your application users will have the ability to push updates to content, rates, and availability. As Airbnb guests book your listings, we’ll pass back messaging and reservation details, allowing applications to build custom workflows and create amazing experiences for our shared guests.”

Refocusing on building out a network of affiliate partners, and the launch of the API, both show how Airbnb is looking to work much closer with the established travel industry. Affiliate marketing, for example, is one of the biggest ways that sites in the travel sector generate revenue — by aggregating inventory and listings from a host of other sites and then getting a small cut of any sale that is generated through those referrals. It’s also one of the most common ways that people eventually end up booking things.

The affiliate site does not currently list any specific partners, nor does the it give details on the business model behind it, but the idea here appears to be to present Airbnb listings on non-Airbnb sites where where people are already going to purchase travel and related services.

“Earn commissions and provide more choices to your users,” Airbnb writes, with one affiliate option aimed at attracting guests, and other aimed at attracting hosts (in other words, those who would list properties or other services on Airbnb) — the two parts of Airbnb’s two-sided marketplace. 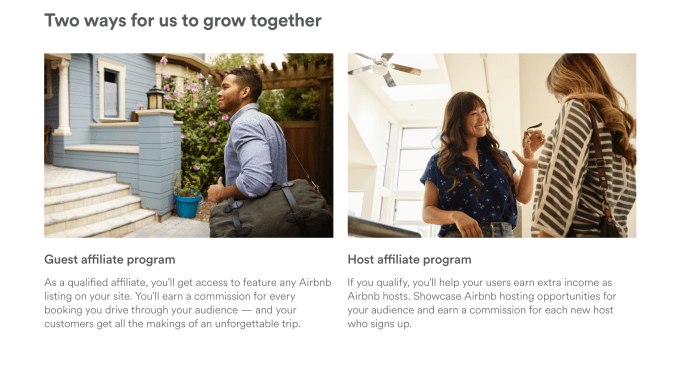 (This would make a lot of sense: Groupon itself has been working on expanding its travel and local experiences business as part of its effort to diversify beyond daily deals from local retailers. Recent moves involve a partnership with Viator to boost its inventory of local activities, and acquiring LivingSocial, which had also reoriented itself to focus on that sector after its own daily deals business took a nosedive.)

To me, taken together and considering the latest partnerships, these moves mark Airbnb’s latest phase of growth. The earliest concept of the site was around people offering spare beds and rooms in their homes as an alternative to staying in more pricey, impersonal or too touristy hotels. Then it progressed to people offering their whole (regular, not vacation) homes when they were not in them.

That quickly moved to vacation properties and places that were not normally occupied by the owner, and then agents appeared to were managing several of properties at once. While Airbnb still very much has a lot of properties and hosts who fall into the first three groups, it needs to turbo charge its growth to really fill out its $31 billion valuation, which in theory puts it between Hilton and Marriott in terms of market cap. And this is one of the ways it hopes to get there: by making it much easier to list and manage properties, bring more eyeballs to its inventory, and quickly convert interested browsers into bookings.