The last time I spoke to Red Hat CEO Jim Whitehurst, in June 2016, he had set a pretty audacious goal for his company to achieve $5 billion in revenue. At the time, that seemed a bit far-fetched. After all, his company had just become the first open-source company to surpass $2 billion in revenue. Getting to five represented a significant challenge because, as he pointed out, the bigger you get, the harder it becomes to keep the growth trajectory going.

But the company has continued to thrive and is on track to pass $3 billion in revenue some time in the next couple of quarters. Red Hat is best known for creating a version of Linux designed specifically for the enterprise, but it has begun adapting to the changing world out there with cloud and containers — and as its RHEL (Red Hat Enterprise Linux) customers start to change the way they work (ever so slowly), they are continuing to use Red Hat for these new technologies. As Whitehurst told me, that’s not a coincidence.

The cloud and containers are built on Linux, and if there is one thing Red Hat knows, it’s Linux. Whitehurst points out the legacy RHEL business is still growing at a healthy 14 percent, but it’s the newer cloud and container business that’s growing like gangbusters at a robust 40 percent, and he says that is really having a positive impact on revenue.

In its most recent earnings report last month, overall revenue was up 21 percent to $723 million for the quarter for a $2.8 billion run rate. Investors certainly seem to like what they are seeing. The share price has gone on a straight upward trajectory, from a low of $68.71 in December 2016 to $121 per share today, as I wrote this article. That’s a nice return any way you slice it. 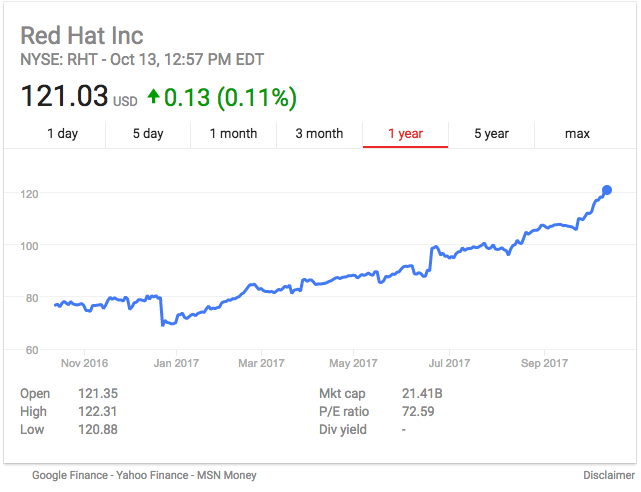 Whitehurst says the different parts of the business are really feeding one another. The company made an early bet on Kubernetes, the open-source container orchestration tool originally developed at Google. That bet has paid off handsomely as companies are moving toward containerized application delivery using Kubernetes. In the same way Red Hat packaged Linux in a way that made sense for enterprise IT, it’s doing the same thing with Kubernetes with its OpenShift products. In fact, Whitehurst jokes OpenShift would be more widely recognized if they had just put Kubernetes in the name.

While he attributes some of the company’s success in this area to being in the right place at the right time with the right technology, he reckons it’s more than that. “We have some skill in identifying architecture that is best for the enterprise,” he said. It doesn’t hurt that they also got involved with contributing back to the community early on and today are the second largest contributor to Kubernetes.

But he says the Linux connection, the fact that containers are built on Linux, is really what is the most likely factor driving the business, and that they can apply what they know in Linux to containers is a big deal.

But he points out that large organizations, which are his company’s bread and butter, aren’t all rushing to containerize their entire application inventory. These companies tend to move more slowly than that, and Red Hat is trying to cover them regardless of where they are in that evolution: using virtual machines in the cloud or on prem or running containerized applications.

Whitehurst understands his company is selling free software, so they have to add value by easing the implementation and management of these tools for customers. “When you sell free software, you have to obsess about the value it can bring because the IP is free,” he said. Given the numbers, it would appear customers see that value, and that is contributing to that steady march toward $5 billion.