Last year Red Hat, which has been mostly known for selling Linux in the enterprise became the first $2 billion open source company. Now it wants to be the first to $5 billion, but it might not be just Linux that gets it there.

A couple of years ago Red Hat CEO Jim Whitehurst recognized, even in the face of rising revenue, that the company couldn’t continue growing forever featuring Red Hat Enterprise Linux (RHEL) alone. As successful as RHEL had been, the world was changing and his company like so many enterprise-focused companies had to change too or risk being left behind.

To quote that old Microsoft commercial that meant, “To the cloud!”

When Whitehurst announced his company’s commitment to become a cloud company built around OpenStack in 2014, he probably surprised a few people including some long-time employees, but he says making the move wasn’t as big a stretch as it would appear.

It’s all About Linux and open source

That’s because at its core the cloud is built on Linux and open source components, says Paul Cormier, president of products and technologies at Red Hat, and if there is one thing that Red Hat knows well, it’s those two subjects.

“This is a really great thing for us in that most of the innovation happening around the cloud is happening in Open Source — whether Linux, Kubernetes, Docker or OpenStack. We are uniquely capable just from what we’ve done for over a decade at taking open source software and making it supportable, consumable, and life-cycle managed for enterprises,” says CEO Whitehurst.

Our planning assumption is that with our existing portfolio we feel comfortable we can get to $5 billion. Jim Whitehurst, Red Hat CEO

That doesn’t mean the transition has been simple, however. It represents a different kind of sale and that has required some rethinking on the part of the entire company from R&D to sales and marketing. Whereas previously, it was about a selling a value proposition around lower cost and freedom of choice, the cloud is a bit more complicated because the exact reason for making a purchase isn’t quite as clear in this scenario.

“It’s not replacing something you had before. It’s creating a platform to develop new things, so the value proposition is more around understanding business value,” Whitehurst explained. That creates a whole set of go-to market challenges.

“It stretches the company, makes us get closer to the customer to better understand their needs, understanding how they create value and how we can help them do that.”

So what’s the problem? 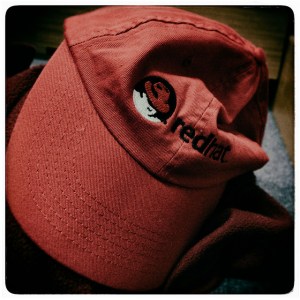 Photo by Paul Hudson on Flickr. Used under CC by 2.0 license.

That presents some difficulties for Red Hat says Dave Bartoletti, a Forrester analyst who keeps tabs on the enterprise.

“Rather than being a cheaper alternative to something expensive and proprietary, it’s now a set of tools anyone can use almost anywhere to create software faster,” he said.

Not only that, in some instances it puts Red Hat in direct competition with the public cloud vendors, says Al Gillen, an IDC analyst.

“What is less under Red Hat’s control is the shift toward public cloud infrastructure, which relies heavily on non-branded products for the core infrastructure layers (read that as operating system). That transition serves as a head wind for Red Hat’s growth, because it will have to overcome lower-cost generic infrastructure solutions,” Gillen explained.

He thinks Red Hat will be fine for now with its core business as companies continue to build traditional distributed applications, but if the idea is to move customers to the cloud to build the next generation of applications, Red Hat will have its work cut out for it competing against these lower-cost competitors.

All that said, Whitehurst and Cormier remain supremely confident in their ability to steer the company through this change and be even more successful than they were as a pure RHEL company. In fact, Whitehurst says the goal is to get to $5 billion in five years.

“Our planning assumption is that with our existing portfolio we feel comfortable we can get to $5 billion,” he said.

He says you can’t look at the businesses — cloud and RHEL — as silos because in many ways they feed off each other, and there is also a middleware layer, which acts as another revenue source.

Whitehurst points out that only a handful of enterprise software companies have achieved $5 billion in revenue. These include Microsoft, Oracle, SAP, Salesforce and VMware. You could also throw in Cisco based on just software revenue and Adobe (which is on pace to pass $5B this year).

He admits that would take a hefty growth rate to achieve that goal (approximately 58 percent per year if my math buddy’s calculations are correct), not impossible given the mix of products the company brings to the table, but certainly ambitious.

Regardless, Whitehurst says he laid out that goal at their partner conference and he believes his company is well positioned to achieve it. Time will tell if he’s right.