No one’s posting to Facebook Stories. Only eight of my 2,800 friends have Stories up right now, and three came from the new “cross-post from Instagram Stories” feature. Maybe younger or international demographics are, but I’d bet they’re too wrapped up in Snapchat and Instagram. It’s slow adoption for a feature cloned from Snapchat that’s proven wildly popular elsewhere, and lives prominently at the top of perhaps the world’s most-used app.

Today, after weeks of pestering the company about the possibility, Facebook exclusively told TechCrunch that Facebook Stories is opening up to Pages. The feature is rolling out over the coming month to all pages, including brands, news publishers, athletes, entertainers and nonprofits.

Facebook product manager Amy Sun tells TechCrunch “We’ve been listening to our community and working to make it fast, fun and easy for people and Pages to create Stories on Facebook. Over the coming month, Pages will be able to create Stories to share with the people who follow them.”

Facebook said it was encouraged by how Instagram users have embraced Stories from public figures and brands like fashion companies. It expects to see lots of “behind-the-scenes” looks inside companies and the polished marketing campaigns that end up in the traditional Facebook feed.

People will see Facebook Stories from Pages they follow or Like in the Stories section on mobile and desktop. Page admins will see a “Create Story” button on the mobile app when viewing their Pages. This content won’t show up on the News Feed unless posted there as well, and will disappear in 24 hours like all Stories.

News publishers and entertainment personalities might have the most to gain from the feature, as it will let them quickly shoot intimate content that differs from the traditional text-based articles and glossy videos generated by or about them. Stories viewers are used to off-the-cuff tone, shaky production and selfie monologues, allowing these creators to speak to directly to their audiences without much fuss. 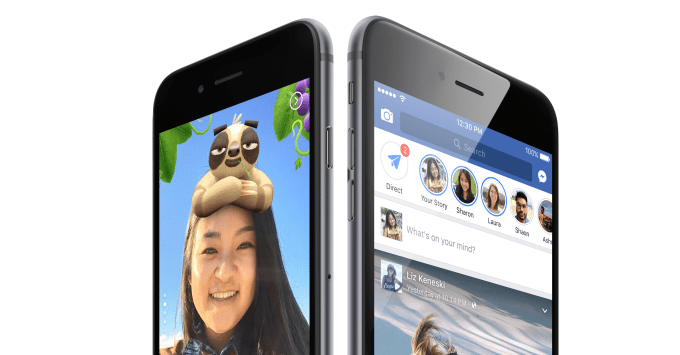 Facebook Stories could desperately use the boost. It’s the home for content created through Facebook’s augmented reality Camera Effects platform. But the aspirations of embedding content, art, games and utility into the real world via Facebook Camera will only come to fruition if people use Stories.

Facebook has yet to share a daily user metric for Facebook Stories, despite Instagram Stories hitting 100 million merely two months after launching, while it and WhatsApp Status both now have over 250 million. That’s compared to Snapchat’s 173 million daily users for its entire app.

In my experience, I received about 30 views sharing Facebook Stories to my 2,800 Facebook friends  (1.07 percent viewed) and 830 views when also sharing to my 69,000 Facebook followers (1.15 percent viewed). Facebook needs either better content or to institutionalize the viewing experience to get Stories enough viewers for the Camera Effects platform to reach its full potential.

That’s a bit of a chicken and egg problem, as no one wants to take the time to post if no one’s watching. Businesses will either give the feature a jumpstart or make it nothing but another way to blast marketing spam that people ache to avoid.

Unfortunately, without proper education about what’s actually entertaining to users, I fear it will be the latter. If Facebook at first only allowed specific top brands with a history of great content like Red Bull, or ones especially apt for Stories like big sports leagues, newsrooms and television shows, it might be able to set the tone of what branded Stories should look like on its platform. But simply launching this to all brands may breed myopic, sales-driven usage that could further push users away.