Snap’s Q2 earnings report was another failure on a long, downward path for the social media company as user growth slowed under the pressure of Instagram. Snap added 7.3 million daily active users to reach 173 million with a 4.2 percent growth rate, slower than the 5 percent growth that got it to 166 million DAU in Q1. Snap missed on revenue that reached $181.6 million with a loss of -$0.16 earnings per share. That’s compared to Wall Street’s estimates of $185.8 million in revenue and a loss of -$0.14 EPS plus 175 million users.

Snap lost $443 million this quarter, up nearly 4X from $116 million in Q2 2016, showing its marketing and sales expenses are ballooning despite it still missing on earnings.

Investors we spoke to wanted to see daily active user count grow 5 million, to at least 171 million, and average revenue per user above $1.05 or $1.10. Average revenue per user was actually $1.05, up a strong 16 percent from Q1. Total revenue grew 153 percent year-over-year, up 21 percent from $149.6 million in Q1 revenue. But with slowing user growth, that wasn’t enough to satisfy investors.

Snap had closed at $13.69 today just before earnings, and immediately fell more than 16 percent on the bad news, to hover just above $11.50. 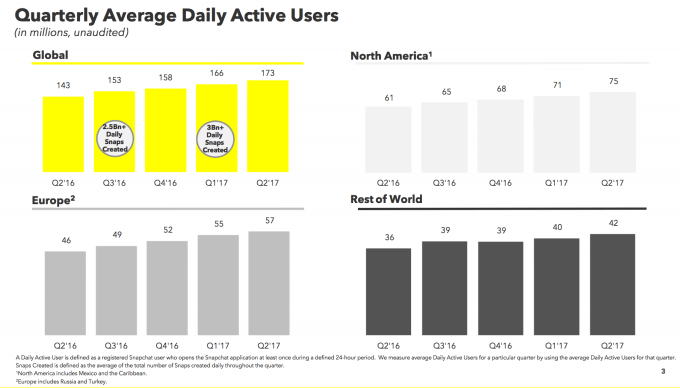 One bright spot in the earnings was that Snapchat added 4 million users in the lucrative North America region compared to 3 million the last two quarters. Another was that Snap boosted its ARPU significantly in the Rest of World, from $0.19 in Q1 to $0.29 in Q2, demonstrating that it’s learning to monetize lower-bandwidth users.

Investors hoped that Snap’s shrinking user growth rate was just a phase, and that it would bounce back from competition. It saw 17.2 percent growth in daily users in Q2 2016, but that fell dramatically after Instagram launched its clone of Stories, falling to a low of 3.2 percent in Q4 2016. Yet Snap couldn’t build on last quarter’s 5 percent growth, and the slippage has dragged down its share price.

During the Q2 earnings call, Snap breezed past the obvious shortcomings in its earnings report to discuss some vanity metrics, hardware sales and its advertising plan:

Snap has had a tough quarter since it fell way short on its Q1 earnings report, and its share price fell from nearly $23 to around $18. That’s after pricing its May IPO at $17 and seeing a big first day pop. Further competition has depressed the share price, as Instagram Stories and WhatsApp Status now each have 250 million users, making the clones much bigger than Snapchat as a whole. Snap only caught a break last week when rumors that Google was interested in acquiring it briefly perked up the share price.

Snap has been aggressively courting advertisers in hopes of getting its revenue growing faster, adding self-serve and bulk ad buying tools and striking ad measurement partnerships. It scored a viral hit with its dancing hot dog augmented reality feature, but that fad has come and gone.

Snap has plenty to fix if it’s going to claw its way back to its $22 billion private funding valuation or its $31.4 billion post-IPO pop price. An algorithmically sorted feed, better relations with brands and influencers and a clear strategy for fending off Facebook could all help secure Snapchat’s future. But that could require diverting from some of the product philosophies that got it this far.

For more on what Snap should do next, read our list: 8 ways to fix Snapchat