As the startup tech scene blossoms in Australia, despite challenges like a small pool of local institutional investors and natural threats like the predatory Dropbear, one of the key components of its success has been the development of its national incubator and accelerator programs.

One of the best of the bunch is Startmate, which is announcing their eighth cohort on Monday.

Founded in 2011, Startmate has provided financing and mentorship for 64 companies since its launch, which have collectively raised over $100 million. That’s quite a hit rate for a six-year-old incubator operating in one of the farthest flung corners of the world.

More than just a startup accelerator, six years ago, Startmate was also part of the starting gun of a renaissance in Australian and New Zealand tech startups making their mark on the wider tech world.

Startmate itself was created with the premise that Australia needed a mentor-driven seed-stage fund similar to Y Combinator in the U.S.

To make that vision a reality, he recruited some of Australia’s top entrepreneurs to come in as co-investors and Startmate was born.

Some of the companies that have emerged from the accelerator program include startups like Bugcrowd, Happy Inspector, Drawboard, Propeller, UpGuard, Workyard and Verro.

Recent successes for the incubator include a $16 million Series A investment for the drone delivery startup Flirtey; a $3.1 million round for the drone three dimensional mapping software developer, Propeller Aero; and Bugcrowd, which raised $15 million for its bug bounty security services.

Startmate raises its capital, roughly $2 million to date, from its mentors so that each advisor has an incentive to help all of the companies in its portfolio succeed.

This cohort marks the first foray of the Sydney-based accelerator program into Melbourne, through a grant from LaunchVic.

Companies that are accepted into the Startmate program are given $75,000 in exchange for 7.5% equity on the terms of a SAFE note. If a company has raised more than $250,000, it receives the $75,000 on the same terms as their last round of funding.

The accelerator has, unsurprisingly, become a feeder for deals coming to Blackbird Ventures, but the companies that have come out of the program have also managed to collect cash from Accel, Costanoa, Microsoft co-founder Paul Allen, Australia’s other marquee investment firms Square Peg Ventures and Airtree Ventures, Menlo Ventures, Qualcomm Ventures, Salesforce Ventures, and individual investments from Peter Thiel.

Here’s the most recent cohort. 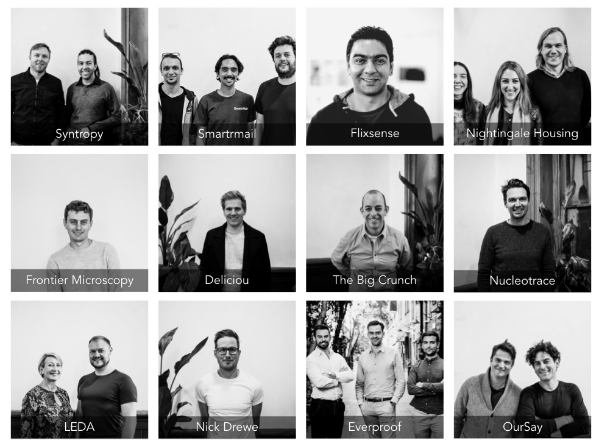