I don’t know if you’re into baroque music, but I can tell you that Germans sure are. So it’s no surprise that German R&D outfit Fraunhofer has turned its considerable resources towards learning about and conserving every little detail of the instruments for which the likes of Bach and Handel composed their music. Specifically, they’re putting them into an enormous x-ray machine.

There are thousands of such instruments, from woodwinds to pianos, but many of them are too valuable to take apart, or too fragile to display.

For a country whose history is so rich in music, it is a shame that the artifacts of such a critical period like the baroque should be locked away. It’s the same way with other museums, which only have so much space to show their collections — so why not digitize them and show them off that way? 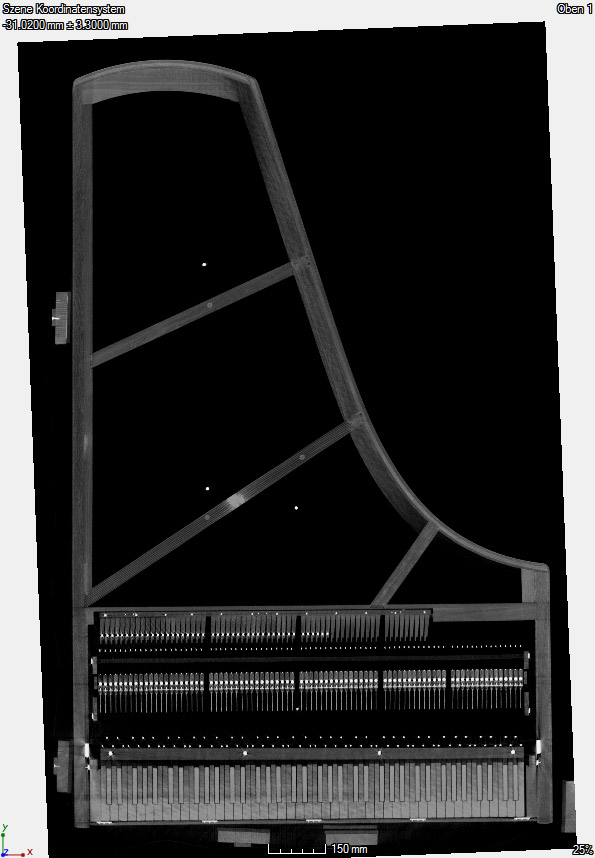 Running for two years now, the project has scanned more than a hundred instruments at Fraunhofer’s Development Center for X-ray Technology, or EZRT. They’ve already scanned all kinds of interesting things in the past in their large-format devices, but this instrument project is especially culturally relevant.

The XXL X-ray environment (that’s what they call it) “consists of two eight-meter-tall steel scaffolding towers and a turntable with a diameter of three meters, housed in a hall covering a surface area of 400 square meters and rising to a height of 14 meters.” That’s XXL, all right.

That amount of space lets them safely scan a grand piano, as you see at right. (The top image, in case you were wondering, is a box-valve trumpet.)

It’s not just about making an inventory of the things, though. The researchers are learning as they go. What settings work best for what materials? What resolution is sufficient for replication? What formats should the resulting models and imagery be disseminated as? How long does it take? (Answer to that last one: quite long. A violin at 50 microns resolution takes 20 hours.)

“Ideally, we would like to be able to digitalize the museum’s entire collection of historical musical instruments and place the 3D images online. Our examination standard defines the best way to go about this task,” explained Fraunhofer’s Theobald Fuchs, who leads the project, in a news release (digitalize is his word). “The CT digitalization project will enable us to create a virtual museum in which digital facsimiles of these instruments are available to anyone with internet access.”

The team plans to release at least part of their research by the beginning of next year, at which point the recommendations and parameters they set forth may possibly be taken up by any other interested party with a two-story X-ray machine.