After abandoning its plans to launch a subscription video-on-demand business earlier this year, IAC-owned streaming video site Vimeo announced today that it’s acquiring the live video streaming platform, Livestream, and launching its own live streaming product, Vimeo Live. The move to integrate Livestream’s technology into Vimeo will allow video creators to capture, edit, stream and archive their live events, the company says, in addition to hosting, distributing, and generating revenue from their videos.

Terms of the acquisition were not disclosed, but the deal is expected to close early in the fourth quarter. Vimeo tells TechCrunch that it’s also the largest acquisition in its history,

The deal makes more sense for Vimeo than its scrapped move into subscription video-on-demand ever did, especially since it would have had to compete with leaders in the space like Netflix, Amazon and Hulu who are spending billions on content.

Instead, Vimeo’s core business is focused around selling tools and services to professional and semi-professional video creators, as upgrades to its basic and free plan. This includes Vimeo’s VHX unit, an acquisition from last year, which helps companies launch their own video streaming services to sell their films, shows and web series across platforms. The service, according to its website, is used by Foo Fighters, NPR’s “This American Life,” Comedy Central, Drafthouse Films, and several others.

With the addition of Livestream’s technology, Vimeo creators can now branch into hosting live events, as well.

Livestream today powers over 10 million events per year for over 10,000 paying subscribers like Dow Jones, Philadelphia Eagles, Tough Mudder, and Spotify. Nearly 50 million viewers tune into watch the hundreds of thousands of live events powered by Livestream every month, the company also noted. 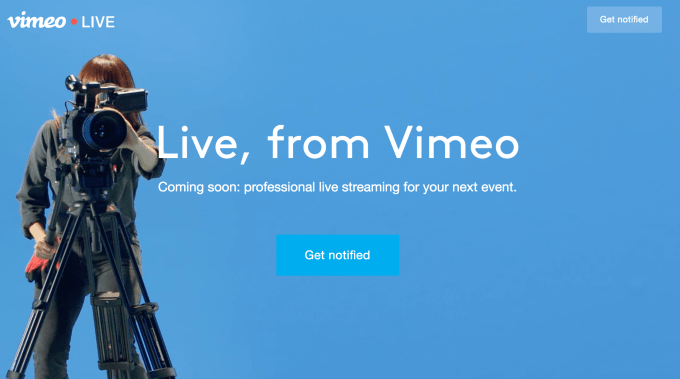 According to new Vimeo CEO Anjali Sud, who was recently promoted from her position running the company’s creator business, live video is something Vimeo creators have been asking for.

“Ultimately, Vimeo is a creator-first platform and live video is what our creators are asking for – this was the #1 request from our community, and it is critically important for us to deliver on what our community needs, while also ensuring that what we produce is founded in quality and reliability, which is why we’re so proud of Vimeo Live and this acquisition,” Sud said.

“Finally, live video contributes to our goal of offering an end-to-end solution across a creator’s entire video workflow, from broadcasting live events to archiving and hosting videos, to distributing and monetizing them anywhere,” she added.

The company plans to fully integrate Livestream into the Vimeo platform after the acquisition completes.

This means Livestream’s current customers can continue to use its tools, like its live event camera the Mevo and live production switcher Studio, but will in the future will be able to stream live events directly through Vimeo. By doing so, they’ll gain access to Vimeo’s own tools, like its customizable, embeddable player, or its syndication tools for distributing the stream across Facebook, YouTube, Twitch and Twitter, for example.

They’ll also be able to do things like see who’s attending an event (via email capture in the player), enable live chat, plus view live and archived stats to track the stream’s performance.

And when the event wraps, they can then use Vimeo to sell the video as a rental, purchase, or subscription. Vimeo will also later integrate with its over-the-top technology, allowing for live content to be distributed to branded apps across iOS, Android, Roku, Samsung and more.

Livestream, which is based in Brooklyn, also has offices in the Ukraine and Bangalore, India.

As part of the deal, Livestream co-founder and CEO Mark Kornfilt will report to Vimeo CEO Anjali Sud as General Manager of Live. His focus will be on growing Vimeo’s combined live offering and integrating Livestream’s capabilities into Vimeo.

Livestream’s 180 employees worldwide will offered jobs at Vimeo, where they will work on Vimeo’s products and platform, including the integrations that will allow streaming from Livestream’s video products to Vimeo Live.

“A big reason for doing this acquisition was the opportunity to bring Livestream’s expertise and institutional knowledge in live video to Vimeo” Sud explained. “This combination is not about cost cutting, it is about growth and attacking a massive opportunity in the market together.”