Pinterest today announced a partnership with Target to integrate its visual search technology known as Lens into Target’s apps, and later its desktop website. The deal, which represents the first time the company has integrated Lens into a retailer’s app, will allow Target shoppers to snap a photo of any product, and then find similar items available for sale at Target.

The company says that this feature will initially become available within Target’s registry, but will expand more fully to Target’s app and desktop website in the future.

As a result of this deal, Target is also increasing their ad buy significantly with Pinterest, in a related effort to drive more consumers shopping online to Target’s site.

Pinterest, which is now used by 200 million people worldwide, has heavily invested in its visual search technology in order to turn the smartphone camera into a search engine for products.

The idea is that, when a consumer sees something they like out in the real world, they can simply take a picture with Pinterest’s app then find out additional information, like where to buy the item, how much it costs, or other ideas – like how to style an article of clothing, for example.

The technology is meant to catch users at the moment of discovery, then push them into the buying cycle via Pinterest, instead of say, Google. (Google responded by rolling out its own visual search tools for top Pinterest categories, like recipes, fashion and more.) 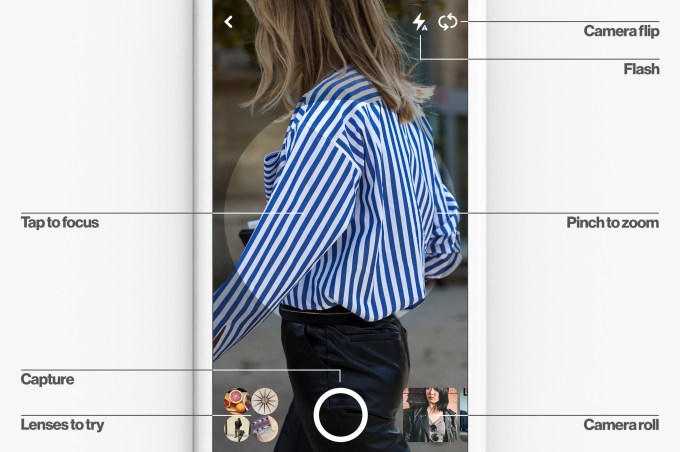 Pinterest’s last round of funding – $150 million at a $12.3 billion valuation – was also devoted in part to investing further in the development of the visual search technology. Shortly after announcing its raise, the company rolled out a newly redesigned Lens with added abilities to do things like zoom in and tap to focus, as well as search from photos that had already been taken and saved to the Camera Roll.

In Target’s case, Lens will help connect online and mobile shoppers to Target products, even if the photo they snapped is not something found at Target itself.

As Target explains, the way this will work in its app is that the camera can be substituted for a keyword search.

In other words, instead of typing in “modern crib” you could take a picture of one you like, and then receive a set of curated results that resemble or complement your photo. The retailer notes that it wanted to invest in visual search because the technology is now going mainstream. Image search combined with voice search may make up 50 percent of all searches by 2020, it noted.

“We’ve partnered with Pinterest for years—it’s a natural fit, thanks to our shared passion for creating inspiration and a sense of discovery,” says Kristi Argyilan, senior vice president, media and guest engagement at Target, in a statement. “Now, Target’s excited to take our partnership to the next level. We’ll be the first—and exclusive—U.S. retailer to bring Pinterest Lens directly into our apps and experiences, creating an incredibly rich and much easier way for our guests to explore, discover and buy millions of products at Target,” she added.

The companies declined to detail the nature of Target’s ad buy that accompanies this deal, but Pinterest would say that it’s “multi-year” and the company’s “largest ever.” The deal is a Promoted Pins ad buy, which means customers will see more of Target’s pins when they perform searches on Pinterest or browse their home feed.

However, this is not the first time that Pinterest has licensed out its Lens technology – only the first time in a retail environment. The company previously allowed Samsung to integrate its visual discovery technology into the Galaxy S8 and Bixby Vision, allowing S8 owners to get product suggestions via the native camera app, search for images on the web in Samsung’s browser, and search existing photos in their photo gallery.