Reelgood, a service aimed at helping cord cutters find new shows and movies to watch from across streaming services, is now available on mobile devices. The company this week launched on iOS – its first mobile application – which allows you to search and browse content from over 250 streaming services, including those that are available to stream for free with ads.

After abandoning pay TV, it can be challenging to find something else to watch once your current binge session is complete. Today, many people ask for word-of-mouth recommendations from friends, instead of only relying on the suggestions found in individual apps like Netflix or Hulu. And when you subscribe to multiple services, knowing where a show or movie is now streaming is often a matter of opening several apps and then poking around.

Reelgood aims to simplify this process, while also highlighting information that can help you make a decision, like IMDB ratings, trailers, and summaries, for example.

The app includes a show-tracking feature as well – something that I personally have been using TV Time for in the past, because I tend to drop off on some shows for a while as I pick up another, then can’t remember where I had left off when I decide to return.

On this front, I still prefer TV Time’s tracking functionality, as it presents the shows in a more compact list so you can quickly check off more episodes as “watched” at once before having to scroll down, but that’s something of a nitpick, I’ll admit.

However, Reelgood does well at organizing the available streaming content out there, making it easier to discover something new (or just new to you).

For example, in the app’s “Discover” section – which is separated into two tabs for TV shows and movies – it groups its suggestions into categories like “Popular,” “Trending,” “New TV” or “New Movies,” and more, as well as those that list the original programming from the streaming services themselves.

You can also hop into various genres like “Action & Adventure,” “Comedy,” “Crime,” “Drama,” “Fantasy,” and many others, in order to find something that matches your interests. 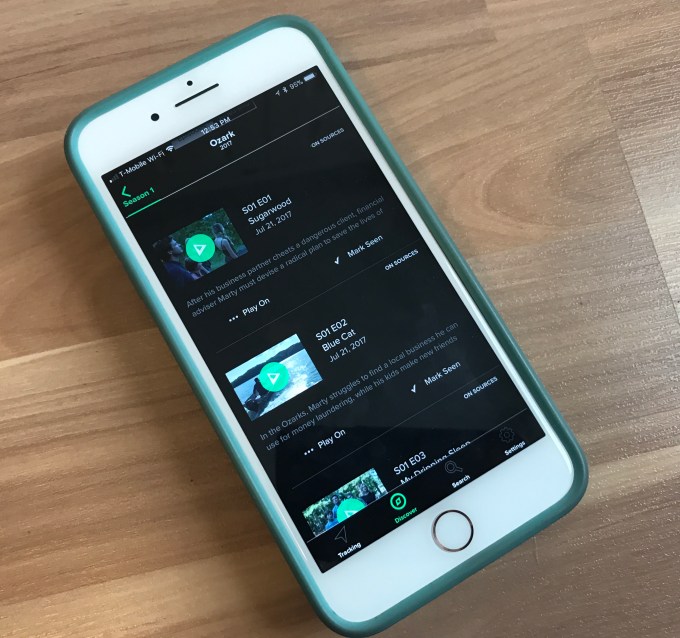 When you find something you like, you can mark it as “Seen It” or “To See,” read the summary, view the trailer, and find out where you can watch it, including via free streaming, subscription, or via rental or purchase services.

The app itself is personalized to you, as it prompts you to pick which services you want to track upon first launch. And if you have an aversion to commercials interrupting your content, you can opt to not include free, ad-supported services with a single click.

However, it would be to your disadvantage to limit the visibility of free streaming sources in Reelgood because a lot of its content is aggregated from the over 90 sources it tracks that offer free, ad-supported streams.

When you’re ready to watch something, you can tap a button to select which streaming service you want to use. This then launches the related app – like Netflix – right on your device, with the show or film cued up.

I have some design quibbles with Reelgood, though – like the fact that episode summaries are cut off when you’re viewing a list after performing a search; or how that “On Sources” flag next to them seems to indicate if it’s available on your sources (?), but could be mistaken for a button you’re supposed to click; or the way the checkmark and plus icons are overlaid on show and movie image thumbnails, sometimes obscuring the titles.

I’d also argue that Reelgood could benefit from a social component – a way to chat about favorites, create or share your own collections, or even follow friends, for example.

In other words, the app needs polish, but as a 1.0 release it’s still fairly handy.

The company declined to say how many people are now using its service since its launch in November, but did note that users have played over 5.2 million episodes via Reelgood to date.