Pinterest is rolling out a new feature inspired by its power users, said Pinterest CEO and co-founder Ben Silbermann, speaking today at TechCrunch Disrupt San Francisco. The new addition, called Sections, allows Pinterest users to divide their board into various sub-groups related to the board’s main topic. For example, if you’re redesigning your home, you might create sections for sofas, rugs, lamps, paint colors, etc.

Sections was recently launched into beta testing, but hasn’t made its way to all of Pinterest’s users at this time. And it may change a bit between now and its public debut as the company responds to the feedback from its early adopters.

“It’s been a really popular feature request for years,” said Silbermann, when we chatted with him backstage at Disrupt about why Pinterest created this new option. “A lot of people create a board, and then after they create it, they want to add structure to it,” he explains. 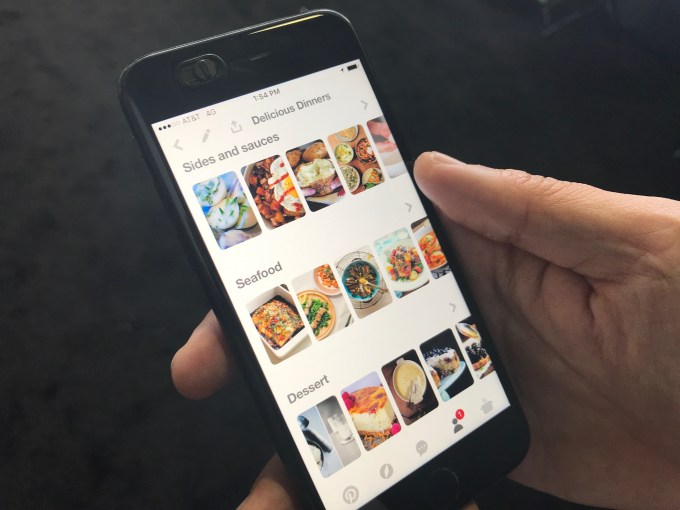 On Silbermann’s own Pinterest account, he says he’s using Sections for his recipe collection, where he’s divided his board into different categories of recipes like salads, pastas, soups, etc.

These Sections can be set to public or private, just like Pinterest’s boards feature.

Pinterest recently mentioned the feature – then just described as “boards within boards” –  alongside news of its 200 million user milestone, but only a small number of power users have been invited to test Pinterest Sections at this time.

The feature isn’t yet something Pinterest is planning to monetize directly, though.

“We really just built it because we think it would make the product more useful,” says Silbermann. “We think people are going to enjoy it, and when they do, hopefully they’ll use Pinterest more in their everyday life.”

In other words, Sections is designed more so to keep people on Pinterest’s site, engaging for longer periods of time with its product. That, in turn, could help Pinterest – in the longer term – do things like increase its user base, extend users’ session lengths, and other metrics that advertisers would care about.

Sections is in private beta for the time being with more users being added on a gradual basis, we understand. There’s no way to request an invite or opt in to beta test for now.

However, the public launch is not too far out – a matter of “weeks” not “months,” we’re told.

CEO Ben Silbermann on how Pinterest is building for its core audience #TCDisrupt pic.twitter.com/uBB9tqfjnI