Robots are going to have to work together if they want to destroy us, their soft, fallible masters. But the current paradigm of having a Skynet-like (or rather, Zerglike) overmind control a set of semi-autonomous drones is too easy to beat — take out the brain and the rest fail, right? Not if they’re all the brain, which is the idea demonstrated in a wonderful new paper, “Mergeable nervous systems for robots.”

The admiration of the authors for our shining, pitiless destroyers is evident from the get-go. The very first sentence of their paper, published today in Nature Communications, reads:

Robots have the potential to display a higher degree of lifetime morphological adaptation than natural organisms.

Not if we don’t let them! But I digress. The researchers, a multinational team from Lausanne, Lisbon and Brussels (led by Marco Dorigo of the latter), point out that this amazing potential is, at present, unattained. Why? Because the swarmbots we’ve seen tend to outsource their intelligence to a higher power like a computer watching them from above. They’re more like remote limbs than independent bots.

To fix that, to me reassuring, weakness, the team decided to imbue each robot with the ability to control both itself and its brethren. These MNS robots all have their own CPUs, sensors, wheels and so on, and can operate independently. But when one connects to another, it subjects its will to the “brain” robot and becomes as a mere appendage to it. 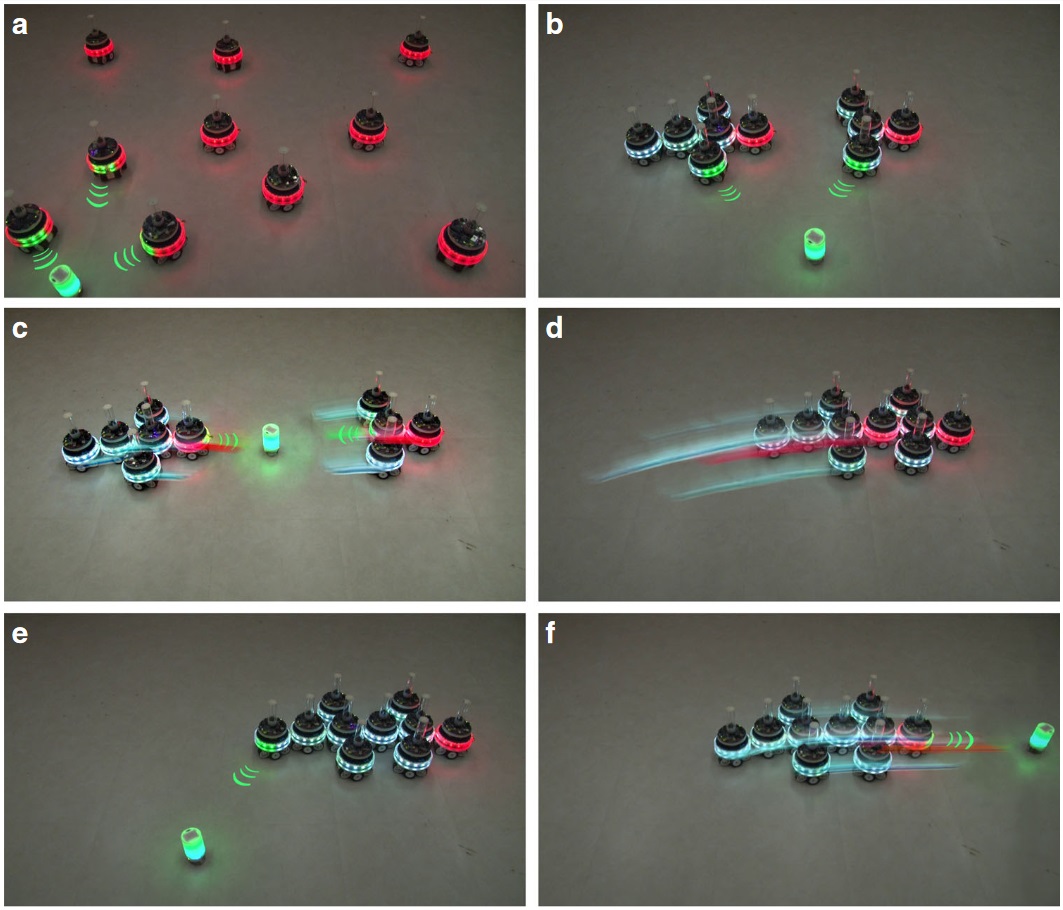 Bots operating independently avoid a green stimulus, then operate as single units once connected to do the same thing. Instructions always originate in the red-lit “brain” modules.

This has lots of advantages. First, there’s no need for an overarching intelligence that monitors and directs the robots, and all the infrastructure that implies. Second, it vastly simplifies the logic necessary to accomplish tasks: the “brain” issues commands and the “limb” robots execute them. Third, it makes replacing parts easy: if part of an arm isn’t working, swap it out; if the brain is destroyed, switch to the next one down the line. Fourth, it makes scaling the robots from five- or six-bot formations to hundred-bot formations… well, if not easy, then easier than before. And finally, adding functions like lifting or pushing is as easy as adding a lifter or pusher unit to the “organism.”

Or, if you wanted to sound like an evil genius planning to take over the world with these things:

Our control paradigm enables robots to exhibit properties that go beyond those of any existing machine or of any biological organism.

That’s how the paper describes it. We get it, robots are superior! 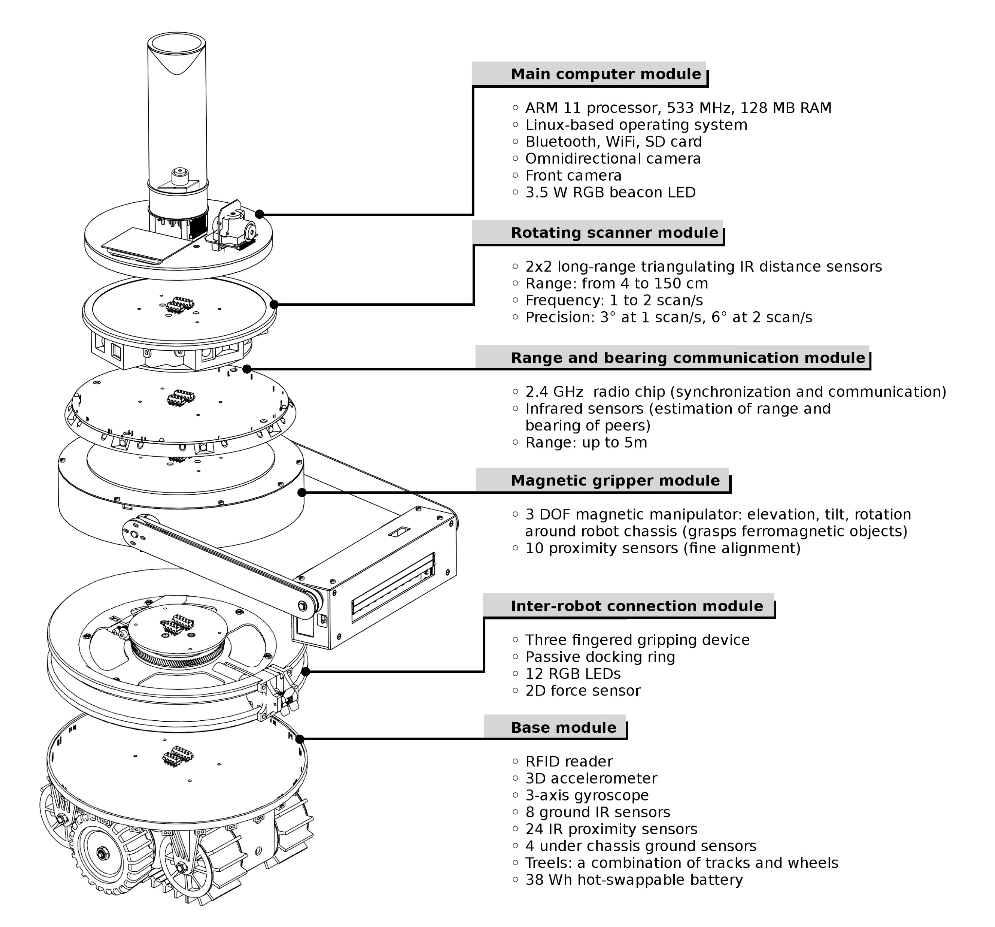 Each MNS robot is like a little custom layer cake: wheels and “treels” (track-like wheels) on the bottom; then a ring with a little gripper that can rotate around and expand to hold onto another robot’s ring; then an optional utility module like a magnet for picking up nearby objects; then the computer and sensor package, which has the Wi-Fi, 360-degree camera, range sensor and identification beacon. You can see the rest of the parts in the diagram at right.

Obviously these little basketball-sized things aren’t going to do any serious work. They don’t even have arms, or guns, or vicious blades. But the robots in the experiment are just to demonstrate the logic and benefits of such a setup.

Imagine a real-world application with a dozen or two of these things rolling around a construction site. They could operate on their own to pick up supplies and trash, recharge and do simple deliveries, but join together when they need to do something unusual like pick up something heavy, climb a wall or monitor the site at night.

Our vision is that, in the future, robots will no longer be designed and built for a particular task. Instead, we will design composable robotic units that give robots the flexibility to autonomously adapt their capabilities, shape and size to changing task requirements.

Clearly, it’s the future we deserve.