Ten years ago, the world got much bigger and much smaller, all in one fell swoop.

Steve Jobs introduced the iPhone, the first internet-connected smartphone that put user experience above all, finally executing on the idea of a full touchscreen handset. This ushered in the rise of constant social networking, an application economy and complete dependence on our smartphones for just about everything.

Today, Apple has introduced the iPhone 8 and iPhone 8 Plus. But in true Apple fashion, Tim Cook promised us “one more thing.”

Today, 10 years later, Apple is introducing the iPhone X. And, by the way, it’s pronounced “Ten.”

So what does a decade of iPhone innovation look like?

Apple’s iPhone X, like the new iPhone 8 and iPhone 8 Plus, comes with a brand new design, ditching bezels and opting for a glass front and back. Apple says there is a deeper strengthening layer in the glass that makes it the “most durable in a smartphone.”

Thanks to this new design, the iPhone X is sealed for water and dust resistance.

It’s made from surgical-grade, stainless steel and comes in two finishes: space gray and silver. 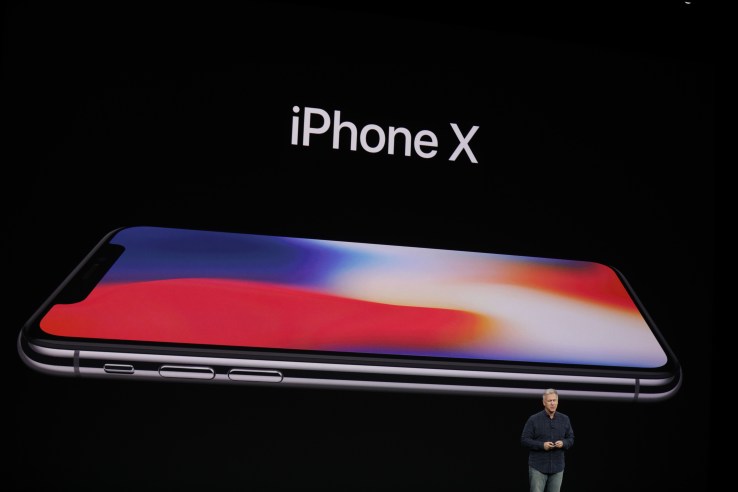 Following the current trend in smartphones, Apple has done away with the bezels on the iPhone X, offering an edge-to-edge 5.8-inch display. In fact, Apple is upgrading quite a bit in that department, offering an OLED display for the very first time, calling it the Super Retina Display. This brings with it all the standard benefits of OLED, including more accurate colors, better image uniformity across the screen, etc.

The iPhone X Super Retina display supports 2046×1125 resolution, with 455 PPI, and HDR in both Dolby Vision and HDR.

The company is reportedly paying around $125 per panel, which is part of the reason for the reports of a more expensive iPhone.

This is also the first iPhone that will not have a home button, with the new screen reaching across the entire front of the device. Users can wake up their device by picking it up or swiping across any part of the screen. To close an app, simply swipe up on the screen and throw it away. Users can also reach Siri by simply saying “Hey Siri” or by pressing the side button.

Given that the home button has historically been central to the iPhone’s security, the replacement comes in the form of a depth-sensing front camera that will unlock the phone by detecting the user’s face. Apple is calling it FaceID. 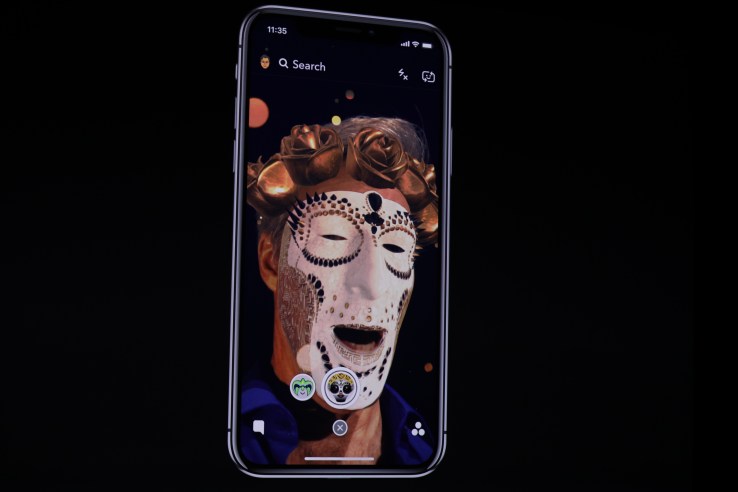 This means that the iPhone will know what your face looks like from all angles and can unlock the phone while it’s, say, lying on a table. It also means that the feature shouldn’t be susceptible to trickery, such as unlocking for a two-dimensional photo of you instead of the real thing. Apple says the chances that someone can trick FaceID and break into your phone are one in a million.

“You’re wearing glasses, or wear a hat, or do it up any way you want to do it…” FaceID still works, day or night, according to Phil Schiller. 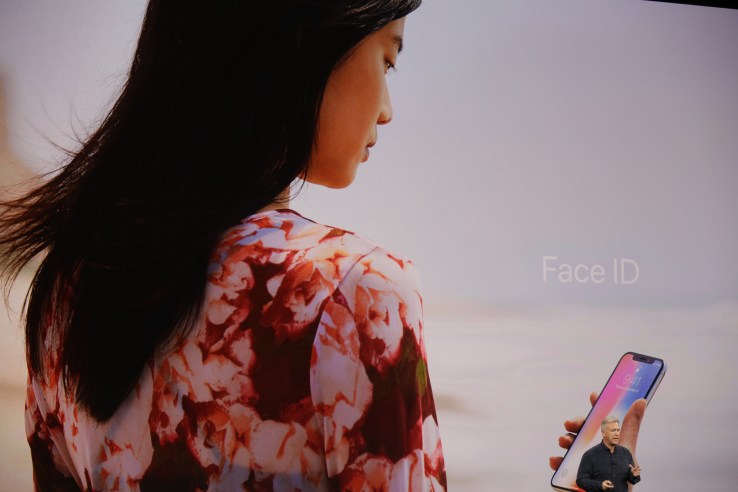 FaceID is enabled by a True Depth camera system, equipped with an infrared camera, flood illuminator, dot projector and more all packed into the top of your iPhone.

The feature is used for Apple Pay now, as well as a new feature called Animojis for messaging. Animojis use FaceID to lay your facial expressions into emojis, giving them your own unique take. You can pick from a dozen different animated emojis.

As far as cameras are concerned, the iPhone X is about as locked and loaded as one can get. The rear camera features a 12-megapixel sensor, with dual-lenses at f1.8 and f2.4 apertures (which is brighter than the 7 Plus telephoto). It comes with dual-image OIS quad-LED TrueTone flash. 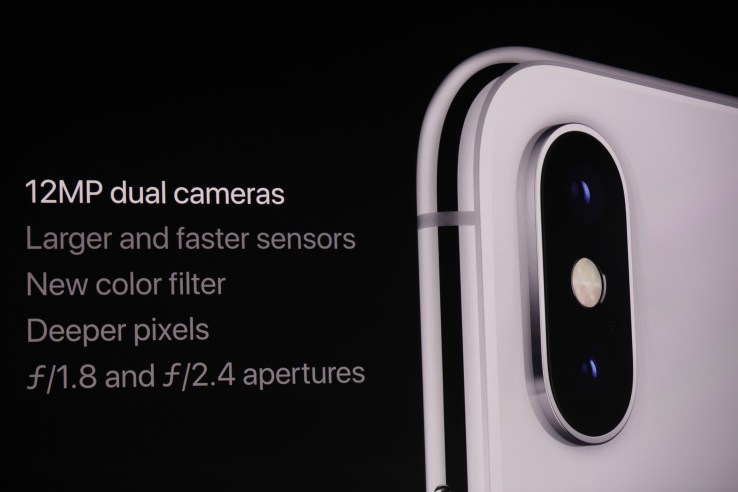 Because of the combination of the new A11 Bionic and the enhanced camera, Apple is introducing a new Portrait Lighting, letting users select their lighting effects. These aren’t filters, but rather a real-time analysis of the light hitting the subject’s face, and these lighting effects can be added before and after the photo is taken.

Video is vastly improved, as well. Combined with that A11 processor, video can be captured at 60FPS in low-light mode, with faster frame rate support and 4K capture. Slo-mo videos shot in 1080p will have 240 FPS.

Plus, battery life is two hours longer than the iPhone 7, with most of the improvement coming by way of software enhancements. But because Apple likes to take things to the next level, the wireless charging on the new iPhones is coming with a new accessory called AirPower. It’s a larger mat that lets users charge their iPhones, Apple Watch and AirPods all at the same time. 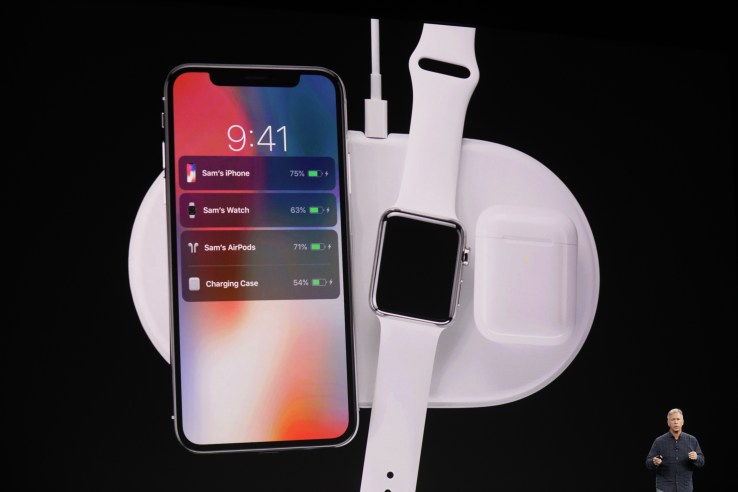 Part of the bigger news here is improved photographs. As Panzarino noted in the live blog, “The Apple ISP is one of its secret weapons in photography. If you’ve loved an iPhone picture you’ve ever taken, then thank the image processor inside the phone for that result.”

Pre-orders begin on October 27 and regular sales begin November 3, just in time for the holidays.