As reported earlier this month, Walmart’s streaming service Vudu has now arrived on Apple TV… with a few limitations. The new app allows you to watch the movies and shows saved to your Vudu library, including those you’ve added by way of UltraViolet, the digital video “cloud locker” technology that lets you watch digital versions of your DVDs and Blu-rays. However, like its iOS counterpart, the Apple TV version of Vudu doesn’t allow you to rent or buy videos through the app directly.

Instead, if you want to make a purchase, you have to do so through the browser or another device first. This same limitation is found in Vudu competitor, Amazon Video, which is currently only available on iOS, in terms of Apple device support outside the browser.

However, Apple and Amazon recently announced a détente of sorts, which will bring Amazon’s video app to Apple TV this year, increasing the competition for Vudu. Of course, it’s likely that Amazon will continue to limit purchases to the browser, as well, at that time.

This restriction on rentals and purchases is not because Apple won’t allow it – it’s because these companies don’t want to split the revenue generated from those purchases with Apple, which takes a cut of all transactions across its platform. They’d rather make such transactions more difficult and cumbersome for end users, rather than allow Apple – a competitor – take a share of their sales.

Beyond this limitation, though, the new Vudu app is much what you’d expect and simple enough to use. A no-frills interface includes only a few sections: My Vudu (your library), Movies on Us (Vudu’s collection of free-to-stream fare), Search and Settings.

The Movies on Us collection lets you watch thousands of titles for free, supported by ads. The Vudu app, meanwhile, offers a library of 100,000 titles, including many new releases. Through Vudu, UltraViolet movies can be watched and shared with up to five people. The app supports linking to your Disney Movies Anywhere account, too. 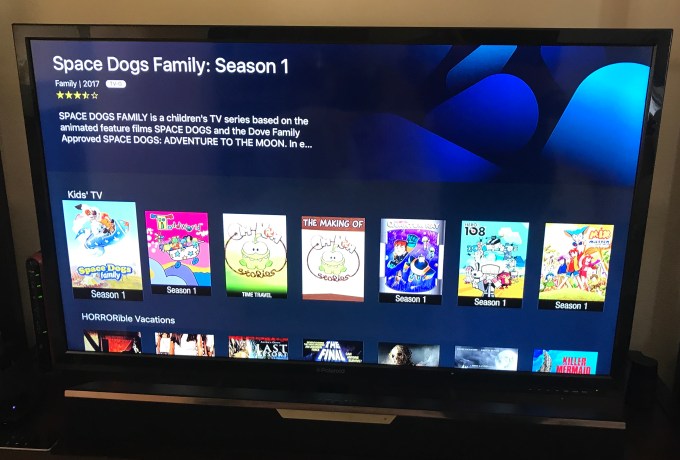 Even if you’re fully ensconced in the Apple ecosystem – which you must be to actually own an Apple TV (it’s not exactly the leading streaming device today) – there’s a reason to use an app like Vudu or, soon, Amazon Video, instead of iTunes: cross-platform support. While you may have nothing but Apple-made devices at your disposal, there could come a time when that’s no longer the case.

Maybe you’ll decide to throw a Roku stick on the bedroom TV, at some point, or buy the kids a Fire tablet on Prime Day. If that happens, your iTunes-bought video collection would be inaccessible, locked into Apple’s universe.

In addition to working Apple TV, Vudu works on iOS and Android devices; smart TVs; Blu-ray players; game consoles like the Xbox 360 and Xbox One, PS3 and PS4; and other streaming media players, like Roku, Chromecast, Android TV, and more.

Vudu was acquired by Walmart in 2010, but the retailer hasn’t fully leveraged the asset to challenge Amazon on the video front. Though promoted in Walmart stores, it remains a fairly low-profile offering, not a subscription-based alternative to something like Amazon Video, Hulu or Netflix.

Instead, Walmart last year introduced the free, ad-supported movies collection on Vudu – a way for it to enter the on-demand, streaming video market without having to build out its own, exclusive content library like the other major providers are doing. But that means Vudu is playing in a different field – its marketplace may compete with Amazon and iTunes, but its streaming service competes with Sony’s Crackle, or Yahoo View, the home to Hulu’s free content.

Prior to today’s launch, Vudu users could watch on Apple TV by way of AirPlay support. But this is the first time they’ve had a native interface they can browse with the Siri Remote. At time of writing, however, Vudu’s content has not been integrated with Apple’s TV app.