Wal-Mart Stores Inc. is taking on Amazon in what appears to be a copycat move — by applying for a drone-deploying blimp patent.

You may recall about a year ago Amazon filed a patent for a flying warehouse that will send drones to your door. Now Walmart wants in on Amazon’s idea.

The patent application, first noted in Bloomberg, shows the Walmart blimp would float about 500 to 1,000 feet in the air and contain multiple launching bays from which both human controlled and autonomous drones could fly out to make deliveries. 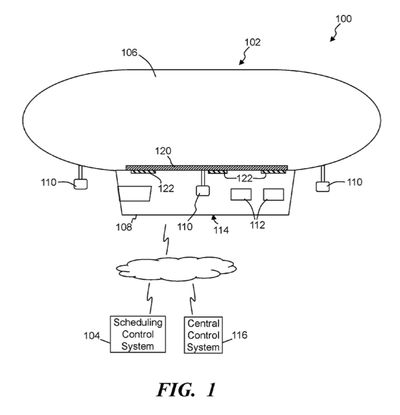 A moveable warehouse blimp could help Walmart cut costs by eliminating the need for both land and “last-mile” shipping often handled by third-party logistics companies.

This floating warehouse move is just the latest in a series between the two companies as they duke it out for shoppers’ dollars. Amazon is fast becoming a dominant competitor to Walmart, offering fast shipping and cheaper products, all without you having to set foot outside your door. But Walmart is still the largest retailer in the world and has a physical advantage over the “Everything Store” with brick-and-mortar locations throughout the U.S.

Not one to miss out on opportunity, Amazon has started to build its own physical locations in an effort to pull in more shoppers. It already agreed to pay Whole Foods $13.7 billion to acquire all of its upscale retail locations and is further expanding local grocery delivery through AmazonFresh.

But Walmart isn’t one to step back from a challenge and likely has other plans to take on Amazon’s delivery business plans.

Walmart is already testing drive-through pickup using automated machinery. Possessing a flying warehouse stocked with essential items could help give the retailer a needed edge over Amazon by offering super-fast shipping on top of the physical locations, automated pickup and wide selection.