Reinventing the email experience is an area numerous startups have tried to tackle over the years, with some apps focused more on triage, others on making a better desktop alternative to Outlook, and still more aiming to re-envision email as a mobile-first product, among other ideas. A new startup called Superhuman, from the founder of Gmail add-on Rapportive acquired in 2012 by LinkedIn, is different.

Instead of giving email a new coat of paint, Superhuman’s underlying technology is designed to speed up everything about using email, while also bundling in features like snoozing, scheduling, read statuses, undo send, insights from social networks, and more.

The startup was founded by Rahul Vohra, who incorporated Superhuman as soon as he left LinkedIn, where he worked for two years following Rapportive’s acquisition. Rapportive was one of the most popular Gmail add-on, as it put people’s social network identities, professional titles and other key information in Gmail’s sidebar, allowing you to quickly connect with them beyond the inbox. 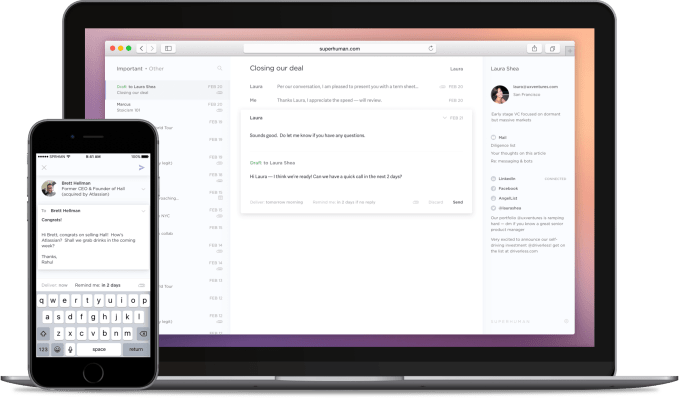 At LinkedIn, the product had shifted away from supporting other social networks – a decision Vohra admits he made knowing that those features – like its connections to Facebook and Twitter – wouldn’t receive ongoing maintenance.

Vohra spent a couple of years at LinkedIn, but has known for some time that Superhuman would be his next product.

“I always really knew that I wanted to start Superhuman,” he explains. “That was very clear to me as I was watching the email space change. We were asking ourselves the question: ‘what would Gmail look like if it was built today, not twelve years ago,'” he says. “We decided it would be blazingly fast; it would be visually gorgeous; the whole thing would work offline; you wouldn’t need a multitude of browser extensions to get things done; and people would be materially faster at doing their email.” 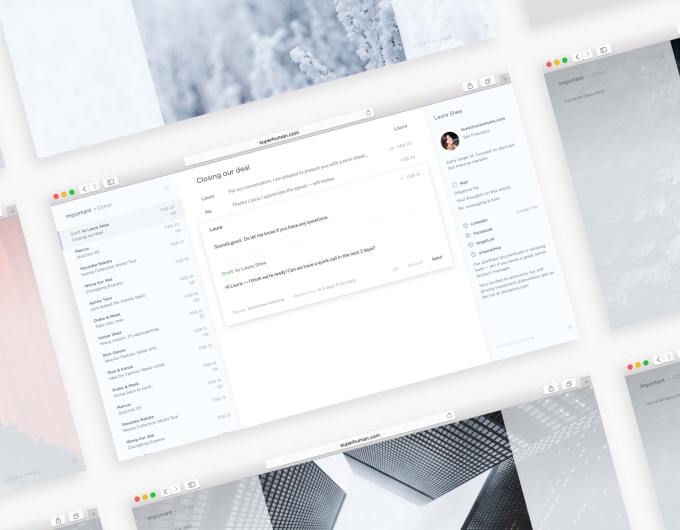 Though the app has a number of bells and whistles, the most interesting thing about Superhuman is that it’s largely a redesign of browser-based email with a focus on speed. Many of the next-generation email apps have launched first as desktop or mobile clients, by comparison.

Unlike most browser-based email, which is server-based, Superhuman can store and index gigabytes of email in the web browser itself. This is possible by leveraging today’s more powerful APIs in the browser, along with the faster CPUs and hard drives on our computers. 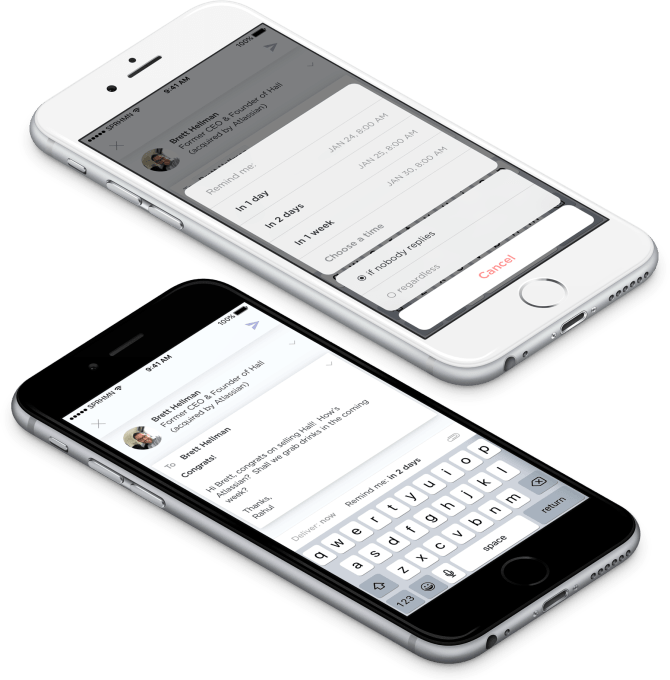 A product like Gmail couldn’t do this, because it needs to serve over a billion users – that means supporting older computers, out of date browsers, email over slower internet connections, and so on.

Superhuman, however, is only targeting a fraction of the email market: business users who will pay a subscription for a more powerful client. For this reason, the browser version of the email app only works in Google Chrome. But a desktop client, and later a mobile app, will also be available.

A core tenet of Superhuman’s reinvented inbox is one designed for speed. Everything that happens – searching, sending, start-up, etc. – will take place in 100ms. This is the speed at which people see the action as “instantaneous,” Vohra explains.

In addition, he says hundreds of other product decisions in Superhuman, each which may seem minor on their own, also help to make getting through the inbox faster.

In beta tests, the team has found that users who used to dig through their inbox for 3 hours per day are now cutting through it twice as fast.

Another key feature involves the way Superhuman aids with email triage. Similar in some respects to Gmail’s “Priority Inbox” functionality – an optional feature favored by power users – Superhuman understands which email is important based on historical usage patterns. But it also picks up some of the “important” emails that Gmail’s system ignores – like calendar invites, notifications about Google Docs updates, and other invites to collaborate on work. 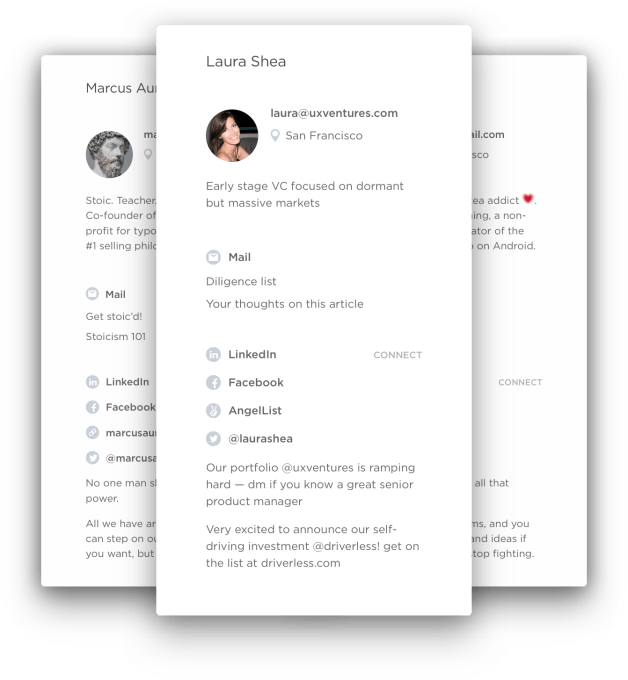 The app additionally includes a good handful of built-in functionality often not available in browser-based email without the use of plug-ins, or by switching on a “Gmail Labs” option. For example, an “undo send” is on by default; you can schedule emails for a later date and time; you can snooze emails; and you can even track who’s read the email, when and on what device, through a “read status” indicator.

This indicator will show you who among multiple recipients have read your email – something that differentiates it from simpler solutions that only know if an email has been opened or not.

And, not to worry, a Rapportive-like feature is available as well. Superhuman displays information about your contacts in the inbox – including profile pictures, where they live, job titles, and the option to connect with them on social networks like LinkedIn, Twitter, Facebook and elsewhere.

As to whether Superhuman can meet this ambitious goal of getting power users to not only abandon Gmail, but pay for the privilege of doing so is another question. It’s hard to give up the muscle memory and email workflow you’ve used for years, and everyone has their own set of email preferences. Many are game to try a new email solution, but retaining users over time is hard. 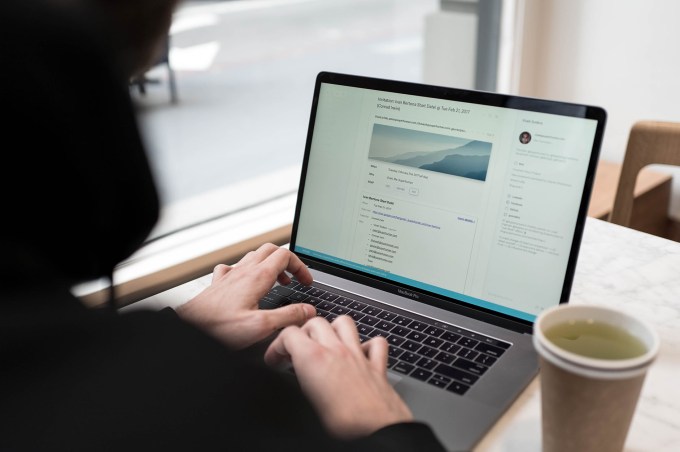 However, Vohra has assembled an impressive team to help. He describes CTO Conrad Irwin  … as the “best programmer you’ll ever meet,” and the “best programmer at LinkedIn.” Another co-founder, Vivek Sodera, co-founded LiveRamp which was sold to Acxiom for $310 million. Head of mobile, Emuye Reynolds, came from Apple.

“There are only fourteen people in the world who have been building iOS apps for longer than she has,”Vohra notes. The remaining team includes other ex-Apple, ex-Zynga, ex-Google, ex-Amazon, and ex-Facebook employees and engineers.

Superhuman, (which is not related to an earlier Superhuman also in the productivity space) is not making its product publicly available at this time during beta testing. But including this week’s soft beta launch on Product Hunt, it has racked up somewhere between 30,000 and 40,000 sign-ups for its waitlist. You can move up the list by tweeting about it, Vohra says. Sign-up is here.

The startup is in the process of closing on funding, but has been partially bootstrapped through Vohra’s personal investment until now.