Seattle seems like an unlikely venue for a duel between bike-sharing companies: it’s rainy, hilly, its residents can’t drive and another bike-share program recently went belly up publicly and ignominiously. But Ofo, one of several Chinese giants in the space, is the third company to launch in the city in a month. It’s the company’s first foray in the States.

Pronto, the service that crashed and burned here over the last two years, used dedicated docks in various ostensibly high-traffic areas. This inconvenient model is one of several reasons it ended up shuttering in May — after being bailed out by the city last year, no less.

The new services follow the much better model of letting users pick up and drop off bikes anywhere. It’s already hugely popular in China, where Ofo recently raised $700 million to expand operations. Its rival, Mobike, had just raised $600 million — the latest, in both cases, of several rounds in the hundreds of millions.

Bike sharing, and indeed cycling in general, has never been quite as commonplace in the U.S., especially in Seattle, which, despite having a healthy outdoors culture, is simply not suited for casual biking. That said, it’s still a dense, growing and tech-savvy city that won’t dismiss this type of service out of hand. Car-sharing platforms like ReachNow and Car2Go have been embraced wholeheartedly.

The city just issued two permits for bike-share programs last month, one for San Francisco’s Spin and one for San Mateo’s LimeBike, and both now have wheels on the streets. I’ve noticed the orange (Spin) and green (LimeBike) bikes everywhere, and people are indeed using them. 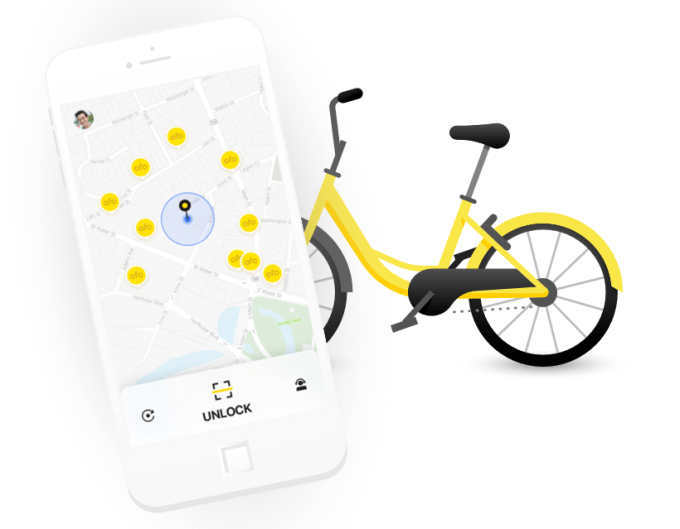 Ofo will be the third to join in, and aims to have a thousand bikes in the city by the end of the month. Like the others, you’ll rent one by scanning the QR code on its back. A buck gets you an hour, although all the companies are exploring other models for frequent users.

Curbed, which is keeping close tabs on the industry, got details on the actual bikes ahead of the official Thursday launch. They’ll have three gears, baskets up front and be more lightweight than those from rivals. That should help with Seattle’s many hills, and airless tires will prevent flats on our treacherous, pothole-filled streets. No helmets, though, which for casual riders are probably a good idea given how crowded our main thoroughfares are and how inattentive most drivers here are. Have I mentioned how unfriendly Seattle is to bikers?

All the bike-share companies are currently flouting Seattle’s helmet law, but it’s unlikely cops are going to give you a ticket unless you’re doing something really dumb. Yield to pedestrians, please!

Of course, like Spin and LimeBike, there will be significant “rebalancing,” i.e. trucks carrying bikes up from the bottoms of hills and snatching them from the boonies. One feature I’d like to see is the idea of putting bounties on bikes near you that need to be moved to better locations. Why send a truck when you can pay someone nearby a quarter to roll it along a few blocks?

We’ll see how the current platforms pan out over the remainder of summer, but the true test will be fall. And winter. And spring. It rains a lot here and ridership will drop like a rock.