Now instead of just posting a soulless “HBD” or “Happy Birthday!” on someone’s wall with no personal message, photo, memory, or anything that makes it feel sincere, you can post one of Facebook’s auto-generated, personalized birthday videos. Similar to the ones it shows on your friendversary with different people, the birthday video will show photos of you and the birthday boy/girl with stylized transitions.

These videos could make it just as easy to send something that shows you and a friend’s unique journey through life together as it does to send a generic string of text. That could make sending birthday wishes feel more authentic and valuable, and less like a boring chore. Facebook launched birthday message recap videos last year to aggregate text wall posts from all your friends into something more visual, but now each friend can send a happy birthday video. 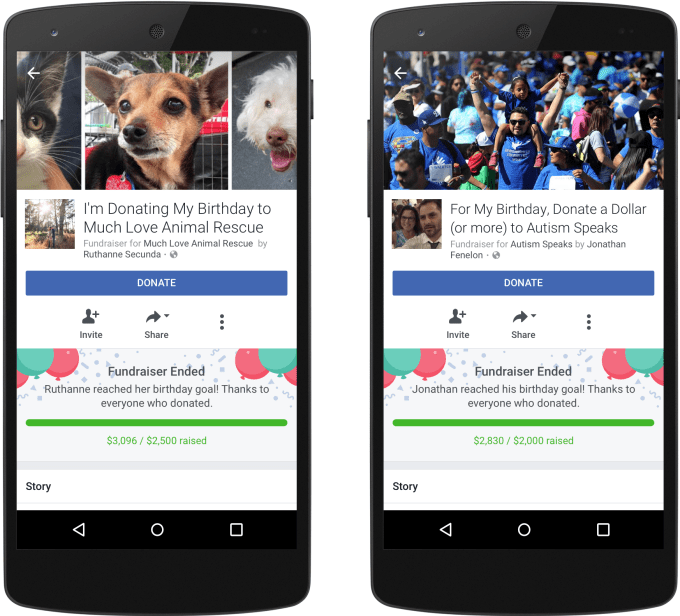 And now when it’s your birthday, you can easily dedicate it to a charity. Two weeks before your birthday, you’ll get a prompt to choose from one of 750,000 eligible non-profits vetted by Facebook. Friends will get a notification about your fundraiser, and be able to donate on your behalf as a birthday gift.

Facebook launched the donate button in 2013, and last year let people easily set up personal fundraisers. Facebook has received some flack for charging a 6.9% + $0.30 fee, but that covers processing, security, fraud, and vetting to ensure people are giving to real charities. Facebook has told me this is not a revenue generator, and in fact its fees are lower than what other donation platforms like GoFundMe charge.