Twitter shows some balloons and Snapchat wraps your messages like presents, but Facebook is where people celebrate birthdays online. Now to reinforce itself as the home for your personal content and connections, Facebook is launching birthday recap videos that assemble the best wall posts you got for your birthday into a cute little clip.

As long as you list your birthday in you profile and receive at least three wall posts or tags in posts on your birthday, the next day you’ll receive one of these recap videos. They’re cheesy but cute, with a magical cake bursting with social media posts.

The only concern is that the threshold might be a little low. Some people get hundreds of birthday well wishes, and their videos will probably be delightful. But other users might feel weird if the video just shows three generic “HBD!” wall posts from people they never talk to. It trumps up something people do pretty thoughtlessly into a spectacle that might seem vaguely dystopian. 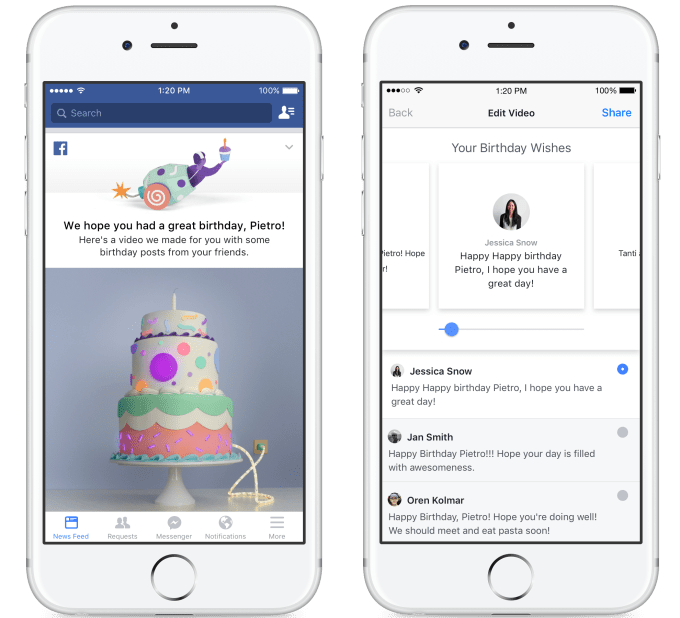 After you check out your video, you can choose to replace the photos or posts in it with the video editor, and then share it with friends if you want. Earlier this year Facebook launched Birthday Cam, which encourages people to send videos instead of generic “Happy Birthday!” text posts.

Perhaps it’s the culty culture at the company that makes employees think these things are important products to launch. But by doubling down on being a digital tradition, Facebook has one more way of making sure you keep coming back alongside its 1.71 billion other users.