Google’s consumer-facing chat application Allo, a successor of sorts to Gchat, is today available on the web for desktop users. The service, which lets you chat with friends while taking advantage of features like stickers, “smart replies” for one-tap responses, and Google Assistant integration, among other things, has been in the works for some time.

In February 2017, Google VP of Communications Products Nick Fox had tweeted out a screenshot of the Allo web client, saying then that it was still in “early” development. In July, Google Allo’s Head of Product Amit Fulay said the Allo web version would be released in a “few more weeks.”

As reported before, Allo on the web uses a similar pairing process to WhatsApp to connect its web client with your mobile device. Currently, this process only works with Android phones, but iPhone will be supported soon, the website indicates.

Allo for web is here! Try it on Chrome today. Get the latest Allo build on Android before giving it a spin https://t.co/OPn6Q5hdkg pic.twitter.com/awxr9wFvoD

To get started, you have to launch the web client in Google’s Chrome browser. You’ll then need to open Allo on your Android phone and then make sure you see “Allo for web” in the mobile app’s menu. From here, you’ll select “Scan QR code.”

With your phone, you scan the unique code that’s displayed on the Allo website, which will pair your app with the computer.

Because the web version merely mirrors what’s on your mobile device, if your phone runs out of battery and dies, you’ll no longer be able to use the Allo web app.

As expected, the web app looks much like it did when it was teased earlier this year. Its two-paned interface features your contacts on the left and chats on the right. Emoji can be added with a tap of the smiley button in the text input box, or popped up over to a right-side column, where you can also search for sticker packs.

Google Assistant is available as well, as on the mobile app, and will keep a history log of requests. 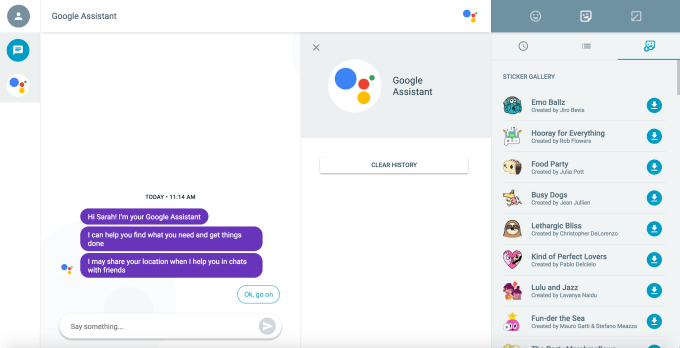 Google Allo was first introduced at Google’s I/O developer conference last year, alongside the video app Duo, with the goal of bringing Google’s smarts to a modern mobile messaging application.

But Google has muddied the waters of its messaging strategy. Not only does it run Allo and Duo (which would arguably be better combined, a la Facebook Messenger), it also split Hangouts into two apps – Chat, a Slack competitor, and video and audio communications app Meet. It has an Android Messages app for mobile as well, and it just broadly rolled out a new messaging platform within YouTube.

But given Google’s worldwide reach with Android, Allo topped 10 million installs via Google Play downloads last year, and Duo recently hit 100 million. However, Allo’s uptake was slow – it reached its first 5 million downloads in less than a week, but then took two months to double that again. Plus, the number of installs can only tell you so much – the real question is how many people actively use Allo? That’s a figure Google doesn’t reveal.

However, Allo may not be going after the developed markets so much as it’s trying to establish a foothold in emerging ones. For example, India now accounts for 38 percent of the total 21 million estimated downloads, according to data from Sensor Tower. The U.S., meanwhile, is second with 17 percent of downloads.