Facebook is rolling out a “Trending News” section on mobile that includes its own link in the app’s main navigation. This follows the company’s earlier announcement this spring of a redesign for Trending Topics, an increasingly important part of Facebook’s social network, where it tracks the news stories that are buzzing across its service. That redesign is now rolling out to users on iPhone and Android devices in the U.S., while the added navigational link to Trending News became available on iPhone over the past few weeks, and is in testing on Android, Facebook tells us. 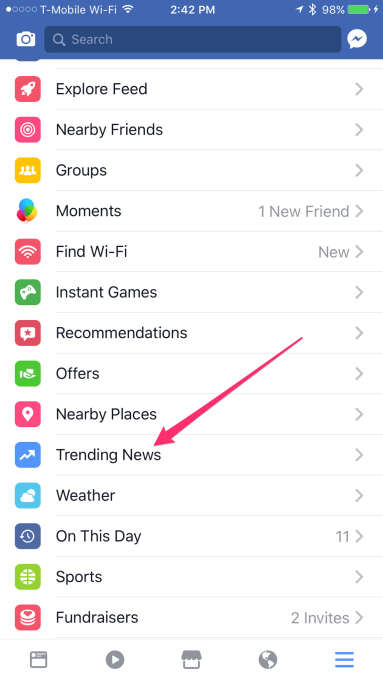 In case you missed Facebook’s announcement in May, the Trending Topics section was redesigned with a focus on making it easier to see how other publications are covering a topic, in addition to what friends and public figures are saying about the matter.

When you click into a Trending Topic following the update, Facebook explained you will see a carousel of stories from other publications that you swipe through horizontally. 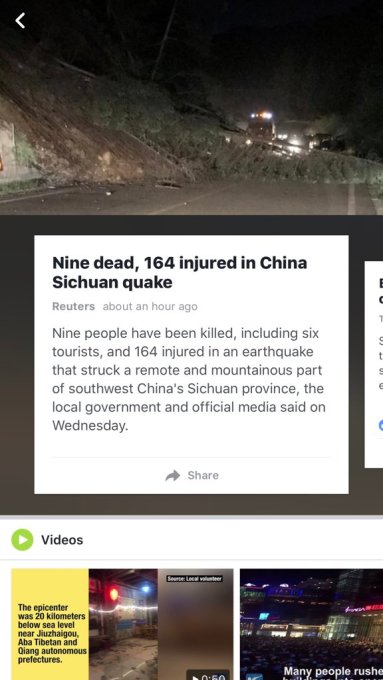 The publications linked to in this section are determined by engagement around both the article and publisher in general on Facebook, as well as what other articles are linking to it.

This card-style carousel look-and-feel was inspired in part by Facebook Paper, the company’s long since shuttered standalone news reading app.

This carousel is still in the process of rolling out across the U.S.

However, one aspect to Trending’s makeover that wasn’t really touched on during Facebook’s earlier announcement was how Facebook was toying with a redesigned list of news stories that focused on headlines, not just “trending topics.”

The original look for Facebook’s Trending Topics – which you pull up with a tap into the app’s search box – is a simple list of topics and the beginning of a lede that’s usually cut off. These appear below your own recent Facebook searches in the app.

However, if you access the new Trending News link that’s just popped up in Facebook’s navigation menu, you’ll see an entirely different sort of Trending section. 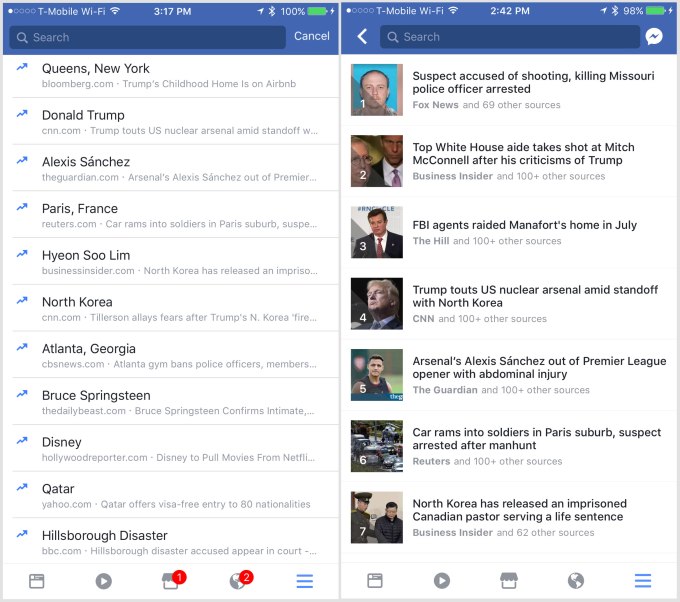 Instead of a “topic” (often just a word, person or place, like “China” or “Donald Trump”) and squiggly arrow icon, the news stories here include a headline, a photo, the name of a major media outlet that’s reporting it, and how many other sources are available on the topic.

For example, next to the headline, it might say: “Reuters and 100+ other sources.”

Plus, by adding the photo next to each item, there’s more room for expanded information – that is, a full headline and sourcing.

Facebook’s prior announcement in May didn’t specifically detail how this Trending News section looked different from Trending Topics.

Frankly, it’s all a bit confusing, because Trending Topics and Trending News don’t seem to be tied directly together at this point. For example, you could have the link to Trending News in your app’s main navigation, but still not have the new look for Trending Topics, which includes the carousel redesign.

However, in that same post, we did get a little peek at Trending News – but it was referenced as being a part of a “small test.”

Facebook said then it was testing adding the top three Trending News stories to users’ News Feeds. In a screenshot of this, you were able see this list of stories with photos that were ranked by numbers, as well as stories identified by headlines instead of just “topics.”

This integration of a “mini” Trending News section into News Feed is not broadly available. That remains a “small test,” we understand.

But the addition of the Trending News link to Facebook’s navigation is already live on iPhone, and being trialed on Android.

Of course, any changes Facebook makes to Trending are sure to met with a lot of scrutiny. The company last year faced criticism when it removed its human editors who curated this section, to run Trending by way of algorithms instead. (And those algorithms soon screwed up.) The social network has more recently made several changes to address the spread of fake news and filter bubbles, as well.

In this case, though, Facebook is not monkeying with how news is selected as “Trending,” only how it’s being displayed.

The new Trending News section joins a number of other new additions to Facebook’s main navigation as of late, including the food ordering option, Town Hall, weather, the Explore feed, and more. Not all these additions have stuck around – the new travel-focused City Guides section, for instance, has since disappeared.