Over the weekend, the security community raised legal funds for Marcus Hutchins, the researcher famed for stopping the spread of the malware known as WannaCry. Hutchins, also known as MalwareTech, was arrested by the FBI last week for his alleged role in disseminating Kronos, a banking trojan that first wrought havoc in 2014.

With a hearing set for Tuesday in Wisconsin, Hutchins’ many supporters have rallied to donate toward covering his legal costs. The fund was set up by former Symantec Cybersecurity Czar Tarah Wheeler and the tech law firm of Tor Ekeland.

“While we as a community do not know all the details about the charges against [Marcus Hutchins] (since few details have been published at this time), we acknowledge that all people have a right to legal defense and counsel in the United States when accused of a crime,” Wheeler wrote in a message that accompanies the donation page.

According to Ekeland, the LawPay-hosted fund was created as an alternative to GoFundMe. While the donation page was so popular that it crashed at one point, Hutchins’ supporters are working on a full accounting of donations.

“This was put together quickly over the weekend by our staff after Gofundme refused to handle the [legal defense fund] and we stepped in at the last minute,” Ekeland told TechCrunch. “It’s gotten a nice response, lots of people are donating, we just haven’t had a chance to go through it all.”

TechCrunch has reached out to GoFundMe for comment on its refusal to host Hutchins’ defense fund. 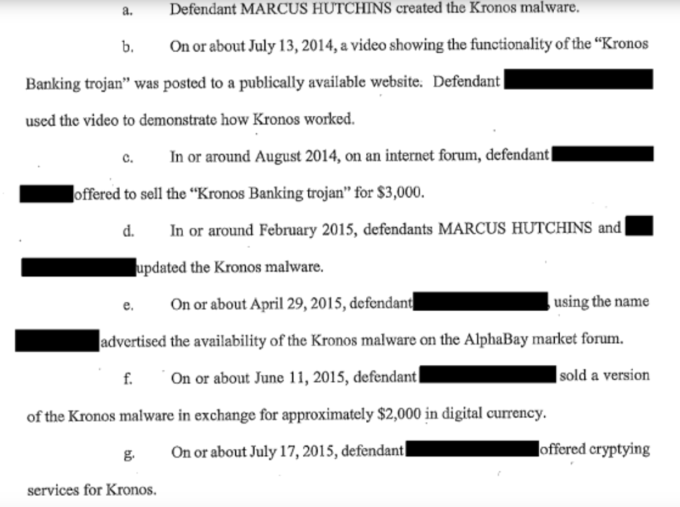 Hutchins faces an array of charges that include creating the Kronos code — sure to be legally murky territory — and offering it for sale on AlphaBay, the illicit online market shut down in a major bust last month. The young researcher pled not guilty to the charges in a Las Vegas court on Friday and is set to appear tomorrow in Wisconsin, the state where the charges were filed.