Big data analytics continues to be a key driver in how organizations utilise their vast quantities of information to run their businesses, and now a startup that has built a big data platform specifically focusing on data from the public sector has raised a round of funding.

LiveStories, a Seattle-based company that works with governments, education institutions and other public entities to structure and visualize civic data, has picked up $10 million to take its business international and to continue building out its platform.

The Series A was led by Seattle firm Ignition Partners, with participation from True Ventures and Founders Co-Op, bringing LiveStories’ total funding since 2013 to $13.9 million. The Seattle connection to LiveStories runs deep: its very first funding came from the Bill & Melinda Gates Foundation, a $75,000 grant in 2013 to help another grantee, Agra, make better use of big data.

Big data analytics has become an essential cornerstone in how enterprises do business: the mass of information that is a by-product of our increasingly digitised lives gets ordered for a number of uses: to create business intelligence, to feed machine learning algorithms, and to gain deeper insights into larger industry trends to help make better decisions. 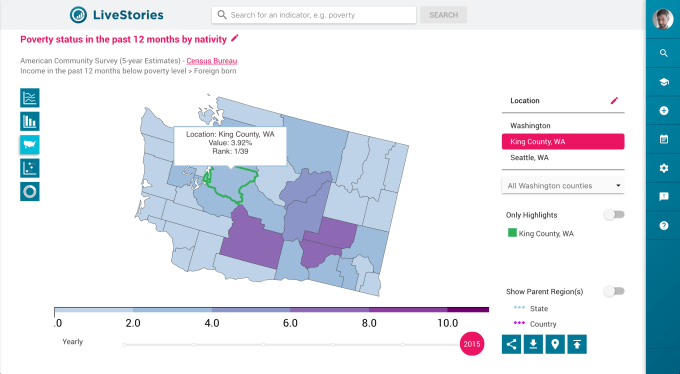 That same drive for big data applies to the public sector. But in many cases, the public sector lacks enough data scientists to do this kind of work for them, and having in-house systems leaves out something crucial: access to data from other organizations for comparative purposes.

LiveStories tackles the problem in two stages. First, the company works with non-profits; local, state and federal governments and bureaus and others to ingest what is essentially a mass of unstructured data. It then orders that data and provides a way for users to query it and, if they choose, create visualizations to better understand it.

Adnan Mahmud, the CEO and founder of LiveStories, tells me that as a measure of the size of the company’s data trove, currently there are about 2,000 indicators amassed over 50,000 locations, which can measure things like employment trends in a particular zip code, or comparing lung cancer rates between multiple cities, or obesity in a specific demographic in two geographies.

“There isn’t any direct competitor to what we do,” he said, explaining that the public sector data play can be roughly divided into two camps: the data warehouses and catalogues. You can use data warehouses like Enigma or even entities like the U.S Census to get raw data; and there are business intelligence tools like Tableau or Infogram or Visually to help make data more palatable, but often lack the depth of information that the warehouses have.

“We are the only ones who provide end to end to tools in one place and make this data accessible for internal use or to help tell stories.” Think of it in that regard as something like a way, way more public face of Palantir.

Mahmud started the company in part out of a desire to make public data more accessible as a way to tackle corruption. He hails from Bangladesh, and government corruption is rife in emerging markets, often going hand in hand with information suppression. It’s a poignant paradigm that sometimes feels like it could equally apply in developed markets, too.

For that reason, it’s important to highlight and champion the kind of work that LiveStories is doing. It may not be the most lucrative application of big data analytics — those will probably come from billion-dollar ad plays from the likes of Facebook and Google — but it feels like an essential one.

It currently has around 100 customers that include the City of New Orleans, the City of Melbourne, the California Health Care Foundation, and San Diego County.

Pricing isn’t published on the site, but Mahmud said that usually the starting point is around $7,500 per year for a five-user license. As time goes on and it grows, it will be interesting to see who will be the buyers of this data, what kind of insights the platform will be able to glean, and how that data may be used to help us build a better understanding of where we are as a society.

“Businesses are increasingly adopting technologies and techniques enabling data-driven decision making related to customers, products, and market. However, these same opportunities have eluded publishers and subscribers of civic data given the pervasive legacy approaches to data collection and curation,” said Bob Kelly, Managing Partner of Ignition Partners, in a statement.

It’s clear that it’s a market that still has a lot of room to develop: recall that Amazon has reportedly acquired another of the more prominent visualization players, Graphiq, which builds its visualizations using its own semantic search engine to source the data.

“Our investment in LiveStories was underpinned by three factors: first, LiveStories’ technically and economically efficient platform to ingest, clean, normalize, analyze and publish civic data gives it a competitive edge in the market; second, a large market that spans from small municipalities to federal governments, as well as a wide range of corporate buyers; and third, the vision that includes increasing transparency and applicability of data that impacts all of us.”