Services like Instapaper and Pocket are often used by consumers to save longer news articles they don’t have time to immediately read, and both services offer some form of narration for people pressed for time. However, a startup called Audm believes that there’s a better way to turn long-form journalism into audio content that’s actually enjoyable to listen to – by using professional voice actors to read the content.

The company’s mobile app was quietly launched last year, but they hadn’t made a formal announcement. The startup is currently participating in Y Combinator’s summer class, and put fundraising on hold while they complete the program.

Surprisingly, the idea for Audm didn’t come from founders with media backgrounds.

Co-founders Ryan Wegner and Christian Brink are both 2007 Columbia grads with backgrounds in psychology and software development, respectively. But they didn’t know each other in college, despite having a wider network where they were loosely connected through personal friends and family.

However, both were interested in doing a startup, and when they finally met up in 2014, the idea for an audio news app came together.

Both Brink and Wegner already loved listening to podcasts, and they realized that some of today’s great storytellers aren’t available in that format – they’re writing for magazines. But “their stories work for audio as is,” Brink explains.

Initially, they experimented with using crowdsourced narration, but soon found that people preferred higher-quality, professional narration. So they switched their business model.

The founders see some crossover between those who would use services like Pocket and Instapaper to get through long articles, but with Audm, they want to offer a better experience than the automated text-to-speech voice those services provide.

“Nobody is satisfied with that,” Brink rightly notes.

Using a network of voice actors working on contract, Audm converts long-form articles – meaning those over 3,000 words – into audio. 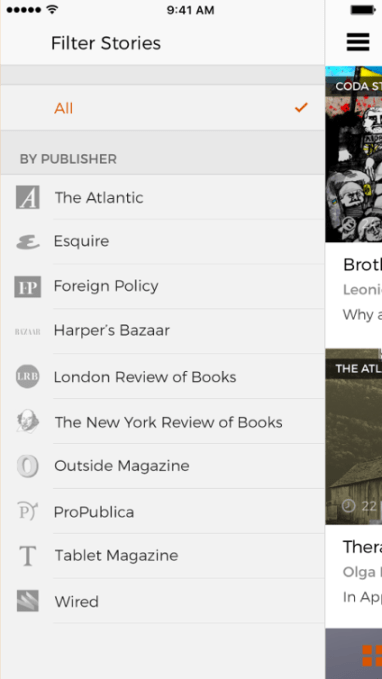 The focus is more on articles that can stand up to the test of time, instead of those focused on recent news. That means there are few articles covering things like day-to-day politics or the latest tech news, Brink says.

The company selects the best, long-form stories from their publisher partners for use in Audm, and releases around 5 to 9 articles per week on the service. That equals around three to five hours of content per week.

The audio versions of these stories are only available on subscription at a cost of $6.99 per month, and revenue is shared with publishing partners.

While there’s no current mechanism that would allow Audm to more directly compete with a service like Instapaper, the team does have a vision for a way to get more content into its app in the future –  for those times when Audm itself didn’t choose an article for its curated selection.

Audm plans to increase the distribution of a button that appears on publishers’ websites next to the content at hand that would effectively allow users to request a given piece to be added to its service. The company may also choose to offer a browser plugin for much of the same purpose at a later point.

When an article is seeing an influx of requests, Audm can then very quickly turn around narration – in as little as four or five hours – presuming they already have a contract in place with the publisher, and an audio actor is available to read. At present, Audm is working with a select group of around a dozen narrators, though it’s worked with around two dozen to date.

The Audm app is currently available only on iOS. And while it requires a subscription, the app itself is a free download.