Micro-investing app Stash has raised an additional $40 million in Series C funding, the company announced this morning, following rapid growth in terms of sign-ups from new users – 86 percent of whom are first-time investors. The startup’s app is designed to help ease people into investing by allowing anyone to start with as little as $5, then build a portfolio you contribute more to over time.

Stash competes in a market that’s now rife with apps for those looking for less traditional ways to invest, ranging from robo-advisors like Betterment, stock trading apps like Robinhood, and rival micro-investing apps like PayPal-backed Acorn, among others.

In Stash’s case, users don’t need to have a large amount of money set aside before getting started with their investment plans. Instead, you can set up an account in just a couple of minutes by connecting Stash’s app to your bank account. You can then access over 35 different investment options and receive personalized guidance to create your first portfolio.

Of course, because investments of small change will only lead to small results, the larger goal here is to get users comfortable with investing, so they’ll begin to automate the process by regularly transferring larger sums from their bank account, through the app’s “Auto-Stash” feature. 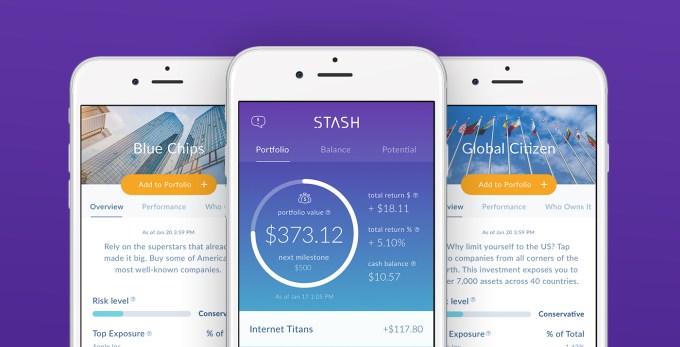 Like many others in this space, Stash aims to appeal to younger users and first-time investors, who are afraid of investing and uncomfortable using traditional tools. The company also notes that other people previously locked out of the market – like freelancers, military personnel, and teachers – are now using its tool to not only invest, but learn financial strategies.

This plan seems to be working. Stash says it’s now servicing over 850,000 user accounts, the majority having been created by a group of people who had never before invested their money. In 2017, the company said it added over half a million new investors to its platform, with over 25,000 new users joining every week.

Users can also customize their investments to their own beliefs and interests, Stash says, as it teaches you about the different sectors in an accessible, jargon-free way. Its financial education platform is today being accessed by over 1.5 million content subscribers, the company adds.

Stash in December had raised a $25 million Series B round, so this additional $40 million brings the startup’s total raise to date to $78 million – all raised under two years’ time.

The new round was led by Coatue Management, an investor in Snap and China’s Didi Chuxing.

“Stash is disrupting the financial services industry by removing barriers and making investing more approachable and accessible to the 100 million-plus Americans on the sidelines,” said Coatue’s Founder and Portfolio Manager Philippe Laffont, in a statement. “Its rapid growth in a short period of time shows that Stash has found a way to transform how Americans manage their money and gain financial independence,” he added.

Existing investors Breyer Capital, Goodwater Capital, and Valar Ventures also joined the Series C round. The startup is now valued at $240 million, according to Business Insider.

The company says it plans to use its new funding for further investment in its own technology and data analytics, which will allow it to offer more personalization, educational tools and other new products. One such product in the works, Stash Retire, will be launched on mobile this summer.