In a new study published in Nature, a group of scientists at Harvard have successfully stored a GIF— yes, like a moving meme — into live bacteria (E. coli to be specific).

It’s a weird idea, but scientists have actually been using the genetic wondertool known as CRISPR or “clustered regularly interspaced short palindromic repeats” for data storage parlor tricks for some time.

CRISPR, explained in a bit more depth here, makes all sorts of wild things possible and people are rightfully excited about it. Those revelations are often reserved for geneticists and health researchers, but the Harvard experiment and others like it demonstrate CRISPR’s utility even beyond its vast, untapped potential in the world of medicine.

As a very short primer, CRISPR-associated proteins (in this instance, specifically proteins known as Cas1 and Cas2) act as a DNA version of a computer’s Ctrl-X tool, allowing scientists to pinpoint specific segments of DNA, cut them out, fiddle with them and even replace them altogether. 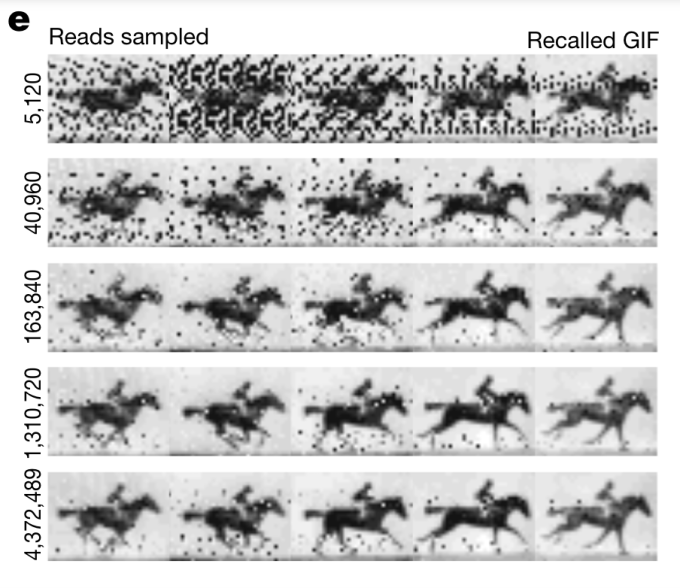 Due to its dynamic, if brief, nature, encoding the historic horse GIF posed unique challenges over say just sticking any old static image into living bacteria (though they did that too). By utilizing Cas1 and Cas2’s sequencing abilities, the researchers encoded the temporal order of the GIF frame by frame and were able to extract and put it back together with 90 percent accuracy.

As the paper explains:

“When harnessed, this system has the potential to write arbitrary information into the genome. Here we use the CRISPR–Cas system to encode the pixel values of black and white images and a short movie into the genomes of a population of living bacteria. In doing so, we push the technical limits of this information storage system and optimize strategies to minimize those limitations.”

Remarkably, the bacteria went on multiplying, apparently unconcerned with its data stowaway, even passing it along to future generations through its genetic material.

This is molecular-scale stuff, but the ideas are huge. It’s not really about scaling up the computer hard drives that house our vacation photos, though that’s a bonus.

In interviews, lead author Seth Shipman suggests that it’s a proof of concept exercise meant to model a future in which cells record a kind of living record of their own existences. That record could be accessed and replayed by anyone who wanted to learn more about how that cell was behaving or interacting in its environment over time.

If that cell is a neuron, the potential insights into the human brain are as vast as the 215 petabytes of data researchers have managed to cram into a single gram of DNA. And if that doesn’t knock you out, with similar techniques, scientists could hypothetically store all of the data ever generated by the human race in a single room.

“DNA is an excellent medium for archiving data,” the researchers write. No kidding.