A new report from Nielsen out this week paints a picture of the booming on-demand audio streaming business, pointing to a significant increase in consumers’ use of streaming services and record numbers of streams being served. According to the mid-year report, which focuses only on the U.S. market, on-demand audio streams surpassed the 7 billion figure for the first time ever during March of this year.

That’s audio streams, to be clear – not just music.

That is, the term “audio” also includes non-music streams like spoken word recordings and podcasts – the latter of which has also seen rapid growth. Nielsen isn’t breaking out music versus non-music streams in this new report, but a prior figure from the measurement firm stated that monthly podcast consumption had doubled over the past five years among adults.

Still, the rise of streaming music services like Spotify and Apple Music have surely played a role in reaching the new milestones.

Meanwhile, on-demand audio and video streams combined have surpassed 284 billion streams this year, an increase of 36.4 percent over the same time last year. 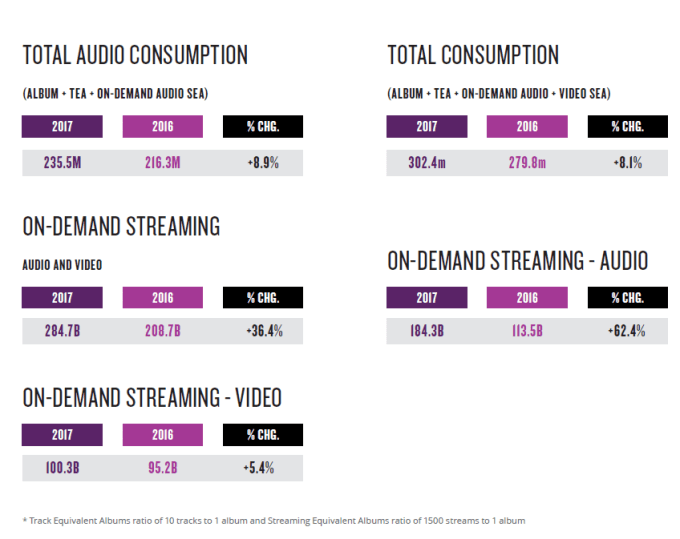 These increases are seemingly coming at the expense of album sales, both physical and digital.

Physical album sales were down 17 percent; digital albums were down 20 percent; and ‘track equivalent albums’ (aka 10 song sales, which is equal to one album), were down by 20 percent as well. In other words, there’s less demand to buy music and “own” it when you can just stream.

The report also looks into some of the specific winners, in terms of artists, noting that the top streaming on-demand song during the report’s time frame (including both audio and video combined) was Ed Sheeran’s “Shape of You,” with over 2 million downloads sold and 4.53 million units (i.e., metrics from on-demand streaming).

More data on artists is in full report is available here.