Blue Apron will be going public in short order, kicking off the second big major consumer IPO of 2017. It’s nowhere near as big as Snap, but the company at the top end of its IPO pricing will be valued at around $3.2 billion as it looks to raise nearly $600 million.

The company’s IPO comes at an interesting time as we approach the midpoint for 2017, which has seen a big wave of IPOs since Snap went public at the beginning of the year. But since Snap went public, its stock has cratered. There have been a lot of successful enterprise tech IPOs — especially much smaller ones — but it’s not clear if the so-called IPO window will remain open in the back half of the year.

And of course there are big questions for Blue Apron now that Amazon made a big bid for Whole Foods. The company, which delivers ingredients for meals directly to consumers’ homes, is a very new kind of business that will be hitting the public markets. We’ll see how it performs soon, but in the mean time, here are some major questions that we’ll see some answers for when it makes its debut:

Did Snap ruin everything for consumer IPOs?

So let’s get this out of the way: Snap did cause a lot of trouble in its last earnings report. The company had a successful IPO “pop,” but since then the stock has cratered down to its IPO price. Despite that successful IPO — the first big consumer IPO of the year — there may be a lot of skepticism around consumer IPOs. While Blue Apron runs a complex web of logistics and data analysis, at the end of the day it’s also selling a consumer experience for users (cough millenials cough) that they might not otherwise get without access to good ingredients.

The Snap crash’s biggest effect is probably the shadow it has cast over advertising services that are alternatives to Facebook and Google. Those companies make up the majority of digital advertising budgets, meaning it’ll be a harder sell for Pinterest, Twitter and Snap that their ads are as effective (or more) or target a different kind of audience. Blue Apron isn’t an advertising service, but it’s still likely going to be caught up in the dragnet that Snap has dumped onto potential consumer IPOs.

Is Amazon now a threat to meal kit delivery services?

This is the big elephant in the room. Amazon last week made a huge bid for Whole Foods, potentially giving it ownership of hundreds of stores across the country — that all have access to fresh ingredients and a good brand to go with that. This couldn’t have come at a worse time for Blue Apron, which is on its road show and trying to convince investors to pour cash into the startup as it goes public. While this story hasn’t exactly played out just yet, it’s not a stretch to think what Amazon could do with hundreds of nodes with fresh ingredients in areas that are Blue Apron’s sweet spot.

The company priced its IPO between $15 and $17 per share to raise as much as $587 million earlier this week. The hope for a pricing like this is it’ll produce a “pop” when the company finally hits trading. But with this announcement happening right as Blue Apron tries to woo Wall Street, the company may have to settle for a more conservative price. We’ll have to wait and see, as Wall Street may completely ignore the deal, but either way it has cast a shadow over the IPO. 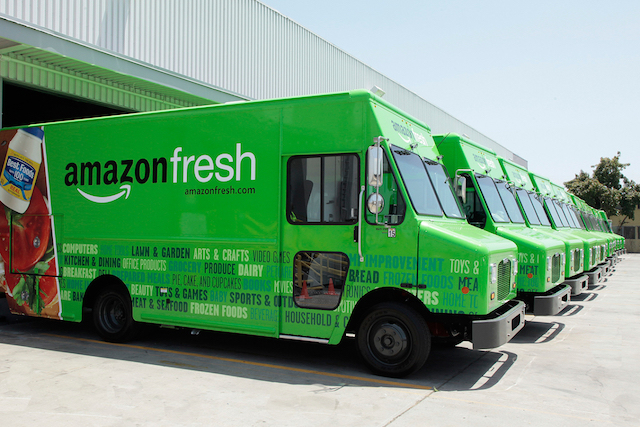 Is the on-demand sector still healthy?

As an addendum to that, Blue Apron will likely give us a read on the on-demand sector. This whole area has struggled, with a lot of food delivery startups shutting their doors. Instacart was able to raise $400 million at a $3.4 billion valuation earlier this year, but now has to untangle itself from a complicated relationship with Amazon — which may end up owning Whole Foods, and thus a slice of Instacart.

Blue Apron has shown that its deliveries are continuing to grow, but it also has to show that isn’t going to greatly slow down, which may come across as a signal that people are slowing their usage of on-demand delivery services. Blue Apron’s growth is naturally going to slow as it grows into a larger company, but if consumer spending drops off on-demand delivery services may be the first to feel a squeeze. While Instacart is private we won’t really get a good look into the demand for that consumer behavior, but Blue Apron may give us some early signals.

Can Blue Apron break into markets outside of the youths?

A majority of Blue Apron’s users are still in the 25-34 year-old range — in its IPO filing it said around 36%. While it still has a diverse audience, that presence among older potential customers with more buying power is going to be critical for the company as it goes forward. Blue Apron meals aren’t ridiculously expensive, but definitely aren’t cheap, so it needs to make sure it has a healthy customer base that can afford to buy it on a recurring basis. 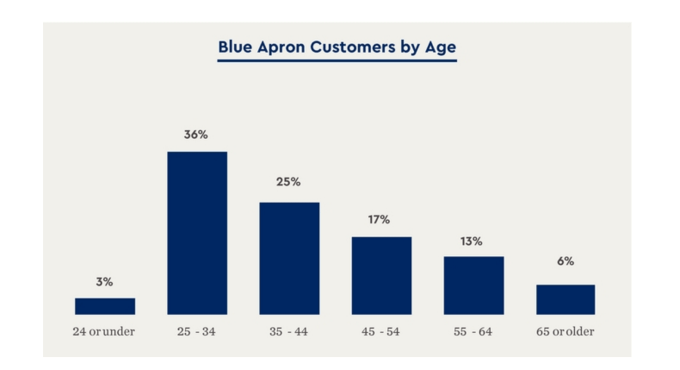 As it ramps up its marketing spend it needs to grab customers that can return the value of that marketing spend and keep them. Getting a customer to come in and buy something from a promotion is a good entry point, but the real value is going to be buying the second, third and fourth meals. Blue Apron’s business is one that can capture a lot of lifetime value for a customer, but the acquisition cost — because of ticket price of the meal — can also be very expensive.

Is the IPO window still open?

Snap was the first big (and initially successful) consumer IPO, and a ton of smaller enterprise startups like Okta and Yext followed suit. A big pop for Snap signals a lot of demand for fresh IPOs. That means that a lot of startups are going to try to get out the door and raise capital through an IPO, which also offers a liquidation event for investors and employees. A lot of these IPOs have been successful, but if Blue Apron’s is not it may mean that Wall Street is pulling back on that risk and looking for safer bets. There are also a variety of macroeconomic effects — like the Fed raising short-term interest rates  — that may affect the appetite for an IPO like Blue Apron. We’ll likely get a good read as to whether we’ll see a lot of these smaller enterprise companies racing to get out the door, as well as other potential big consumer IPOs, in the back half of the year.