Earlier this month, Google virtual reality head Clay Bavor discussed the company’s efforts on a mind-boggling 20 megapixel screen that was currently under development. The screens would be a staggering 17x resolution improvement on displays in current generation VR systems like the Rift and Vive. They would also be totally unusable, because at the frame rates needed for VR, such displays would burn through 50-100 GBs of data per second.

The key for working this out would be utilizing a technology called foveated rendering to track where a user’s eyes are looking and ensure that only the area at the center of their vision is being rendered at full resolution.

While this will undoubtedly be a technology that enables the future of high-end VR, it’s still one that relies on expensive displays that aren’t even widely available yet.

A Finnish startup is positing that they’ve come up with a way to bring human-eye level resolution to VR headsets through a technique that will direct a pair of insanely high-resolution displays to the center of your vision. With current technology, the company claims this will enable perceived resolutions north of 70 megapixels.

Varjo, which means “shadow” in Finnish, is looking to bring this technology to higher-end business customers by next year at a price of “less than $10,000” according to the company.

Why show off this tech now? Largely because the company is currently raising cash stateside and was just awarded a few patents related to these technologies last week.

I had the chance to demo a prototype of the company’s technology last week using a modified Oculus Rift headset with Varjo’s display systems embedded.

I suppose the best testament to the company’s technology was that I spent most of the demo questioning whether my eye sight had actually been improved. After being dropped into an apartment scene, I was almost disturbed by my ability to read the spines of books on bookshelves several feet away. 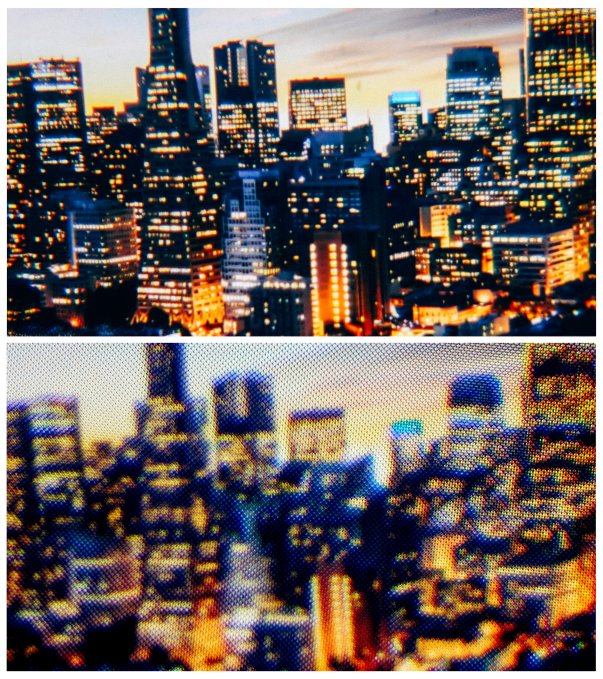 The technology all relies on a pair of insanely high-resolution Sony MicroOLED displays which pack full HD into screens .7 inches in size diagonally. Through lens magnification these 3,000 pixels per inch displays fill up about a 20-degree field of view which is reflected off of mirrors in the headset while the wider scene is displayed on a more normal resolution display in the background.

Though this “bionic display” rig I tested simply utilized fixed “focus” displays at the center of my vision, the company is building systems that actively adjust the mirror to your gaze, ensuring that you are always seeing the most high-res image possible. Getting the latency of these mirror shifts will be a non-trivial challenge for the startup, especially given the limitations of eye tracking at the moment.

Varjo wants to take on companies like Magic Leap, Microsoft and Meta to create mixed reality headsets that build upon its display technology, though this technology isn’t really suited for transparent display systems like waveguides so it would still rely on pass-through camera displays to pull of the mixed reality.

The company claims that they have no interest in licensing the patents they have been awarded and is instead looking to create an end-to-end solution, focusing primarily on business customers early-on. The first step will be a development kit of their “20/20” headset which the startup hopes to make available to hundreds of partners starting later this year.