Apple is introducing a new feature in iOS 11 that will help users free up space on their iPhone by offering personalized recommendations about actions they can take to increase the available storage. The feature will go a long way towards helping all iPhone owners get better control over their phone’s storage, but will be especially useful for those who own one of Apple’s entry-level models, like the 16 GB iPhone 6 or 6S, for example.

It could even help those with a 32 GB iPhone 7 or 7S, which critics argue is still not enough storage, due to the large file sizes of some apps and games, camera features like Live Photos or those let you shoot in “raw” formats, and support for high def video – including 4K video – all of which take up more space.

A number of third-party tools – often in the form of photo compression apps – have emerged over the years to help with this problem, but now Apple is addressing it head-on.

Though Apple didn’t detail how its new “free up storage” feature would work during its keynote at WWDC, a number of users have tweeted and blogged about the addition since.

From the screenshots (see below), you can see how iOS 11 will make suggestions about managing storage based on what’s clogging up your own iPhone, instead of just offering generic, all-purpose tips and tricks.

Also the iPhone Storage settings screen has been revamped to give you suggestions on how to save storage space #ios11 #wwdc17 pic.twitter.com/P1YY2KbLdQ

For some users, that may mean pushing them to turn on iCloud for their photos and videos, or emptying out the “Recently Deleted” photo album. For others, iOS 11 may suggest they review and delete the large attachments and large conversations found in iMessage – a place people often don’t think of when freeing up storage space.

You can even configure your iPhone to automatically delete old iMessage conversations. 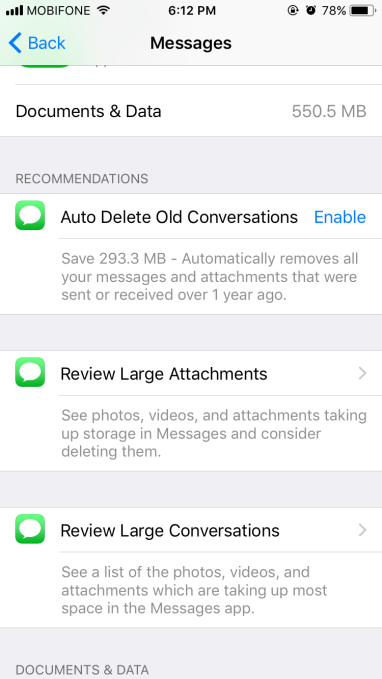 And it may suggest cleaning up the content in other Apple apps, like Mail, TV, Photos and more.

However, helping users get a handle on how their apps are using storage space isn’t the only way iOS 11 will aid in the quest to win back free space. Another feature – and one that may instill fear in developers whose apps suffer from infrequent use – will allow iPhone users to “offload” their unused applications.

The feature is found both in the “iPhone Storage” screen and in the “iTunes & App Stores” screen, in iPhone’s Settings, in the iOS 11 beta.

By toggling this switch on, you’ll be able to automatically remove the apps you don’t use, while still keeping their documents and data. If you choose to reinstall the app from the App Store (assuming it’s still available) all the data will return as well.

This might be more useful though for apps that have a large file size – like some games – rather than those that house a lot of data, like Facebook. That’s because the app itself is removed from the phone but the app’s data remains.

What’s not yet clear is how iOS 11 is determining which apps count as “unused” as the dialog box doesn’t explain. Offloading can also be done on a more manual, app-by-app basis from the iPhone Storage screen’s list of installed apps.

Storage space issues can be a problem for any iPhone owner, but they more often plague those with lower incomes, and who can’t afford the best devices. They’re the ones opting for the free, low-cost or older iPhone when they sign up for wireless plans.

In other cases, people simply choose the wrong-sized iPhone for their needs, because they don’t understand how newer technologies and features – whether that’s better cameras or support for offline downloads from streaming services like Netflix – will ultimately impact their phone’s storage.

In any event, this will be one of the more welcome changes in the new iOS 11 that’s released to the public this fall. Of course, the irony here is that users most in need of this feature might not have the available disk space download the iOS upgrade.