Facebook has launched a new feature that makes it easier for users to share their views with their elected government officials directly from a Facebook post. In the “Compose” window that pops up when you prepare to write a post, there’s now a new option that lets you search for and add your representatives’ information to your post.

The idea is that as you’re expressing your political views on a matter via a Facebook post, you can share that you’re contacting your representative about the matter and encourage your family, friends and followers to do the same.

The feature is available to both individual users and Facebook Page owners, as you can see in the screenshots below.

Our own TechCrunch account was able to access the option through a dedicated icon in the Compose window. However, on individual profile pages, it’s been integrated into the “Feelings & Activities” section under the option “Contacting…”

Above: contacting government reps from a Page 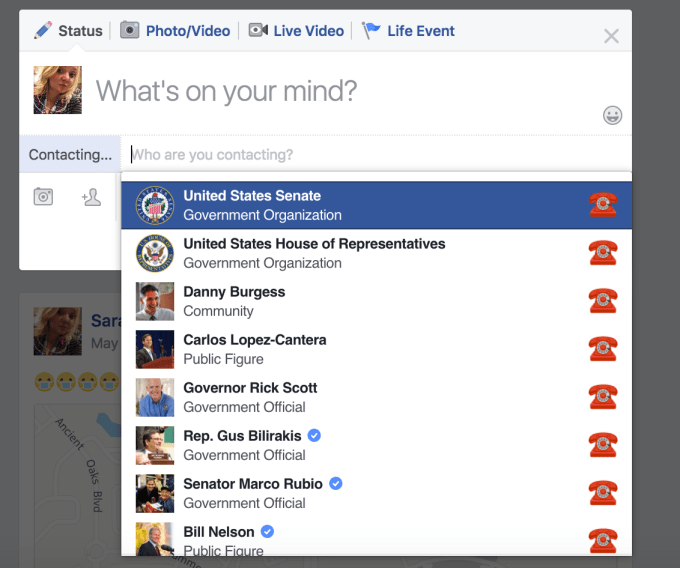 Above: contacting government reps from a profile

The feature, which is available on both web and mobile, doesn’t really tag the government rep in question or alert them to your post. But it makes reaching out to your rep via Facebook only a click away, by attaching their names, titles and a contact button to your Facebook post.

This is the latest addition to Facebook’s Town Hall platform — a recently launched initiative designed to make it easier for Facebook users to locate, follow and contact their local, state and federal government representatives via the social network. 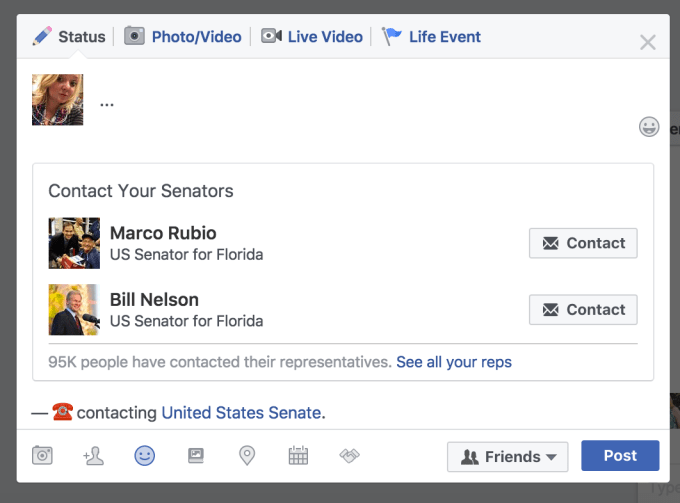 Town Hall officially launched to all U.S. users in March, where it’s available from Facebook’s menu navigation, as well as through various integrations with the News Feed. For example, Facebook previously introduced a feature that invites you to call, message or email your rep when you like or comment on one of their posts. You could then share a post to your own profile alerting your friends of your political action.

Before now, these sorts of Town Hall features were only available to those who were already engaging with their government representatives on Facebook, or who were actively seeking their reps’ information. With the new integration into the “Compose” box, users who may have otherwise been just sharing their own personal, political opinions may now be encouraged to take action — and prompt others to do so, as well.

“This feature makes it easier for people with common interests to share their views with their elected representatives,” a Facebook spokesperson explained.

Facebook first began rolling out the integration in the Compose box in early May, the company tells us. It reached all users in the U.S. as of last week.