What do popular dating apps and brick-and-mortar storefronts have in common? Until now, nothing.

But that’s about to change, as Bumble, the popular female-led dating app, is opening a pop-up location in New York City.

Bumble is calling the space the Hive, and it will be a month-long installment designed to be a space for dates, Bumble fans and really anyone — to just hang out and soak in the Bumble brand.

The space is really decked out in Bumble’s unique flavor — click through the album below to see the space.

A physical location is the first step in the dating startup’s attempt to formalize the community that has naturally formed around the Bumble brand. While some dating apps are still considered taboo, Whitney Wolfe, founder and CEO of Bumble, explained that Bumble’s brand now extends beyond just dating, and is something people are proud to associate themselves with — even if they aren’t necessarily using Bumble for dating.

This focus on community also meshes with the startup’s plans to eventually expand on BumbleBIZZ, which is Bumble’s attempt to help users with professional and social networking, and retain users who may not necessarily be looking to date.

While the space will be open during the week for couples to meet up (or friends to just stop in and check it out), there will also be a series of events focused on relationships, female entrepreneurship and more. For example, Bumble founder Whitney Wolfe will host a panel with the founders of theSkimm, Drybar will be hosting style sessions and Forbes will be hosting a Mentor & Mingle session. 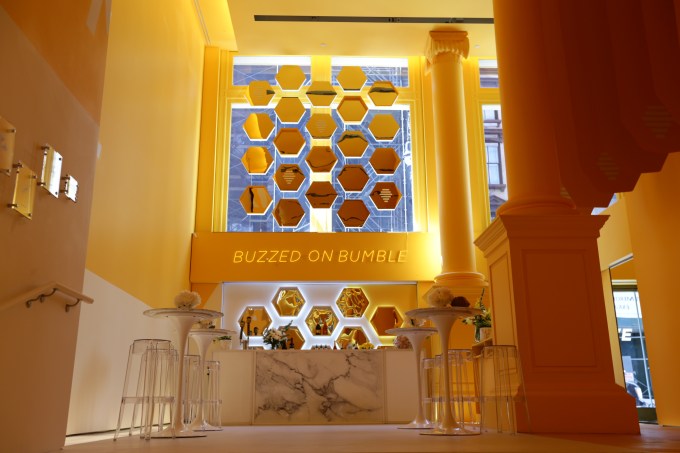 The space will also have a coffee (and real) bar, as well as Bumble merchandise for sale (where all proceeds go to charity).

Bumble said the current plans are to keep it open for a month, but isn’t ruling out the opportunity for an extension, or potential expansions into other cities.