theSkimm founders Danielle Weisberg and Carly Zakin came onstage at Disrupt NYC 2016 today to tell us how to capture one of the most coveted audiences in media – millennials.

Part of it is serving up digestible news that matters to 20 to 30-somethings and being honest about the way you advertise to them.

For those who are unfamiliar, theSkimm is a new kind of email newsletter changing the way young professionals read the news with a hint of irreverent wit.

The startup launched a little over a year and a half ago and has quickly grown to more than 3.5 million subscribers worldwide – or more than the number of New York Times digital subscribers. 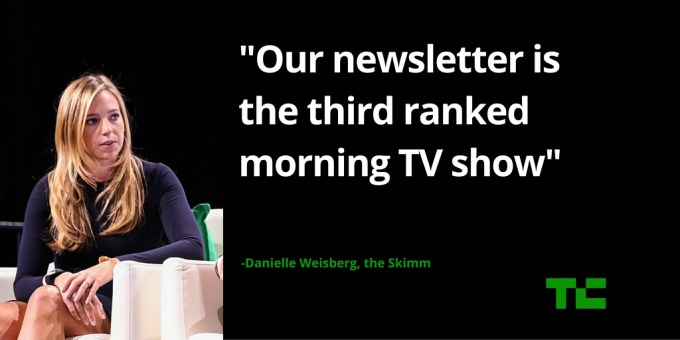 Note the Times, which has more than 1.3 million digital subscribers, is a paid subscription and not free like theSkimm’s newsletter base. Separately, the NYT newsletter subscription numbers are in the “tens of millions,” according to the Times.

theSkimm platform includes the daily newsletter, the Daily Skimm, as well as the Skimm Ahead, Skimm the Vote, and Skimm Guides such as what to look up on Snapchat, a brief on the Panama Papers or what the Kardashians are up to.

Both founders hail from careers in broadcasting but quit their jobs to make news accessible for their friends not in the news business.

And the material seems to be hitting the right nerve with young professionals. theSkimm now captures the attention of millions of “millennials” (those 18 to 34) with a hint of the duo’s irreverent editorial wit.

theSkimm also implements a grassroots approach to growing the audience rapidly and has about 13,000 “Skimm’bassadors” spreading the word.  Skimm’bassadors get rewards such as tote bags and other swag for telling their friends to sign up and read.

theSkimm has also figured out how to monetize in a way they say makes sense to a new generation – by being honest about the products they endorse on the platform and utilizing native advertising.

The startup’s SkimmAhead app helps add a second source of revenue for the company by charging $2.99 per month to keep subscribers updated on the latest events and what’s about to hit Netflix.

Simply put, “Looking at your phone is the new definition of ‘me time’,” says Weisberg, “We want theSkimm to make the news easier on your time.”