Facebook Live might be about bringing the entire community together around events, but sometimes you just want to know the reactions of your buddies.

Facebook has already announced that its AR camera effects platform will be coming to Live, an announcement today brings a couple of other changes to the platform surrounding social interactions in Live: Live Chat with Friends and Live With.

Comment streams on popular Live videos are a bit overwhelming at the moment, there’s a pretty torrential outpour of similar reactions to when something happens on video. Facebook says that there are actually ten times as many comments on Live vides as there are on regular recorded videos.

Ultimately, Facebook wants to help you sift through the visual spam and have more meaningful interactions on these videos, which is why they’re adding a feature that lets you easily live chat with friends inside Live videos.

When you create a private chatroom, you’ll have the option of inviting new people or just finding out who among your friends is already watching and toss them into a private room. It’s a way for Facebook to dial-in the wide-reaching Live platform and make it more personal for users. People can still easily jump in between group feeds and friend chat. 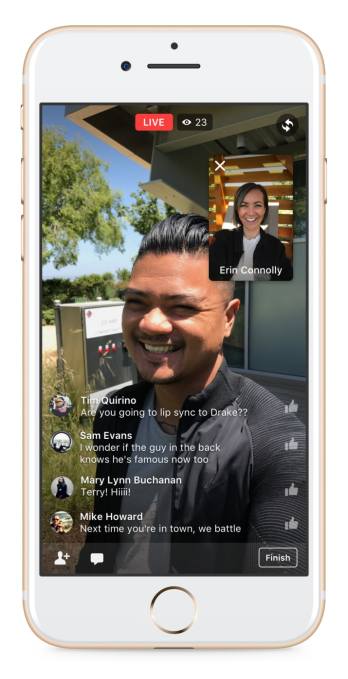 In addition to the Live Chat with Friends feature, Facebook is launching a feature that will let you go live with another friend in a side-by-side conversation. This feature was previously available to public figures, but now it’s rolling out wide, allowing you to argue or chat with friends in a Live setting.

Live With basically allows you to FaceTime with your friends in a public setting, it’s a completely different way to capture social interaction and it definitely offers something new.

You have these conversations in landscape mode for a split-screen style or portrait for picture-in-picture mode as seen in the image.

Live With is open for all profiles and pages on iOS. Facebook is already testing Live Chat with Friends in a few countries and says they’ll be making it more widely available later this summer.